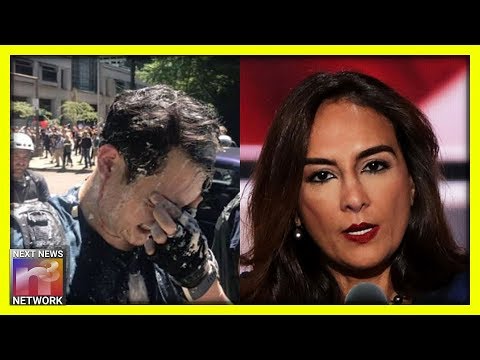 Andy Ngo is a journalist who suffered major injuries, including a brain bleed, from Antifa attackers last weekend in Portland Oregon.

His beating was just one of several, including an elderly man that was beaten with what appeared to be a crowbar.

Next News Network is reporting that Ngo’s lawyer is ready to extract justice from Andy’s attackers.

Here’s Gary Franchi with the latest…

Attorney Harmeet Dhillon on Andy Ngo Attack: I Intend to Sue These People into Oblivion – I Don’t Care if They’re Bankrupt (VIDEO)

First skirmish I’ve seen. Didn’t see how this started, but @MrAndyNgo got roughed up. pic.twitter.com/hDkfQchRhG

Goodnight everyone except Antifa criminals who I plan to sue into oblivion and then sow salt into their yoga studios and avocado toast stands until nothing grows there, not even the glimmer of a violent criminal conspiracy aided by the effete impotence of a cowed city government.

On Tuesday night Harmeet Dhillon announced that she was ready to sue all of the people involved in this brutal attack, including possibly the mayor and police force, into oblivion!

Harmeet told Raymond Arroyo, “I don’t care if they’re bankrupt or living with their parents.”

A legal fund has been set up to help Andy Ngo.
Please donate below.

In response to many requests, a legal fund has been started to raise funds for a lawsuit against both private and public parties who contributed to the multiple assaults on @MrAndyNgo (and others) this weekend in Portland. You may contribute here: https://t.co/5QBvTMPI13

Michelle Malkin also came to Ngo’s aid this week with her own fundraiser.

I find it incredibly ironic that Andy, a gay man, hired a CONSERVATIVE attorney and is being defended & aided by a staunch CONSERVATIVE journalist.

Andy does consider himself conservative, but come on…

He’s gay and a person of color.

Where are the bleeding heart liberals that should be dying to help?

Antifa is not what it seems.

The group has only one real mission and that is to foment violence.

There are no shared values or goals other than to create chaos.

Americans are not stupid.

We all see what Antifa is doing and there may soon come a day when these silly kids regret carrying crowbars to a gun fight.