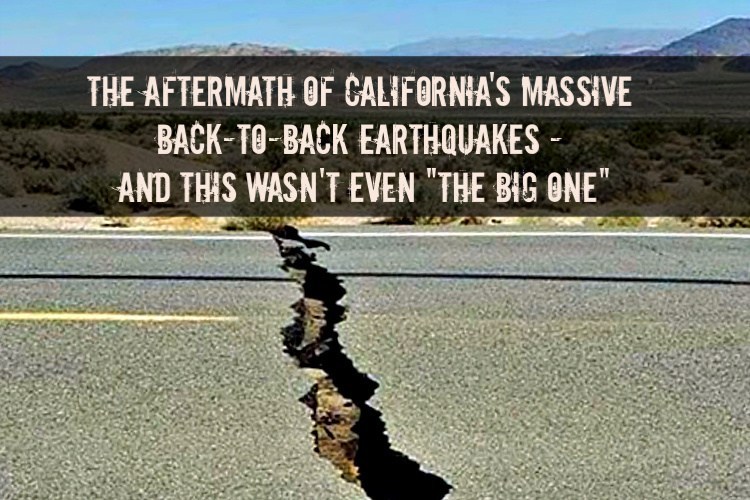 Since Thursday, Southern California has been hit with a series of earthquakes and aftershocks all the way up to two that measured 6.4 and a whopping 7.1 magnitude. The epicenter of both quakes was near the town of Ridgecrest, with a population of nearly 29,000 people.

On the Fourth of July, the strongest earthquake in 20 years struck, with the epicenter in the Mojave Desert. This earthquake registered a 6.4 on the Richter scale. The tremblor resulted in cracked roads, leaking gas lines, house fires, and multiple injuries.

Among the aftershocks was a 5.4, at 4 am Friday morning.

But that wasn’t the worst of it. More than 1700 aftershocks hit the area, which, according to seismologist Zachary Ross, “might be slightly higher than average.” Initially, it was believed that the Independence Day earthquake was the main one, but it turned out to be a foreshock.

“The quake was felt downtown as a rolling motion that seemed to last at least a half-minute. It was felt as far away as Las Vegas, and the USGS says it also was felt in Mexico.”

….There were reports of trailers burning at a mobile home, and State Route 178 in Kern County was closed by a rockslide and roadway damage.

But Kern County Fire Chief David Witt says it appears no buildings collapsed. He also says there have been a lot of ambulance calls but no reported fatalities…

…Mark Ghillarducci, director of the California Office of Emergency Services, says there are “significant reports of structure fires, mostly as a result of gas leaks or gas line breaks throughout the city.”

He also says there’s a report of a building collapse in tiny Trona. He says there could be even more serious damage to the region. (source)

California governor Gavin Newsome has declared a State of Emergency. There have been fires, gas leaks, power outages, water outages, road damage, and rock slides. While only one building was reported to have collapsed, Kern County Fire Chief David Witt warned that other buildings may have been weakened after being hit by two quakes in a matter of just over 24 hours.

Los Angeles was rocked by the quakes.

Although no major damage was reported, Los Angeles felt significant movement from the second earthquake.

In downtown Los Angeles, 150 miles away, offices in skyscrapers rolled and rocked for at least 30 seconds.

The Los Angeles commuter rail service Metrolink said on Twitter it has stopped service in the city of 4 million people for the time being.

Juan Fernandez and Sara Donchey, two news anchors for the local CBS affiliate in Los Angeles, were seen live on the air seeking shelter as the quake struck on Friday.

‘We are experiencing quite a bit of shaking if you bear with us a moment,’ Donchey said. ‘We’re making sure nothing is going to come down in the studio here.’ A visibly terrified Donchey then grabs Fernandez’s arm.

The Naval Air Weapons Station in the Mojave was evacuated.

The Naval Air Weapons Station in China Lake has evacuated all non-essential personnel and their families.

The installation in the Mojave Desert covers an area larger than Rhode Island and is the Navy’s largest single landholding.

The Facebook post says normal operations were halted until further notice and it was not clear when they would resume. (source)

Trona, known as “the gateway to Death Valley” because it’s the last town before the Mojave Desert, suffered extensive damage.

Fire officials say as many as 50 structures in the small town of Trona were damaged by the magnitude 7.1 earthquake Friday night in Southern California.

The town was temporarily cut off after the earthquake, when officials shut down a highway connecting Trona to Ridgecrest because of rockslides and cracks in the roadway.

Julia Doss, who maintains the Trona Neighborhood Watch page on Facebook, said residents reported that chimneys and entire walls collapsed during the quake.

She said the only food store in town has been shuttered. (source)

If you’ve ever driven through Trona, you know it’s not a wealthy town. Residents will be hard hit by repair bills.

It’s not over for the Ridgecrest area.

According to PBS, the affected area can expect hundreds more aftershocks.

The U.S. Geological Survey predicts a greater than 99% chance for a moderate earthquake (magnitude 5.0) within the next week. They also expect the region to experience 360 to 660 minor aftershocks (around magnitude 3.0) in the same amount of time. (source)

Dr. Lucy Jones, a seismologist for the California Institute of Technology (CalTech), says that the aftershocks of this quake could go on for years.

People throughout Southern California have been warned to prepare for the possibility of even more strong earthquakes. Go here to learn how to survive an earthquake and check out my book, Be Ready for Anything to get prepared for a lengthy aftermath.

While these two quakes shook things up pretty dramatically, they don’t even hold a candle to the long-expected “Big One,” according to seismologists.

Michael Snyder wrote of the quote above:

Of course that figure is just an estimate and it is based on a hypothetical magnitude 7.8 earthquake.

Theoretically, a magnitude 9.0 earthquake would release 7,943 times as much energy as the Ridgecraft earthquake, and that would easily be the most destructive natural disaster that we have ever seen in all of U.S. history up to this point.

And please don’t think that such a quake can’t happen.  Scientists admit that the San Andreas fault has the potential to “move for many feet almost instantaneously”… (source)

So, no, as big as it was, this was NOT “The Big One” that Californians have been dreading for decades. It wasn’t even on the same fault line as the one causing the most concern.  Read Snyder’s articlefor more details.

Even in a small town like Ridgecrest and those surrounding it, looting and burglary has erupted after the quakes damaged buildings and took down critical infrastructure. Mayor Peggy Breeden told reporters that some “bad people” came into the community and tried to steal items from businesses.

The mayor of Ridgecrest says there were two reports of burglaries in the Southern California city following the 7.1 earthquake Friday night.

Mayor Peggy Breeden said Saturday that some “bad people” came into the community and tried to steal items from businesses.

Police Chief Jed McLaughlin said one business was burglarized, with an expensive piece of equipment stolen.

A home was also broken into and police are waiting to see what was taken. (source)

Fortunately, it looks like the looting is relatively minor at this point. But when the legendary “Big One” strikes, people may not get so lucky.

It’s important to remember that the aftermath of natural disasters can be the most dangerous time, particularly in areas with higher populations. Every prepper should have a home defense plan for situations such as these.

Perhaps the most newsworthy part about this entire situation is the fact that Democratic Governor Gavin Newsome, an ardent supporter of California’s Sanctuary State declaration, has said some really nice things about President Trump, who is working hard to reduce the number of illegal immigrants in the United States.

Gov. Gavin Newsom says President Donald Trump has called him and expressed commitment to helping California recover from two earthquakes that hit the state in as many days.

Speaking to reporters after touring the damage zone, Newsom said Saturday that he and Trump talked about the struggles California has been through, including two devastating wildfires that happened just six months ago.

The Democratic governor said “there’s no question we don’t agree on everything, but one area where there’s no politics, where we work extremely well together, is our response to emergencies.”

“He’s committed in the long haul, the long run, to help support the rebuilding efforts,” Newsom said of Trump. (source)

What preppers can learn

It’s always important to study disasters when they occur. We can learn a lot, including what the emergency response looks like, what kind of damage was incurred, how soon the looters show up, and the struggles people face in the aftermath.

During these two earthquakes, there was property damage but injuries were limited. A number of fires occurred, probably due to electrical systems shifting. Gas lines leaked, the power was out for many, and public water lines were damaged. There is no place to purchase food if you don’t have it, or to buy or acquire water. Anyone unprepared out there in the dryest desert in America is at the mercy of emergency responders.

Evacuating isn’t easy due to cracked roads and rockslides. (This is why it’s always important to have multiple routes out and a versatile bug-out plan.) However, looters, said to be from out of town by Mayor Breeden, arrived fairly quickly.

Will things calm down for the Ridgecrest area?

Here’s hoping that the 7.1 is indeed, the biggest to hit these areas, although the once-per-minute aftershocks must surely be unsettling.

Those living near the San Andreas fault line should take note of what happened in this small town and use the information to prepare for the Big One that is at least one hundred years overdue.

For those of you living in California, Nevada, and Mexico, did you feel the quakes? Did you sustain any damage? Let us know in the comments section below.