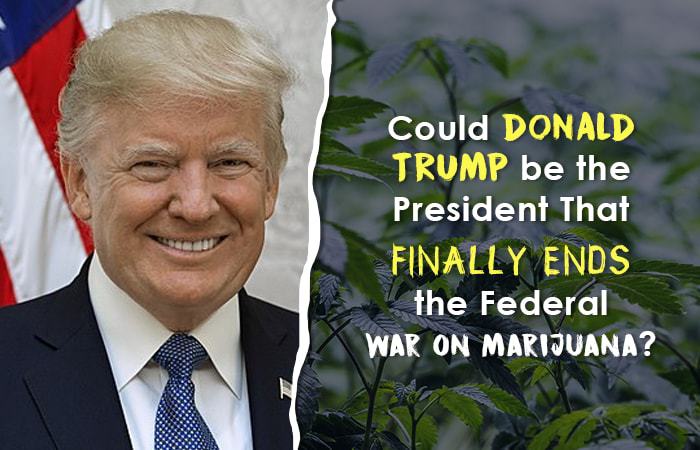 Believe it or not, the administration’s war on the legalization of marijuana may soon come to a halt. Or is it?

Two known political figures, Colorado Senator Cory Gardner and Massachusetts Senator Elizabeth Warren, introduced the Strengthening the Tenth Amendment Through Entrusting States Acts. It aims to help make sure that every state reserves its right to determine and decide the best approach to marijuana within its jurisdiction.

And President Trump seems to be an advocate of the bill.

In a statement, he said that he fully supports the senators because he believes that they know exactly what they are doing. Although he is looking at it, he said that he’s likely to end up supporting it.

Furthermore, President Trump also believes that the government is losing the war against marijuana. So, as a way to solve the problem, he is considering legalizing it.

But what does it really mean?

Well, the bill doesn’t really say anything about legalizing marijuana. Based on federal law, marijuana is still considered as a scheduled 1 drug which basically says that it is still illegal and has no medical value.

It does, however, protect the businesses of legal marijuana. In case you own and operate a business in a state that considers marijuana legal, the bill can help ensure that you won’t be targeted by the federal government- as long as you abide by the rules.

It also allows the said businesses to access banks without the fear of causing issues with the law. The banks won’t have to worry about working with legal cannabis companies, too.

The Two Sides of the Issue

People who support the legalization of marijuana insist that legalizing it will eliminate the harm that comes with marijuana prohibition. This includes racial disparities when it comes to arrests, the tons of money that circulate in the black market for illegal marijuana, and the use of money for its harsh operations worldwide.

For them, legalizing marijuana far outweighs the possible downsides of the act.

On the other hand, those people who oppose it claim that legalizing marijuana will just cause more problems. For one, there’s the risk of misusing it which can lead to more negative health issues.

Now, whichever side you belong, there’s one thing you have to consider- your safety.

For your health, make sure that you only purchase and use high-quality CBD products. They are still unregulated which means that there’s a huge risk that you’ll end up using low-quality and contaminated products.

When it comes to legality, you need to be fully aware of the laws in your state. Knowing that the president will possibly back up the new marijuana bill isn’t a guarantee that you’ll be protected. It pays to know the laws and comply with what they require.

So, in looking for the right CBD product for you, make sure that you’re as thorough as possible in doing your research. Look for products that contain 0.3% THC or less so you won’t end up with legal problems. Here’s a highly informative blog you can start with.