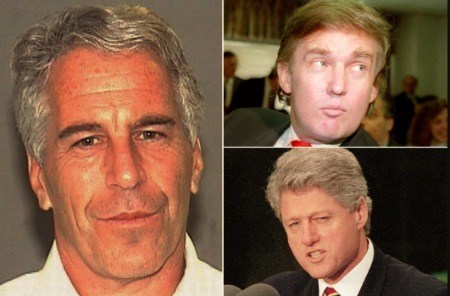 Former president Clinton on Monday issued a statement on new sex trafficking charges against billionaire financier Jeffrey Epstein, saying he knew nothing about the “terrible crimes” Epstein is accused of.

“President Clinton knows nothing about the terrible crimes Jeffrey Epstein pleaded guilty to in Florida some years ago, or those with which he has been recently charged in New York,” the statement from a Clinton spokesperson reads. – Source: The Hill

Bill Clinton, who flew on the Lolita express 26 times, has no idea about the terrible crimes Jeffrey Epstein has committed?

Maybe not these specific crimes, but I’m sure he remembers plenty of his own.

Before long, no one will even know that Clinton was one of Epstein’s best customers.

The fix is in…

The internet is scrambling to protect Slick Willy.

Clinton flew on Epstein’s ‘Lolita Express’ private jet at least 26 times and this was reported by multiple media outlets in 2016.

However, any reference to this on Epstein’s Wikipedia page disappeared for a time yesterday before being added back in.

The current Wikipedia page for Epstein does mention his link to Clinton but devotes more words to the billionaire’s ties to Donald Trump, which were less direct.

The current entry contains Trump’s 2002 quote about Epstein: “I’ve known Jeff for fifteen years. Terrific guy. He’s a lot of fun to be with. It is even said that he likes beautiful women as much as I do, and many of them are on the younger side.”

However, it fails to mention that Trump kicked Epstein out of Mar-a-Lago as soon as he discovered Epstein had hit on a young girl.

Read the rest at Prison Planet…

Is this whole story another attempt to set up President Trump?

It sure looks like the wind is starting to blow in that direction.

Things are about to get real.