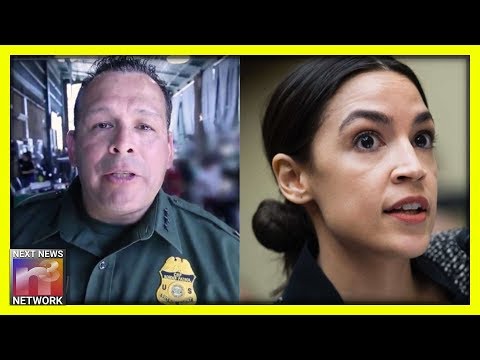 Alexandria Ocasio Cortez has been lying about what is happening on the Southern Border.

I Love My Freedom reports:

Socialist Rep. Alexandria Ocasio-Cortez made some highly controversial and misleading comments earlier this week about a migrant detention facility.

In response, the U.S. Customs and Border Patrol released a video proving that she lied by claiming that migrant women are being forced to drink water from the toilet.

“Good afternoon,” Chief Patrol Agent of the Border Patrol’s Tuscon Sector, Roy Villareal, says into the camera at the start of the video.

“Today is July 3rd. My goal today is to dispel some of the misinformation that’s out there in regards to our detention facilities. So, come with me,” he said, before walking to a nearby supply room.

“This is a supply room that is typical in every one of the stations in Tuscon sector,” he says.

Pointing out supplies around the room, Villareal says: “What we have supplies of are diapers, baby wipes, clothing for children, marked by gender, age. Clothing for men and women. We’ve got supplies… These are feminine hygiene products that are readily available for any of the detainees.”

“Now, come with me as we go into one of our detention cells. Here in front of me is a supply cart that is available to families and unaccompanied children,” he says, stopping at a cart stocked with goods. “Baby formula, crackers, raisins, tuna fish, Mylar blankets.”

Picking up a packaged toothbrush, he says: “Here’s one of the aspects, there’s a lot of misinformation that we are not allowing people to brush their teeth,” in a reference to reports that migrants claiming they had not been given regular access to toothbrushes or toothpaste.

In addition to The Border Patrol, we also reported last week that even Hispanic Pastors claim AOC is lying:

What makes this even worse is the Marxist propaganda media giving credence to AOC’s disinformation and lies without touring the facilities for themselves.

Rep. Ocasio-Cortez has been intent on painting America as an unjust country as she endeavors to convince voters that only her Marxist philosophy can save them from Trump, capitalism, and hell.

That was the case after she toured two border detention facilities and then, if Reverend Samuel Rodriguez is telling the truth, lied about what she had seen and experienced.

Rev. Rodriguez was so alarmed that he arranged to tour the same facilities immediately upon reading the allegations made by Rep. Ocasio-Cortez.

After his tour, Rev. Rodriguez, the President of the National Hispanic Christian Leadership Conference, speaking on behalf of a group of pastors who toured the facilities along with him, reported something entirely different:

I read the reports, saw the news clips. I just wanted to see what was actually happening in order to better enable our efforts to find a fair and a just solution to our broken immigration system.  To my surprise, I saw something drastically different from the stories I’ve been hearing in our national discourse. Even as a veteran of immigration advocacy in the U.S., I was shocked at the misinformation of the crisis at the border.”

“We found no soiled diapers, no deplorable conditions and no lack of basic necessities.”

Pastor Carlos Moran is an NHCLC board member and immigrant:

“We, as evangelical leaders that serve in different segments, are very committed to helping children regardless of their status and we commend those officers that are trying their very best to serve and fulfill their duty at the border. However, we do call on our political leaders to set aside their personal agendas and begin focusing on resolving this immigration crisis.”

Rev. Samuel Rodriguez (center), president of the National Hispanic Christian Leadership Conference, with an accompanying delegation of pastors at the Clint Patrol Station this weekend in El Paso County, Texas.

According to Rev. Rodriguez, who has advised President Trump, as well as Presidents Barack Obama and George W. Bush on immigration reform, CBP agents, many of whom are themselves Hispanic, told him:

“Pastor Sam, what they’re saying about us is completely false. We care about these kids and have a passion for our calling.”

Then Rev. Rodriguez placed blame for whatever ordeal the illegal border crossers have been forced to endure squarely at the feet of Rep. Ocasio-Cortez and the rest of the posturing do-nothing Congress:

Despite her naive act, Alexandria Ocasio Cortez is just the latest lying Democrat that will say whatever she needs to say to advance her agenda.

We’ve seen this before America.

Don’t fall for her act.