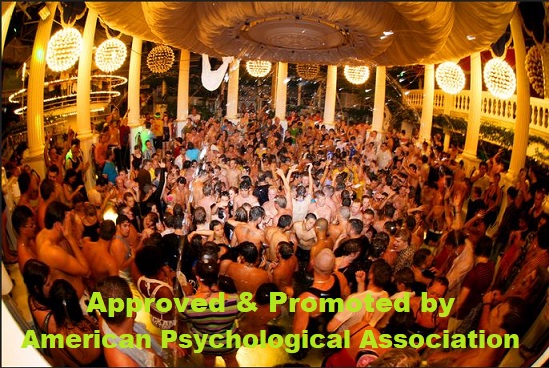 Psychology is already at best a soft, if not outright pseudo, science.

Now the American Psychological Association (APA) is venturing into the non-scientific, non-empirical domain of morality by giving their approval to adulterers, swingers, and orgiasts.

In 1985, “a group of pioneering LGB psychologists and their allies” at the APA founded Division 44, the Society for the Psychological Study of Lesbian and Gay Issues, for an explicitly nonscientific, political reason. Div. 44’s mission states:

Div. 44 (SPSOGD) is committed to advancing social justice in all its activities. The Society celebrates the diversity of lesbian, gay, bisexual, transgender and gender nonconforming and queer people….

Div. 44 has over 1,500 members, and “represents” all 50 states, the District of Columbia, and 11 foreign countries “on every inhabited continent.”

The latest Div. 44 initiative is the Consensual Non-Monogramy Task Force, the goal of which is to “promote awareness and inclusivity about consensual non-monogamy and diverse expressions of intimate relationships. These include but are not limited to: people who practice polyamory, open relationships, swinging, relationship anarchy and other types of ethical, non-monogamous relationships.”

The goal of the task force is to “generate” (pseudo-scientific) research and disseminate propaganda — “advocate for the inclusion of consensual non-monogamous relationships in the following four areas”: