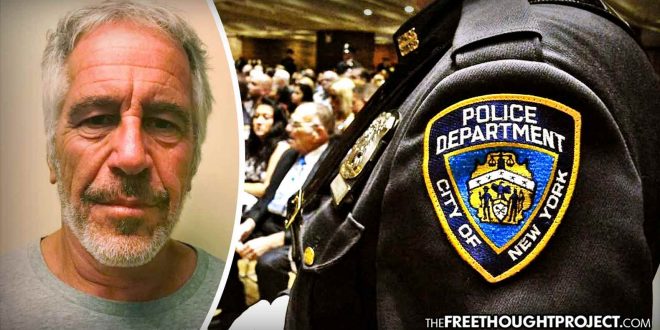 As TFTP reported this week, billionaire hedge fund manager and convicted pedophile Jeffrey Epstein was arrested on Saturday and made his first court appearance Monday for sex trafficking minors. While this news was certainly welcoming to those who have been following the case, it exposed a rather troubling practice by the NYPD when it comes to tracking convicted billionaire child rapists.

After Epstein was convicted as a child rapist in 2011, he was ordered by the court — as part of his sentencing — to check in with police as a registered sex offender every 90 days. Over the course of eight years since he was convicted, this amounts to 34 check-ins — exactly zero of which Epstein made.

After being labeled a worst-of-the-worst, Level 3 sex offender in 2011, Epstein should have reported in person to verify his address 34 times before he was arrested Saturday on federal child sex-trafficking charges.

Violating requirements of the state’s 1996 Sex Offender Registration Act — including checking in with law enforcement — is a felony punishable by up to four years in prison for a first offense.

Subsequent violations carry a sentence of up to seven years each.

But the NYPD hasn’t required the billionaire financier — who owns a $77 million Upper East Side townhouse — to check in since he registered as a sex offender in New York over the controversial 2008 plea bargain he struck in Florida amid allegations he sexually abused scores of underage girls in his Palm Beach mansion.

Several current and former high-ranking NYPD officials were shocked to learn from The Post that the department had given Epstein a pass on his periodic check-ins, with one saying, “It makes no sense.”

However, that is exactly what appears to have been happening.

Not only was this convicted pedophile in violation of his sentencing, but the NYPD is standing by their decision which allowed the convicted child rapist the special privilege.

According to the Post, the NYPD claims that Epstein wasn’t required to check in — despite the court order — because he claims primary residence on his private island in the US Virgin Islands.

However, as the Post points out, state Supreme Court Justice Ruth Pickholz considered and rejected that very argument by defense lawyer Sandra Musumeci during the Jan. 18, 2011, hearing.

“I am sorry he may have to come here every 90 days,” she said, according to an official transcript. “He can give up his New York home if he does not want to come every 90 days.”

But he never gave up that home and he never once checked in.

The check-ins for convicted sex offenders are mandatory as part of the state’s program to track them. They must be in person not only to verify their address but so police can take another photo and post it to the database. This never happened.

While this is certainly shocking, it is par for the course in the special privilege granted to this monster by those in power.

As TFTP has reported, Epstein is a convicted child molester and sexually abused no less than 40 underage girls. Despite this fact, Alexander Acosta protected him while serving as a U.S. Attorney in Florida.

Instead of going to prison for life, as he should’ve considering the evidence against him, Epstein only got 13 months and was allowed to stay in the Palm Beach County Jail in his own private cell where he was allowed to leave the prison six days a week for “work release.”

As a report in the Miami Herald notes:

Facing a 53-page federal indictment, Epstein could have ended up in federal prison for the rest of his life.

But on the morning of the breakfast meeting, a deal was struck — an extraordinary plea agreement that would conceal the full extent of Epstein’s crimes and the number of people involved.

Not only would Epstein serve just 13 months in the county jail, but the deal — called a non-prosecution agreement — essentially shut down an ongoing FBI probe into whether there were more victims and other powerful people who took part in Epstein’s sex crimes, according to a Miami Herald examination of thousands of emails, court documents and FBI records.

The pact required Epstein to plead guilty to two prostitution charges in state court. Epstein and four of his accomplices named in the agreement received immunity from all federal criminal charges. But even more unusual, the deal included wording that granted immunity to “any potential co-conspirators’’ who were also involved in Epstein’s crimes. These accomplices or participants were not identified in the agreement, leaving it open to interpretation whether it possibly referred to other influential people who were having sex with underage girls at Epstein’s various homes or on his plane.

These are undisputed facts — yet Trump still appointed Acosta to Secretary of Labor.

During his appointment hearing in 2017, Acosta even defended the way he handled the Epstein case.

It appears that not only are high level government officials bending over backwards to protect a billionaire child rapist, but the NYPD is too. This is the current state of affairs in the land of the free. As hundreds of thousands rot in in prisons across the country for victimless crimes, your government goes out of its way to protect well-connected child rapists.