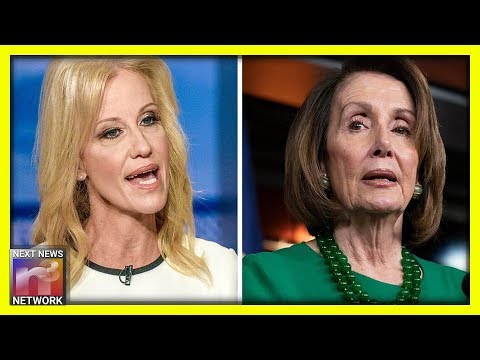 For those who have not heard, AOC recently called Nancy Pelosi a “racist” and the fight is now on.

Next News Network is reporting that Kellyanne Conway has put herself in the mix and things are getting extremely interesting.

“Major meow moment, a brushing back in a huge catfight. Really ridiculing them,” said Conway, accusing the four Democrats of “preening around” at the detention centers, but then rejecting a bill to improve the situation.

“You know who suffered? The people suffered, our brave men and women at Border Protection, the kids who these Democrats pretend they care so much about.”

Pelosi blasted the White House Monday for keeping up efforts to include a citizenship question on the 2020 census.

During Monday’s press conference on election security, Pelosi called President Trump’s battle over the census “disgraceful,” pointing to his Supreme Court setback that rejected the administration’s argument for having a question about citizenship in the census.

Of course, President Trump dropped his own bombshell on Thursday by signing an executive order to counter the Democrats:

Via Executive Order on Thursday, President Trump made a bold move to start setting things right.

Here’s all the details via Next News Network:

Trump confirmed an earlier report claiming he would take executive action that instructs the Commerce Department to acquire data on citizenship through other means.

“Today I will be issuing an executive order to put this very plan into effect immediately,” Trump said. “I am hereby ordering every department and agency in the federal government to provide the Department of Commerce with all requested records regarding the number of citizens and non-citizens in our country.”

“The Census Bureau projected that using previously available records, I could determine citizenship for 90% of our population or more,” Trump said. “We’re aiming to count everyone.”

“We will leave no stone unturned,” he added.

While the Democrats continue to squabble with each other, your President is playing 3-D Chess.

It appears he has sent out his “lady” bishop to start slicing through and distracting the opposition, while he continues to Make America Great Again.

Her jumping into the mix with the Dems allowed our President to finalize the executive order that was signed Thursday.

This is how this administration plays 3-D Chess.

Thank You Kellyanne and Thank You Mr. President!