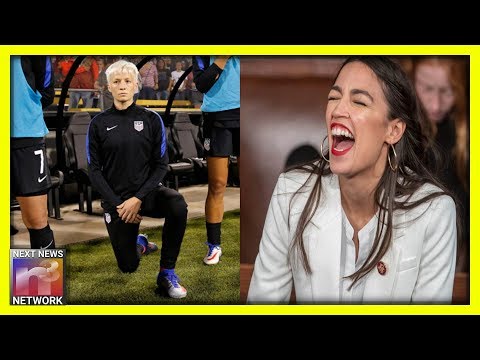 Has there ever been an American victory in the International sports arena that has been less celebrated than the recent Women’s World Cup victory?

Megan Rapinoe made sure that millions of Americans simply tuned out by bringing politics into sports.

So many of us who would have been cheering wildly simply lost interest.

Unfortunately, she is still running her mouth and has taken things to new lows.

Josh Bernstein has the latest:

In an interview with CNN’s Anderson Cooper on Tuesday night, U.S. Women’s National Team (USWNT) co-captain Megan Rapinoe said that she felt an “immense sense of pride,” when protesting during the national anthem at the World Cup.

After saying that protesting the flag gave her some personal difficulties, Cooper then asked Rapinoe to expand on that thought. The USWNT star went on to explain how she overcame those difficulties by focusing on the “pride” and “responsibility” she felt in performing the protests.

Rapinoe, after saying she'll never visit Trump, gives a "shoutout" to @AOC and says she'll go to D.C. to have a "substantive conversation" with "anyone" … who "believes the same things we believe in." pic.twitter.com/vfhvlybEGT

Rapinoe then went on to double down on her stance that she will never visit the White House, and promised to have “substantive conversation” with the people who believe in the same things she does. Cooper did not follow up by asking why a conversation would be needed between people who already agree,

Megan Rapinoe previously made it clear that she felt you can not win a championship without gays, in women’s soccer:

Fresh from a week in which she was involved in a row with President Donald Trump over her comments that she wouldn’t “go to the f*cking White House” if the US won the World Cup, Rapinoe scored once in each half to see off France 2-1 in Paris and book a semifinal date with England.

After the game, Rapinoe, who is gay, was asked what the result meant to her coming as it did during Pride month.

“You can’t win a championship without gays on your team – it’s never been done before, ever. That’s science, right there,” the 33-year-old said.

“I’m motivated by people who like me, who are fighting for the same things. I take more energy from that than from trying to prove anyone wrong. That’s draining on yourself.

“But for me, to be gay and fabulous, during Pride month at the World Cup, is nice,” she added.

She also glady brought politics into sports by saying “F*ck” Trump and gladly accepting an Ocasio-Cortez invitation for a visit:

United States Women’s National Team soccer star Meagan Rapinoe is doing everything in her power to parlay her 10 minutes of fame into something bigger.

Rapinoe this week declined the invitation of President Donald Trump to visit the White House before he ever gave it.

Being the bigger man, the president decided to invite the team anyway, whether they win or are defeated in the World Cup.

But she has decided to accept one invitation, from New York Rep. Alexandria Ocasio-Cortez to tour the House of Representatives.

“It may not be the White House, but we’d be happy to welcome @mPinoe & the entire #USWMNT for a tour of the House of Representatives anytime they’d like,” Ocasio-Cortez

It may not be the White House, but we’d be happy to welcome @mPinoe & the entire #USWMNT for a tour of the House of Representatives anytime they’d like. 🇺🇸 https://t.co/ccgqE8vCds

As a huge soccer fan who happened to vote for President Trump, I have a message for Megan Rapinoe.

You ruined this victory for me, and many other Americans, because you chose not to win with class, but to run your mouth and bring politics into the world of sports.

Sports is an escape for many of us.

We don’t want to hear about politics as we watch, we just want to cheer you as you score goals.

You embarrassed Team USA and your country.

Shame on you Megan Rapinoe.

You are in your mid-30s and you act like a stupid teen.

Show some respect to your country and to those who would ultimately cheer for you (if you would just shut your damn mouth).

I won’t be paying much attention to women’s soccer until you are gone.

Too bad you had to cast this huge shadow over your team and the entire event.

Congrats Team USA for a fine victory that probably would have happened with or without the proud but obnoxious lesbian that thinks the world is hanging on her every word.

Honestly, you are not that newsworthy and, with my publications,  your antics only get reported on slow news days.

Nothing else is acceptable in the world of sports.

Megan Rapinoe, you won a world cup but you are a loser in so many other ways that are much more important.