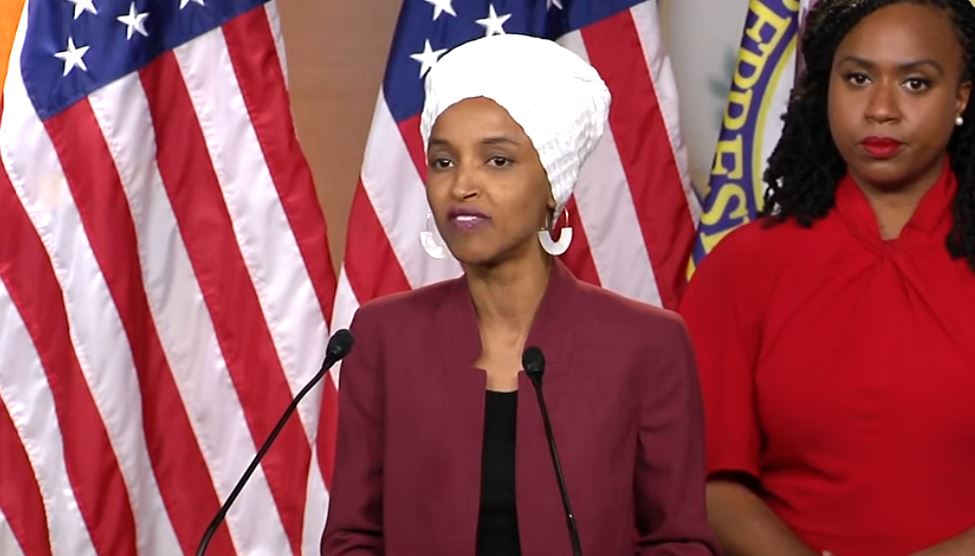 During a press conference Monday in which the so-called “squad” of four radical progressive Democrats whined about tweets President Trump issued over the weekend, Ilhan Omar, the treasonous, America-hating, terrorist-loving anti-Semitic Democrat from Minnesota, uttered a number of lies regarding President Trump’s election, the border and more.

For example, Omar stated Trump is “openly violating” his oath of office, but did not say how.  She also falsely claimed that Trump colluded with a foreign power to win the 2016 election.

Apparently, she never heard of the Mueller report, which says just the opposite.

She accused Trump of engaging in human rights abuses on the border, and repeated AOC’s lies that those in the camps are forced to drink from toilets.

Omar also claimed that Trump has been “credibly accused” of committing “multiple crimes,” including, she said, “colluding with foreign governments to interfere with our election,” despite the findings of the Mueller report.

She also accused Trump of overseeing “the most corrupt administration” in U.S. history, but offered no evidence.  She additionally accused Trump of letting “millions” die from lack of health care.

Here’s video of the entire press conference, courtesy of Fox News.  Omar’s comments can be heard at the 24:41 minute mark:

“If weak politicians want to say — and the Democrats in this case — if they want to gear their wagons around these four people, I think they’re going to have a very tough election, because I don’t think the people of the United States will stand for it,” Trump said.

“These are people that hate our country,” he added. “They hate it — I think — with a passion. Now, it’s possible I’m wrong. The voter will decide.”

This is the video of Ilhan Omar that Trump kept referencing while speaking to the press todaypic.twitter.com/tFv2rP7UOy