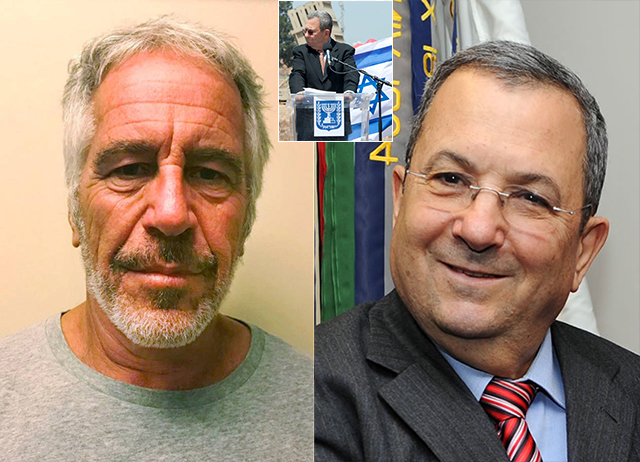 The former Prime Minister of Israel and head of Israeli Military Intelligence, Ehud Barak, was photographed “hiding his face” while entering Jeffrey Epstein’s mansion on the same day that a “bevy of young women” were seen going into the same home, the Daily Mail reports.

The ever-expanding probe into Jeffrey Epstein’s pedophile ring is now threatening to derail the Israeli election as DailyMail.com has obtained exclusive pictures of one of Benjamin Netanyahu’s main challengers hiding his face as he entered the convicted sex offender’s Manhattan townhouse.

A bevy of young women were also seen going into the multi-millionaire’s lavish seven-story home on the same day that Ehud Barak was snapped.

[…] The photographs were taken in January 2016 after Epstein, now 66, had returned to New York after an overseas trip.

Within hours at least four young women had gone to the home that the federal government wants to seize as part of its new case against the financier.

At the time, the identity of the man seen with his own security detail going to Epstein’s mansion on East 71st Street was unclear. Now DailyMail.com has confirmed it was Barak.

Separately, he admitted to the Daily Beast, that it was him but said his visit was innocent. ‘I was there, for lunch or chat, nothing else. So what?’

‘I never attended a party with him. I never met Epstein in the company of women or young girls.’

Barak also has admitted he traveled to Epstein’s private Island, which is referred to by locals as “pedophile island.”

Barak said he went to Epstein’s island AFTER it was already known that Epstein is a sex offender, but that he never saw any girls with Epstein. He still won’t say what Wexner paid him to do. https://t.co/64ncsMSb5Y

“The man who introduced me to Epstein about 17 years ago was Shimon Peres,” Barak said, uncertain if the event took place in New York or Washington, but recalling it was at an event where “there were many famous and important people, including, if I recall, both Clintons and hundreds of others.”

Since then, Barak says, he has met Epstein “more than 10 times and much less than a hundred times, but I can’t tell you exactly how many. I don’t keep count. Over the years, I’ve seen him on occasion.”

“I never attended a party with him,” Barak told The Daily Beast. “I never met Epstein in the company of women or young girls.”

Epstein also reportedly “entered a partnership worth millions” with Barak in 2015. In 2017, Ronan Farrow reported that Ehud Barak referred Hollywood mogul Harvey Weinstein to a team ex-Mossad agents who allegedly used fake identities to spy on and track down his accusers as well as suppress news stories about his sexual improprieties.

In 2015, D.A Cyrus Vance dropped model Ambra Battilana Gutierrez’s case against Harvey Weinstein even though police sources reportedly said, “We had the evidence.”

It came out Tuesday in court that Epstein had a foreign passport from Austria under a different name and his lawyers tried to justify it by saying that as “an affluent member of the Jewish faith” he needed it “for personal protection in the event of travel to dangerous areas” in the Middle East.

In a new filing, Epstein’s attorneys say the foreign passport recovered from his home was Austrian & that Epstein, “an affluent member of the Jewish faith,” intended to use it in case he was hijacked. They don’t explain why, according to prosecutors, it wasn’t issued in his name. pic.twitter.com/y5SzBrt7nu

Vicky Ward reported last week that Acosta told the Trump transition team that “I was told Epstein ‘belonged to intelligence’ and to leave it alone.”

Epstein allegedly wired his houses up with video cameras and microphones to surreptitiously record his high powered clients for possible blackmail purposes.

Ann Coulter said last week that she believes Epstein was running an obvious “blackmailing” operation and he may have a “state sponsor.”

I wonder who that “state sponsor” may be?

[Article updated to include even more evidence.]