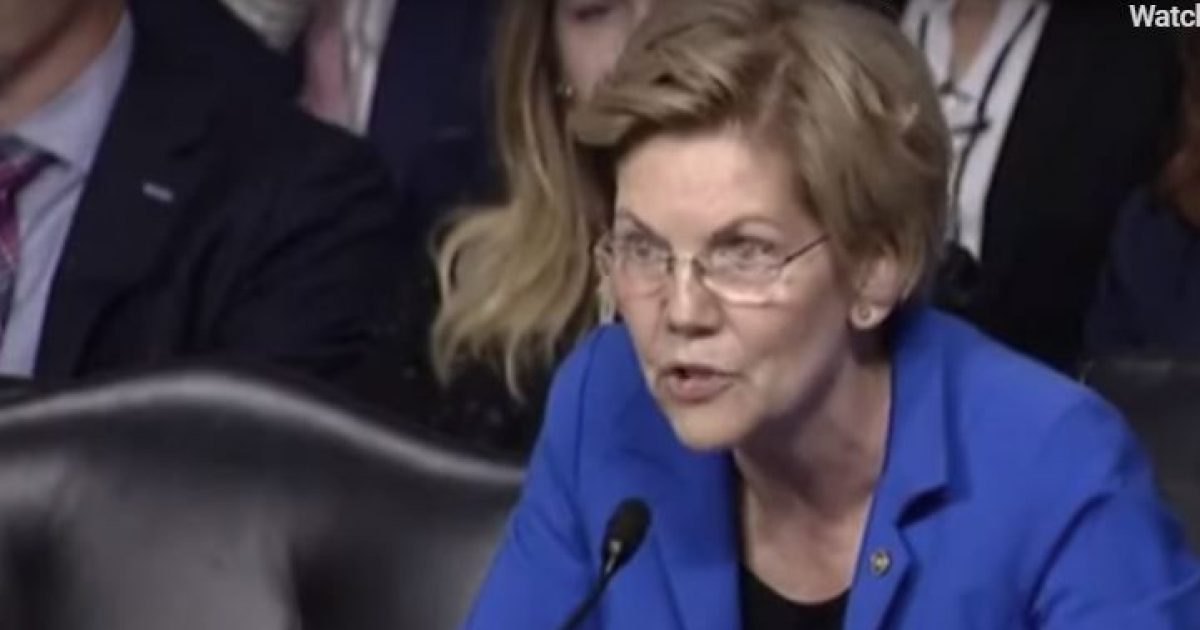 Massachusetts Sen. Elizabeth Warren made a complete fool of herself during Tuesday’s hearing before the Senate Armed Services Committee.

The hearing was being held for President Donald Trump’s nominee for Secretary of Defense, Mark Esper.

Esper, for the most part sailed through the hearing garnering support from both Democrats and Republicans.

But he was grilled by the 2020 Democratic presidential candidate, Sen. Elizabeth Warren, over his ties to the defense contractor Raytheon, where he previously worked as a lobbyist, CNN reports.

Warren was one of the only lawmakers on the committee who raised serious objections to Esper’s confirmation during a heated exchange in which the Army secretary refused to commit to recusing himself from matters involving his former employer, Raytheon.
As it stands Esper is not required to recuse himself after November, in accordance with his ethics agreement, but Warren wanted him to commit beyond then. Esper will still have to adhere to standard to ethics rules.

Watch Warren flip out in the video- she’s completely insane:

Carmine Sabia at The Federalist Papers has more including partial transcript:

“Will you commit not to work for or get paid by any defense contractor for at least four years after your government service?” she asked.

“The American people deserve to know that you’re making decisions in our country’s best security interests, not in your own financial interests,” she said.

“You can’t make those commitments to this committee. That means you should not be confirmed as Secretary of Defense,” she said.

The committee chairman decided that her harassment of the nominee meant that Esper deserved time to respond, and respond he did.

“At the age of 18 I went to West Point, and I swore an oath to defend this Constitution, and I embraced a motto called duty and honor and country.

“I’ve stepped down from jobs that paid me well more than what I was working anywhere else. And each time it was to serve the public good and to serve the young men and women of our armed services,” he said.

“So, no, I disagree — I think the presumption is that anybody that comes from the business or the corporate world is corrupt,” he said.

That is when Sen. Warren was told that she had gone beyond the time allotted to her to question the nominee and she had a tantrum.

“Okay, so I’m asking the question. No, this is not right, Mr. Chairman. He does not — I didn’t ask a question at the end,” she said.

“I have not gone over. He has gone over. And he is not willing to make a commitment that he will not engage in conflicts of interest with that company for which he was a lobbyist,” she said. “This is outrageous.”

Republican Sen. Tom Cotton defended Esper’s ties to Raytheon, providing the opportunity for Esper to state he had fully divested his stake in the company and noting that several previous nominees for the secretary of defense role had also worked for defense contractors prior to their confirmation, CNN reported.

Florida Republican Rick Scott took a harder line in his criticism of Warren, accusing her of “needing a moment for her presidential campaign.”
“I’m very disappointed that Sen. Warren would demonize you after you decades of service simply because you served in the private sector,” he said.

“There’s a lot of us who have been in the private sector and that doesn’t take anything away from our ability to do our job. I guess she just needed a moment for her presidential campaign,” he said.