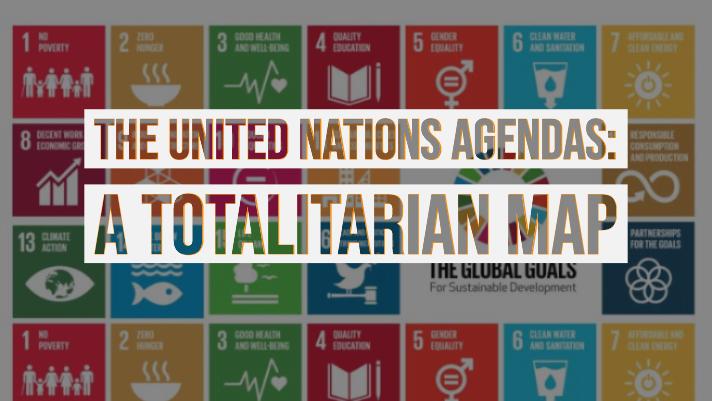 The biggest mess that the united States has gotten into comes through the ties we’ve had with the anti-American, anti-Christian United Nations.  Trillions of dollars have been spent at the expense of Americans to fund the organization that is doing everything it can to undermine American sovereignty, dumb down our posterity and control the entire world.  Among those things is Agenda 21 and Agenda 2030, along with several other agenda the UN has proposed.  Understand that though these agendas were expressed in treaties, the united States never ratified those treaties yet, they are being implemented in America today.

With that said, there is an op-ed out by Rosanne Lindsay at Activist Post that connects the dots for you if you have not connected them yourself.

The following is her article:

If you connected all the dots to the various United Nations (U.N.) Agendas, would you create a map of mass regionalization and an eventual Totalitarian State?

Let us count the ways…

According to the author of Behind the Green Mask, Rosa Koire says that “U.N. Agenda 21 is an agenda for the 21st century. It  is an inventory and control plan; inventory of all land, water, all minerals, all plants, all animals, all construction, all means of production, all food, all energy, all information, and all human beings in the world.” It’s about moving populations into concentrated city centers and clearing them out of rural areas under “Smart Growth.” Under the guise of “Sustainability,” Agenda 21 is the hijacking of the environmental movement.

Agenda 21 is top-down hierarchy, moving away from current government structure based on elected positions in Federal-State-County-City, to a global-regional-neighborhood structure without elections. Currently hundreds of millions of federal dollars are going to cities to create regional plans to give over control of land, and land use, to corporations. For instance, the federal government gave the Telecom Industry new powers to sidestep over the public right-of-way for the roll out of 5G technology by removing regulatory barriers that might prevent infrastructure.

In an order last year by the Federal Communications Commission (FCC), If Verizon wants to build a 5G network in a city, the local government is limited in how much it can charge in application fees, and is pushed to approve permits quickly.These rules also mean cities are limited in how they can respond to residents who are upset about equipment going up near them. Many local leaders have spoken out against the FCC’s rules, dozens of whom have banded together to file a lawsuit to overturn it, which has advanced to the Tenth Circuit.
“[T]he FCC is forcing cities to race to the courthouse to defend the most basic of local government rights—the authority to manage and seek fair compensation from private users that seek to employ public assets,” Tom Cochran, the CEO and executive director of the U.S. Conference of Mayors, said in a statement.

U.N. Sustainable Development Agenda seek to redistribute wealth away from the middle class to lower the standard of living and, at the same time, reduce the population. The 17 sustainable development goals include goal #2: End hunger through the control of all food production. See my article on how the U.N. seeks to feed the world with crickets.

Sustainability is fomented through crisis, artificial scarcity, and forced conservation known as rationing. It is the excuse to partner science with religion to combat Climate Change, as the Pope described in his June 2015 encyclical.  Climate Change legislationin California is tied directly to international influences of U.N. Agendas 21 and 2030 for Sustainable Development. Yet, impacts from the government’s cloud seeding and geo-engineering programs continue unabated. Smart Cities will design growth patterns, redesign cities, and herd people into stackable housing through behavior modification, zoning and land use controls, and tax on toll roads.

The 5G rollout is necessary for “The Internet of Things” in a future of A.I. where techie geeks are thinking up new ways to make you, and the things around you, smarter. For those that missed it, there is a new Church of The A.I. god. The latest god-bot religion is founded by former Google executive Anthony Levandowski, and comes with a website called Wayofthefuture.church. As if to drive this message home, Google’s director of engineering, Ray Kurzweil, believes humans will be robot hybrids by 2030. This reflects a Transhumanist Agenda.

Humans will never be the same again, partly because for years, scientists have been using CRISPR gene-editing technologyto alter DNA through vaccines and drug therapies. They hope to be able to bring extinct species back from the dead as one of their marvel feats.

The U.N. Agendas pave the way for a seamless transition from the individual to the group mindset as part of the A.I. Agenda. There will be no need for voting since there is no need for the individual voter. A Totalitarian, Transhumanist, state is being developed worldwide under a few select corporations: a fascist Corpratocracy. Agenda 21 and 2030 represents a world without borders to allow the free movement of workers, goods and services, all while reducing wages.  The politically correct name for this movement?

However, not your social equity, but equity for corporations to exploit, manage, surveil and control individuals in tightly packed dense “stack and pack” cities.  Control is a vital part of the plan.

What is at stake?

Individuality and individual sovereignty. The most important private property is your body.  Lost identity falls under the mask of “unity” rhetoric. Unity, under the guise of uniformity and conformity, looks like a genderless society. Genderless means males and females no longer exist. When males and females no longer exist, there is no procreation of the human species. The agenda is depicted as U.N. Goal #5 Gender Equality. The U.N. message is this:  Gender equality is not only a fundamental human right, but a necessary foundation for a peaceful, prosperous and sustainable world.

The U.N. is implementing “new legal frameworks” to grant “new rights” to groups, to end gender-based discrimination in every country. Government granted rights are merely privileges. What the U.N giveth, it can taketh away. What does the U.N goal look like in reality?  The answer is disclosed in the news headlines, which are codes that set the stage for the outcome. The UN counts on you not seeing the Big Picture to connect the dots to the loss of your identity from non-gender, inter-sex birth certificates to driver’s licenses to tax-subsidized surgeries for those who want to change their gender.

While the UN claims that Chemtrails are imaginary, they have been tracing weather modification projects worldwide between the years 1952 and 1999 as recorded by the United Nations World Meteorological Organization. Cloudseeding enhances and targets precipitation, and has been going on since the 1800s.  Need a deeper snowpack for ski resorts? Click on Utah and find out that they can increase the snowpack. Have a fire to put out? Call the companies that will cause it to rain and charge you for it! China spent hundreds of millions of dollars to control the weather during the Beijing Olympics. But don’t expect them to take the blame for causing floods.

The Weather Modification map includes data on the apparatus involved, agents applied and the techniques used in each event. It also includes both positive and negative results of some of the completed projects, funding sources such as government agencies and private companies. It even includes expert opinions and law cases on the topic in order for you to get a complete picture of the benefits and drawbacks of such programs.

Rosa Koire, in her video interview UN Agenda 2030 Exposed, suggests that there is an opportunity now to:

As this is happening worldwide, most know nothing about it since the mainstream press is owned by five corporations.

You are not going to get this information from the mainstream press. So you need to be your own press. You need to educate yourself. You need to get out there and educate your neighbor, your community, your real community. You need to help your children understand that they are being indoctrinated from pre-kindergarten to post graduate school…

All of us have a responsibility to ourselves and to others. This is true community, to work for personal freedom. And always remember even if we do work as a group, we’re all individuals in those groups and we answer only to ourselves.  This is essential. As free human beings are free and we need to continue to be free.. – Rosa Koire

Rosanne Lindsay is a writer, blogger, and Naturopathic healer. She is the author of two books, The Nature of Healing: Heal the Body, Heal the Planet, and her story of thyroid disease reversal: Free Your Voice, Heal Your Thyroid, Reverse Thyroid Disease Naturally. Find her at Nature of Healing on Facebook. Consult with her (Skype or Zoom consults available) at natureofhealing.org. Subscribe to her blog at https://www.natureofhealing.org/blog/.

MINDSPACE: The “Not For Government Policy” Document That Government Is Using Against The People
June 18th, 2021 Sons of Liberty Media

Hunter’s laptop reveals his use of another racial slur — this time against Asians
June 18th, 2021 Liberty Unyielding

WATCH: Blatant Liar Stacey Abrams Says ‘No One Ever Objected To Voter I.D.’ — Here She Is Doing EXACTLY That
June 18th, 2021 Clash Daily