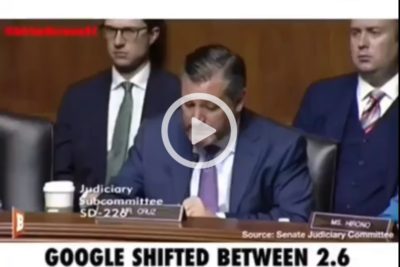 Not so strangely this video is hard to find. But you must watch it, share it, email it. And come to my talk on August 15th in NYC, it’s time to war council.

The exchange between Senator Ted Cruz and Google expert Dr. Robert Epstein should shake every American. The Left will not be able to defeat Trump on the issues, so they will surely cheat. And big-tech giants make cheating easy through censorship and search engine manipulation. In the case of Google, bias search results and bias search suggestions would be incredibly damaging to President Trump in 2020.

President Trump must address big-tech cheating before the 2020 presidential election.

Professor Robert Epstein told Senator Ted Cruz (R-TX) that Google is manipulating voters “on a massive scale,” using tools that it has at its disposal exclusively, and that “no one can counteract them.” Epstein warned the Senator of big tech election meddling that he called “invisible,” “subliminal,” and more powerful than anything he’s seen in 40 years of behavioral sciences.

Epstein — who said that he personally supported and voted for Hillary Clinton in 2016 — testified before the Senate Judiciary Committee on Tuesday, where he told Sen. Cruz that Google election meddling gave Hillary Clinton at least 2.6 million additional votes in the 2016 election and said that figure is even way too low.

“The 2.6 million is a rock bottom minimum,” said Epstein, “The range is between 2.6 and 10.4 million votes, depending on how aggressively they use the techniques that I’ve been studying now for six and a half years — such as the search engine manipulation effect, the search suggestion effect, the answer bot effect, and a number of others.”

“They control these and no one can counteract them,” added the professor, “These are not competitive, these are tools that they have at their disposal exclusively.”

“I believe in democracy, I believe in a free and fair election more than I have any kind of allegiance to a candidate or a party,” affirmed Epstein on Tuesday. “In 2020 — if all these companies are supporting the same candidate — there are 15 million votes on the line that can be shifted without people’s knowledge, and without leaving a paper trail for authorities to trace.”

Epstein elaborated on his assertion by describing an example involving Facebook.

If [in 2016]Mark Zuckerberg, for example, had chosen to send out a ‘Go Vote’ reminder, say, just to Democrats — and no one would have known if he had done this — that would have given that day an additional — at least 450,000 votes to Democrats, and we know this without doubt, because of Facebook’s own published data — they did an experiment that they can tell anyone about during the 2010 election — they published it in 2012, it had 60 million Facebook users involved.

They sent out a ‘Go Vote’ reminder, and they got something like 360,000 more people to get off their sofas and go vote, who otherwise would have stayed home. The point is, I don’t think that Mr. Zuckerberg sent out that reminder in 2016, I think he was overconfident, I think Google was overconfident, all these companies were. I don’t think he sent that out — without monitoring systems in place, we’ll never know what these companies are doing — but the point is, in 2018, I’m sure they were more aggressive, we have lots of data to support that.

“What you are testifying to is that a handful of Silicon Valley billionaires and giant corporations are able to spend millions of dollars, if not billions of dollars collectively, massively influencing the results of elections?” asked Cruz.

“Senator, with respect, I must correct you,” replied Epstein, “If Mark Zuckerberg chooses to send out a ‘Go Vote’ reminder just to democrats on Election Day, that doesn’t cost him a dime.” (Breitbart)

Donald Trump’s claim that Google has been manipulating search results has been debated hotly in the media.  Trump has recently reignited his suspicions about Google.