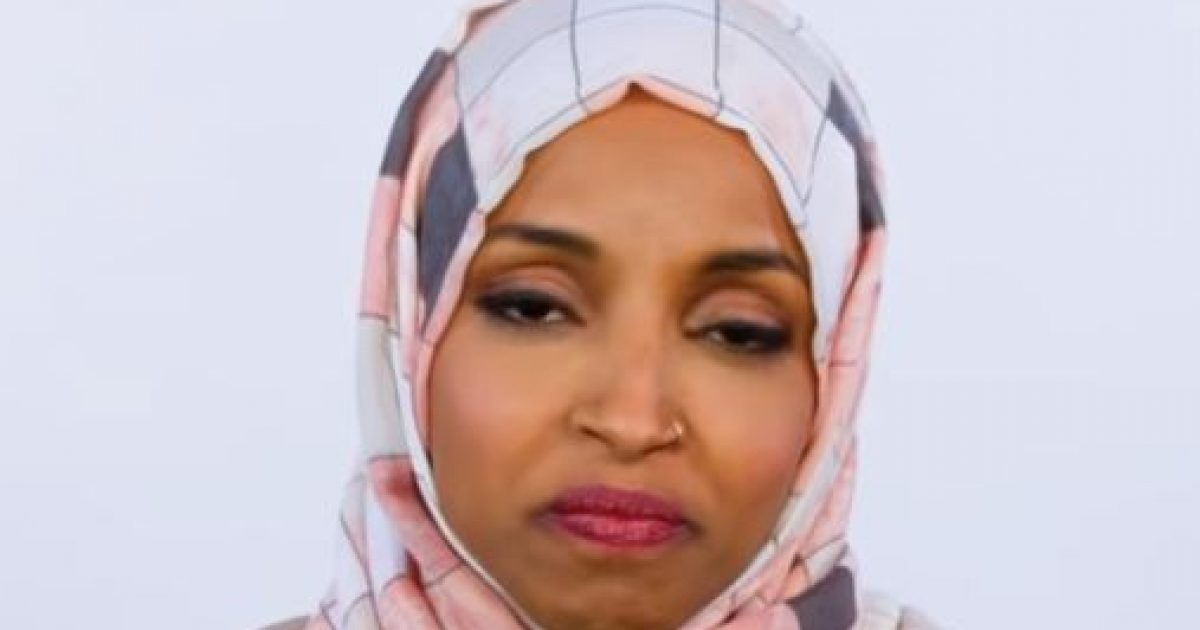 David Steinberg released his latest report on controversial Rep. Ilhan Omar on Thursday, it can be read in its entirety at PowerLineblog.com.

Jim Hoft’s, The Gateway Pundit suggests that: According to Steinberg there is credible evident that Ilhan Omar and her family changed their name to illegally enter the United States back in 1995.

There are also allegations that suggests that Ilhan Omar, from that time forward, through her time as an adult, has continued to break United States law. Steinberg believes Rep. Omar committed perjury at least eight times, beginning as early as 2009. If proven in a court of law, the charges against the Muslim Democrat Rep could mean up to 40 years of prison time and/or even forced deportation.

If Steinberg’s research and allegations prove to be true, it would sure seem that Ilhan Omar has no regard for US law and yet there she is, “serving” in Congress representing Minnesota, voting on what becomes the law of the land in the greatest nation on Earth and is even a sitting member on the House Foreign Affairs Committee.

This story is developing quickly and David Steinberg has reported today on Ilhan’s alleged criminal activity.

Again, if the allegations are proven, it would sure seem that the Minnesotan Rep has no qualms about lying on federal documents.  I’m not an attorney and I could be wrong, but that sounds like the “F” word to me … FRAUD.

Powerline.com Reported: Please read the verified evidence below — and read it alongside the three years of verified evidence published by Scott Johnson, Preya Samsundar, and myself (our work is linked here). The answers to those questions about 2009 appear to give probable cause to investigate Omar for eight instances of perjury, immigration fraud, marriage fraud, up to eight years of state and federal tax fraud, two years of federal student loan fraud, and even bigamy.

To be clear: The facts describe perhaps the most extensive spree of illegal misconduct committed by a House member in American history.

David Steinberg wraps up his article with the following list of possible crimes Ilhan Omar may have committed:

Yet here we have:

Photos which can be examined to rule out digital manipulation

The 2019 Minnesota Campaign Finance and Public Disclosure Board investigation, which found Omar filed illegal joint tax returns with a man who was not her husband in at least 2014 and 2015

Three years’ of evidence published across many articles — none of which has been shown to be incorrect, or have even been challenged with contradictory evidence from Rep. Omar or any other source

Perjury evidence that stands on its own — regardless of whom she married:

Further, Preya Samsundar did contact him, published how she managed to contact him, and published his email admitting to being photographed with Omar in London in 2015. To be clear: Omar was legally married to an “Ahmed Nur Said Elmi” at the time she was photographed next to a man who admits his name is Ahmed Nur Said Elmi, and that he is in the photo.

Samsundar published all of this information on how to contact Ahmed Nur Said Elmi a few months before Omar swore to that nine-question court document.

Rep. Omar has refused all inquiries from her constituents, elected officials, and media outlets to provide any specific evidence contradicting even a single allegation suggested by three years of now-public information.

In fact, Omar has responded by making information less available:

When the accounts returned, a large amount of potentially incriminating evidence had verifiably been deleted.

I found and published at least ten additional “before and after” instances of evidence still being deleted in 2018.

Omar has released carefully worded, Clintonian statements that denigrate those seeking answers from her as racists. Yet she has repeatedly refused to answer questions or issue anything other than public relations statements.

I have a large amount of information that we have not published for reasons including the protection of sources.

Sources have expressed fear regarding published video and photo evidence confirming threats from Omar’s campaign team. These sources have shared other evidence of threats. I have contacted the federal authorities to share this and other unpublished information. Providing knowingly false information to the DOJ is a serious crime.

I believe Scott Johnson, Preya Samsundar, and me, with our three years of articles, columns and posts, have provided more than enough evidence to give law enforcement authorities probable cause to open an investigation. Now would be the chance for law enforcement, and especially for Rep. Ilhan Omar’s House colleagues, to make a sincere stand against corruption and for the uniform application of the law.

The Gateway Pundit Reported: Once Again… It should be noted that by American law — When a marriage fraud is discovered, not only might the immigrant face severe immigration consequences, but both members of the marrying couple may face criminal penalties… An immigrant who is found to have committed marriage fraud would likely be removed from the United States (deported).