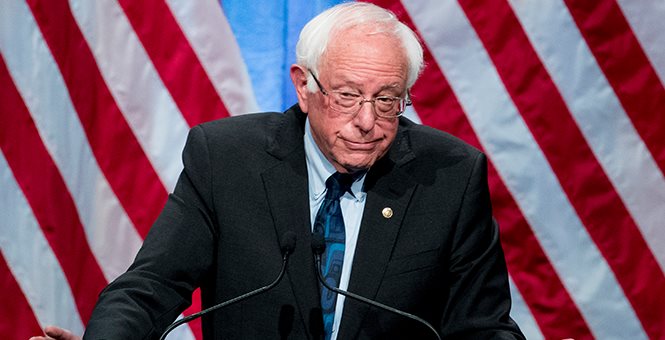 Presidential candidate Sen. Bernie Sanders (I-VT) is making it too easy for his critics. The democratic socialist has long lobbied for a minimum wage hike, but apparently, in his own life, he is a “do what I say, not what I do” sort of guy.

According to the Washington Post, the compensation and treatment Sanders’s unionized employees are receiving “does not meet the standards Sanders espouses in his rhetoric.”

This is my favorite story of the day.

Bernie Sanders' campaign staff has unionized and is demanding a $15 per hour "living wage" and 100%-paid health care for those earning under $60k. The campaign leadership has thus far resisted. https://t.co/mui0DLefis

It all played right into former White House Press Secretary Ari Fleischer’s hands. He added a few other areas of Bernie’s hypocrisy, including his ambitious Medicare for All plan. That idea, as Politico reported, died in Sanders’s home state of Vermont.

“If cobalt blue Vermont couldn’t find a way to make single-payer happen, then it’s very unlikely that any other state will,” said Jack Mozloom, spokesman for the National Federation of Independent Business.

“There will never be a good time for a massive tax increase on employers and consumers in Vermont, so they should abandon that silly idea now and get serious,” Mozloom added.

Yet Sanders is still pursuing it nationwide. Pandering from sea to shining sea.

Typical. You pay $15/hour, but I won’t. You provide Medicare for all, but Vermont won’t. The problem with Socialism is you eventually run out of other people’s money. When it comes to paying his own campaign, Bernie doesn’t want to run out of HIS own money. Socialism never works. https://t.co/qKb3ATNRWM

Even Vice President Joe Biden is calling Sanders’s bluff on his socialist health care plans. At an AARP forum this week, the 2020 contender explained that Sanders’s plan would cripple Medicare as we know it.