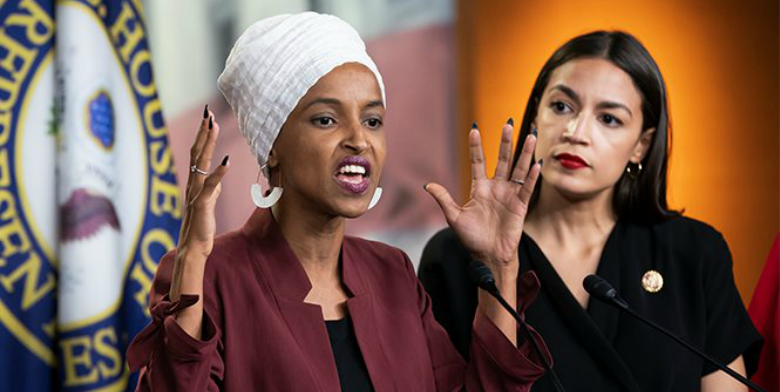 Wow!  The more we dig into Ilhan Omar’s past, the more we uncover, sort of the way Lee County Sheriff Carmine Marceno’s past is coming to haunt him from the things we discovered. Omar’s past is coming back to bite her in the revelations of her marrying her brother who turned out to be a sodomite, engaging in immigration fraud, violating federal law and being as anti-American as you can get, and how her father, along with other Somali war criminals, is living in the US illegally.  Now, it’s really hitting the mainstream that she used a false name to acquire her asylum into the US and eventually became a citizen.

However, in a post by Scott Johson of Powerlineblog, he posts a fifth piece by Steinberg.  This one is titled “Meet Leila Elmi: The Missing Link Showing Ilhan Omar Married Her Brother.”  Here’s some of the portions of that report:

On October 22, 2008, the U.S. State Department stopped accepting applications for the Priority 3/Refugee Family Reunification program — the process by which refugees can apply for asylum if one family member is already a legal U.S. resident. State halted the program because DNA testing — primarily of Somalis — had concluded that perhaps 87 percent of applicants were fraudulently claiming family relationships.

Despite continuing war, Somalia of 2008 was not comparable to the open hell of the early 1990s, when an eight-year-old Ilhan and her family fled to Kenya’s Dadaab refugee camps. She lived there from 1991 until 1995, aged eight to 12. Lutheran Immigration and Refugee Services then helped Ilhan, her sister Sahra, and their father Nur Said receive asylum in the United States along with thousands of other Somalis.

The complicated moral question of fraud, let alone fault, among this 1990s wave of refugees escaping civil war will never be answered with accurate statistics. We will have to settle for adjectives like “widespread” and “rampant.” Yet the negative outcomes cannot be ignored. Even refugees with strong desire to assimilate with Western civic order are hampered by the possible discovery of conflicting documents. And compromising information becomes leverage in a community already difficult to police.

Obviously, Omar had no say so in coming to America.  She was just a child at the time.

Additionally, the foreign national Omar apparently helped commit fraud was not fleeing hell in 2009, either. Ahmed Nur Said Elmi was a long-time citizen of the United Kingdom. He even possessed a high school diploma from the United States: Elmi attended a St. Paul, Minnesota high school for his senior year of 2002-2003, and graduated before returning to London.

In demonstrating what Steinberg refers to as perhaps the “most extensive spree of illegal misconduct committed by a House member in American history,” he wants people to understand that “We look to 1995 not to incriminate a kid, but to answer questions about what Omar did 14 years later as an adult U.S. citizen.”

I agree with his assessment.

He goes on to say that the family used false names to acquire their asylum, including Omar’s.

“The Omar family is a second, unrelated family which was being granted asylum by the United States. The Omars allowed Ilhan, her genetic sister Sahra, and her genetic father Nur Said to use false names to apply for asylum as members of the Omar family,” Steinberg wrote, claiming he had evidence of his statement.

He then says that the Minnesota congresswoman committed immigration fraud by marrying her brother, which is also bigamy and a crime, in 2009.

On Monday, President Donald Trump, the one who should be seeking justice in the Omar matter, tweeted about Omar’s anti-Israel comments, her trivializing of 9/11 and the constant undermining and criticism of the US as a whole.  He recommended that she along with other Democrat congresswomen who were born in the US  “go back and help fix the totally broken and crime-infested places from which they came.”

On Wednesday, at a North Carolina rally, Trump was applauded by the crowd who chanted “send her back!”

However, Trump claims he wasn’t “happy” about the chants and vowed to stop them in the future.

“It was quite a chant. I felt a little bit badly about it, but I will say this: I did start speaking very quickly. … I was not happy with it. I disagree with it, but, again, I didn’t say that; they did,” he told reporters at the White House.

Why would he want to stop the chants?  Isn’t that what he was implying in his tweets?  And as the chief law enforcement officer in the land and seeing that some of Omar’s crimes tip over into violations of federal law, shouldn’t he be the one calling for her indictment and possibly stripping her of her citizenship and sending her back to Somalia?  One would think so.

Additionally, Steinberg provided the following evidence and commentary regarding Omar’s marriage to her brother and subsequent immigration fraud.

Confirming some of the above information, as it might appear on their 1995 U.S. immigration papers, is not difficult. A basic background search shows that “Nur Omar Mohamed,” “Ilhan Abdullahi Omar,” and “Sahra Noor” all received SSNs in 1995 or 1996 in Virginia. Verified address records show adult members of the Omars living at three addresses in Arlington, Virginia at that time: 1223 South Thomas Street, 1226 South Thomas Street, and 1107 South Thomas Street.

The remaining evidence below verifies a sibling relationship between Ilhan and Ahmed.

Sahra Noor is the only person Ilhan Omar has ever publicly identified as her sister. Ilhan and Sahra have also, publicly and often, referred to the same man as their father. And, per Preya Samsundar’s 2016 investigation, they both identified this man as “Nur Said”:

The above image, a screenshot of Sahra Noor’s confirmed Facebook account, was first published by Preya Samsundar in 2016.

He also identifies himself as “Nur Said”.

See below — this is a screenshot of his current Facebook account. As of this article’s publication, it is active and searchable by anyone online. (I have archived his page with archive.is):

Note this thumbnail of “Leyla Cilmi,” listed as a friend of Nur Said.

In 2018, as I published a series of articles investigating Ilhan’s past, this account name changed from “Leila Elmi” to “Leyla Cilmi.”

However, the URL did not change. It still refers to “leila.elmi”:

Below, see the 1997 marriage certificate for the only Leila Nur Said Elmi listed in the United Kingdom.

I retrieved this certified copy from a government records center in London in February of this year; note the date in the document’s lower right corner. This is a public record. Anyone can retrieve this document to verify its authenticity.

See that Leila attests to her father’s name being “Nur Said Elmi”:

So far, we have verifiable evidence that Ilhan Abdullahi Omar, Sahra Noor, and Leila Nur Said Elmi referring to their respective fathers as “Nur Said” or “Nur Said Elmi.”

Next, we have verifiable evidence showing the three are sisters, and are all referring to the same man.
——————–

See below: These two posts appeared on Ilhan Omar’s confirmed Instagram account in 2013 and 2015, respectively. (Instagram user “hameey” became the blue-checked “IlhanMN” account at some point in 2016. A cursory search through older posts on the “IlhanMN” account still reveals many instances of commenters addressing “IlhanMN” as “hameey.”)

However, a source within the Minneapolis Somali community had downloaded much of Omar’s Instagram account before posts were deleted.

The source recently reviewed these two deleted posts, recognized their significance, and sent them to me via email. I made these emails available to Power Line to confirm how I received these posts, and to confirm that this particular source had provided several other pieces of information that had proven authentic and verifiable:

You are looking at what appears to be Leila Elmi, Nur Said, and Ilhan Omar — together. According to Ilhan, they are pictured on an August 2011 trip to East Africa.

Now, see below: You are looking at what appears to be Leila Elmi in white, Ilhan in black, and Ilhan’s amazing caption in red:

Further, the above post, with the #londontrip hashtag, depicts Ilhan Omar’s infamous 2015 trip to the UK. This is the same trip on which Ilhan was photographed with Ahmed Nur Said Elmi himself:

Below, see one more piece of evidence establishing Leila Elmi as Ilhan’s sister. This post is currently live, and I have archived it.

In December 2016, Ilhan reported that she was harassed by a cab driver while in Washington, D.C. attending meetings. She claimed that the cab driver called her “ISIS” and threatened to remove her hijab. A few days later, Ilhan filed a report with the D.C. Department of For-Hire Vehicles and the D.C. Office of Human Rights.

Ilhan initially stated that she was accompanied in the cab by her “sister.” A Star Tribune reporter in 2016 claimed to have a copy of her complaint, and that it stated she had been in the cab with her sister.

A few months ago, I received a copy of Ilhan’s report via FOIA request. The description of the person Ilhan had been in the cab with was redacted.

Suleiman Axoow, per his profile, is a frequent host of social events for the Washington, D.C. Somali-American community. On December 9, 2016, Suleiman Axoow stated that he was with Ilhan soon after the cab incident:

Check the “Edit History” on Suleiman’s Axoow’s post. He even initially included a link to the Leila Elmi/Leyla Cilmi account:

It is not plausible to believe that Axoow simply made a mistake.

One would have to believe that Axoow:

Ilhan has steadfastly refused to give media the names of any of her siblings besides Sahra Noor. The only rational explanation: Leila Elmi was in the United States to visit Ilhan Omar, attended this dinner with her, and Ilhan (carelessly?) introduced her as Axoow describes.

We now have verifiable evidence that Ilhan Omar, Sahra Noor, and Leila Elmi are siblings with a father named Nur Said Elmi.

All that remains is to verify our sources’ claims that Ahmed Nur Said Elmi is indeed Leila Nur Said Elmi’s brother.

The question to now be asked is simple: When will the Trump administration begin to look into this and bring charges against Ilhan Omar?