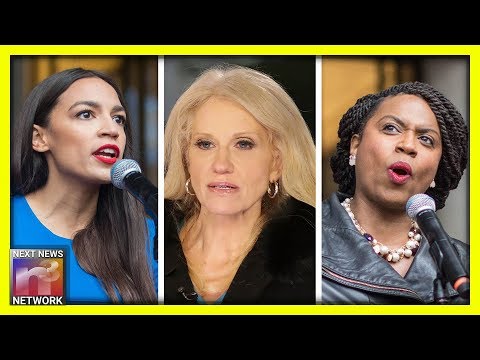 More 3D Chess from the Trump Administration is on full display.

Kellyanne Conway has been leading the fray to distract the Democrats while Trump and the rest of his staff concentrate on vital issues.

Here’s the latest from Gary Franchi of Next News Network:

When asked about the four freshman women, Conway said, “They represent a dark underbelly in this country of people who are not respecting our troops, are not giving them the resources they deserve.” Conway continued to blast the four radical congresswomen, saying, “They are the only four Democrats to vote against any form of humanitarian aid at the border when that vote was taken two weeks ago. They have no moral authority to ever talk about the border and the kids and the humanitarian crisis there. I was at the border on Friday, that aid is already making a difference.”

“We’re tired of people kneeling for the flag out of disrespect. We’re tired of some of these women palling around with terrorists. One of them is in pictures with somebody who was responsible for the deaths of four Israeli soldiers!”Conway told the Fox News hosts.

A clearly frustrated Conway asked, “Where is the press? Stop falling down on the job. Stop being so afraid women who got here four short months ago.”

Conway tweeted a video of her appearance on Fox News, adding:

“This goes way beyond these 4 people…goes to everybody who’s tearing down the American flag & putting up the Mexican flag. Goes for everyone who, like one of these Congresswomen, won’t denounce Antifa”.

“This goes way beyond these 4 people…goes to everybody who’s tearing down the American flag & putting up the Mexican flag. Goes for everyone who, like one of these Congresswomen, won’t denounce Antifa”. | https://t.co/dHY4odKbPF

Remember, Kellyanne recently got into it with Nancy Pelosi as well:

For those who have not heard, AOC recently called Nancy Pelosi a “racist” and the fight is now on.

Next News Network is reporting that Kellyanne Conway has put herself in the mix and things are getting extremely interesting.

“Major meow moment, a brushing back in a huge catfight. Really ridiculing them,” said Conway, accusing the four Democrats of “preening around” at the detention centers, but then rejecting a bill to improve the situation.

“You know who suffered? The people suffered, our brave men and women at Border Protection, the kids who these Democrats pretend they care so much about.”

After months of relative obscurity, it really looks like Kellyanne Conway is Trump’s “lady bishop” as she slices through the Democrats to cause derision and indecision.

Hopefully in 2020 the Dems will be scratching their heads AGAIN and wondering what just hit them.

Kellyanne Conway appears to be a major part of that strategy.