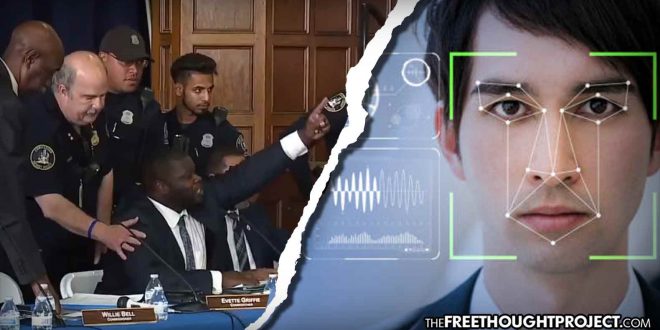 Imagine a day whereby police can randomly, actively, and at lightning speeds search databases for active search warrants using only a camera and facial recognition technology. That day is here. And despite the objections of high-ranking members in policing circles, the very real threat of loss of 4th and 14th amendment rights is upon us. And, as the following case illustrates, those who speak out against it — even from within the system — are subject to being silenced.

A Detroit police commissioner was arrested this week for disorderly conduct during a commissioner’s meeting in which several dozen protesters were present to voice their opposition to police using facial recognition technology.

”Don’t touch me! Don’t touch me! Get your hands off me!” Cried Commisioner Willie Burton as police officers removed him from the Durfee Information Center. Burton was taken out of the meeting, placed into a squad car, and taken to jail.

Burton was taken into custody after repeatedly questioning board chairwoman Lisa Carter as to what she would do differently in her new term as board chairperson. Carter found Burton to be “out of order” and asked police to remove him.

The arrest was legal, and I’m not criticizing my officers…But after weighing the totality of the circumstances, I thought it best to drop the charges, in order to maintain a harmonious relationship with the board and the people who elected (Burton).

Carter also weighed in on Burton’s arrest, denying she knew he had been arrested and encouraging decorum in future meetings. She said:

The board did not want him arrested in the first place…Hopefully in the future, we can all understand there’s a time when people can talk during meetings, and that we need decorum, so that we can have orderly meetings. That’s my only goal.

According to the Detroit News, “tensions are running high” as the police commissioner board is seeking to approve or ban the controversial use of facial recognition technology which allows for any citizen’s facial imagery to be used to solve crimes. The information is accessed without a warrant and without consent from the citizens, prompting many constitutional activists to cry foul.

While police insist the facial recognition technology will only be used in major crimes, many disagree and say there’s absolutely no guarantee police will not abuse the power at their disposal.

Already, several cities have banned the facial recognition technology but unless the bans are implemented on a state by state basis many fear the growing power of the police state will be further expanded to continue to violate citizens’ rights to privacy — if there are actually any rights left at this point.

As TFTP has reported, police are already connected directly into citizens’ homes by way of technology such as Alexa, Amazon’s automated assistant. Alexa has reportedly already called police when the software believed domestic violence was taking place in a New Mexico home. Now, imagine Alexa with a camera, scanning every individual’s face attempting to match those images with those of suspects caught on camera.

Add the idea of that technology being carried out again and again as citizens pass by digital cameras at intersections while driving their cars, strolling over sidewalks, and entering public buildings, banks and parks. Now imagine those searches being done with supercomputers and the public has a very real possibility of 911 being called by machines much more than by humans. Talk about Big Brother!

Mix that technology with proactive policing techniques which try to predict who, what, where and when a crime will take place and we are ultimately living in the age and era of the Minority Report, a Hollywood film starring Tom Cruise featuring a policing supercomputer powered and run by artificial intelligence.

That’s precisely why anti-facial recognition technology protesters were present at the commissioner’s meeting on Monday in support of Burton. Welcome to the dystopian, Orwellian, police state where even a police commissioner cannot express his objection to what the police want to do without being arrested for using his freedom of speech.