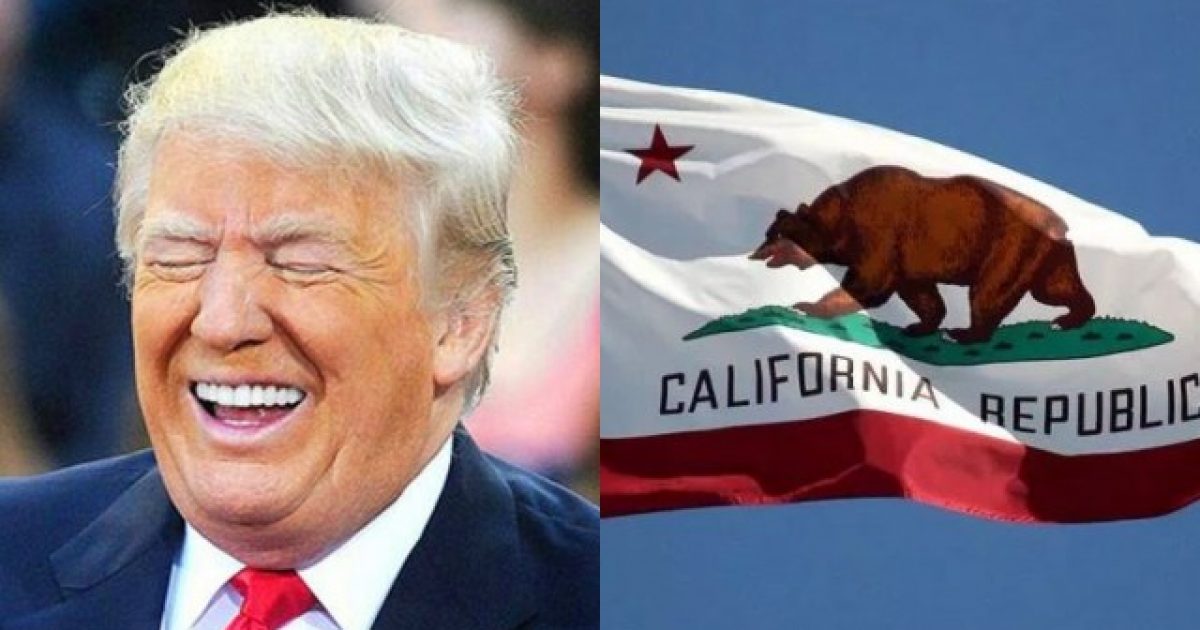 Shocker: Trump Is Raising MORE Money In California Than Nearly ALL Of His Democrat Challengers

Conservatives tend to write off California as a lost cause these days, and in terms of whether or not a Republican presidential candidate can actually win the state anytime soon, the odds are certainly against it.

Democrats have a solid lock on the governorship and a supermajority in the state Assembly. Democrats run all of the major cities. Democrats rule all the major urban areas.

But something is stirring that is favorable to the GOP and, in particular, to POTUS Donald Trump, as evidenced by the latest 2020 campaign fundraising figures from the Golden State.

According to CalMatters, POTUS has already raised $3.2 million in the “resistance” state — more than all but two of his major Democrat challengers:

This may come as surprise to the president, the national media and more than a few Californians, but there are plenty of Trump supporters in the “Resistance State,” too. And since the beginning of the year, they’ve been spending a lot of money to keep the president in the White House.

New campaign finance statistics show that President Donald Trump raised $3.2 million—more money from the California donor class than all of his Democratic challengers, but two.

Not only that, but the Trump campaign collected more from itemized small donors—those who gave in increments of less than $100 at a time—than anyone else in the field. The president bested even Democratic contender Bernie Sanders in the small-donor sweepstakes.

Campaign figures show Sen. Kamala Harris taking in the lion’s share of donations from California, followed by — and this is surprising — South Bend Mayor Pete Buttigieg. But the president is a solid third place, and well ahead of Joe Biden, Sen. Bernie Sanders, and Sen. Elizabeth Warren.

And here’s something else: Trump is, by far, well ahead of all Democrats in small-money donations (those amounting to $100 or less), meaning his support among ‘the people’ is a lot stronger than any single Democratic candidate, including Harris and Buttigieg, who are obviously benefiting from wealthy donors. In fact, those two aren’t even close; Sanders and Warren are behind the president in small-money contributions:

Remember that these contributions are only reported by federal election regulations if they come from donors who have given at least $200 over the course of the year. Anyone who is giving less than $100, but still showing up in these published figures is, almost by definition, a regular contributor.

Giving $25 here and $50 there, this sizable network of disaffected California Republicans is providing a steady stream of small, but reliable cash infusions to the president’s reelection campaign. Many political experts also see small donors as a good proxy for voter enthusiasm.

Some political analysts have suggested that the president make a play for California, given Democrat policies throughout the state that cater to illegal aliens over U.S. citizens and have created vast enclaves of homeless camps replete with filth, disease, drug use, and rodent infestations.

Some on social media have made it a point to ‘alert’ ruling Democrats including Gov. Gavin Newsom to the failures of their policies:

Wonder what’s going to sweep the nation first: California’s progressiveness or the plagues that are beginning to fester there?

Also the LA Times version of this story I found blaming climate change instead of the mountains of garbage is priceless.

California is haven for drug addicts and illegals who have soiled your once great cities with used needles and feces.

This is the future of progressivism. Own it.

California is haven for drug addicts and illegals who have soiled your once great cities with used needles and feces.
This is the future of progressivism. Own it.

You mean the homelessness, 41st ranking in K-12, highest poverty rate, most people on welfare, schools teaching in Spanish because of the illegals, exodus of residents to neighboring states, CALPERS trillions under water. Are effing serious? This state is an abortion.

As we noted in June:

Consider what’s been happening in these heavily-Democratic Left-wing states since even before POTUS Trump was elected (but certainly afterward): They’ve lurched so far to the Left on a host of issues that their states have become living, breathing examples of what happens when socialism fails.

These are all manifestations of Marxist bastions like Oregon, California, and parts of Washington, such as Seattle.

But they didn’t use to be.

Why not make a play for them? If not now, when? As Rush Limbaugh noted on his program Tuesday, the time could be very ripe for POTUS Trump to bring a true message of ‘hope and change’ to these Left-wing Twilight zones.

What’s more, he says that Democrats campaigning for their party’s 2020 crown a) aren’t going to talk about these bastions of disaster because the situations there were caused by Democrats — meaning things aren’t going to get any better, either; and b) will take the voters in these states for granted…