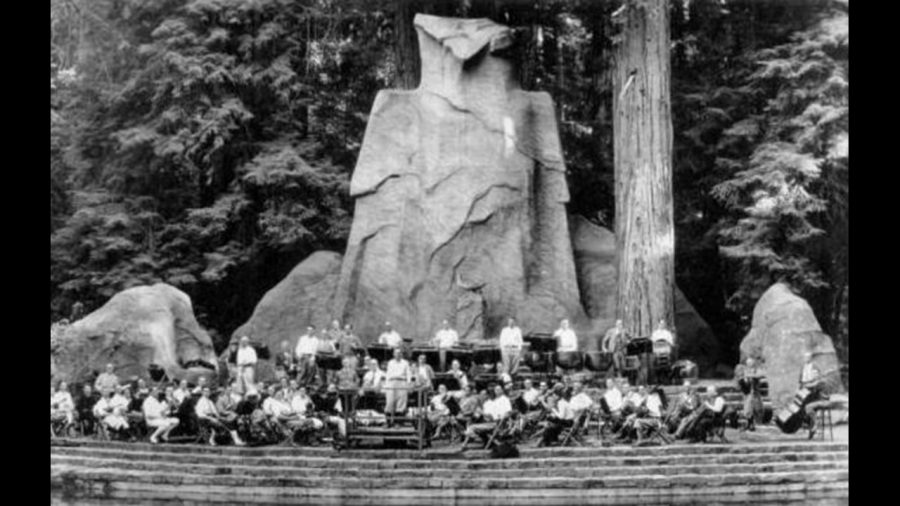 Dr. Eowyn’s post first appeared at Fellowship of the Minds…

Bohemian Grove is a 2,700-acre campground in Monte Rio in northern California, belonging to the Bohemian Club — a private San Francisco-based men’s club. In mid-July each year, Bohemian Grove hosts a more than two-week encampment of some of the most prominent men in the world, including U.S. presidents and politicians. Only active members of the Club and their guests may visit the Grove.

“The Bohemian Grove that I attend from time to time . . . is the most faggy goddamn thing you could ever imagine . . . it’s just terrible.”

The mid-summer encampment includes a ritual, first begun in 1881, called “Cremation of Care” in front of a 30-foot owl statue that symbolizes wisdom but which Alex Jones identified as Moloch. For many years, a recording of the voice of Bohemian Club member Walter Cronkite was used as the voice of The Owl during the ceremony. (See also “One-world-government Walter Cronkite: ‘I’m glad to sit at the right hand of Satan’”)

Sleeping quarters or “camps” are scattered throughout the grove, of which it is reported there were a total of 118 as of 2007. These camps, which are frequently patrilineal, are the principal means through which high-level business and political contacts and friendships are formed. (Wikipedia)

It is said that Mandalay camp is the camp “for international relations and consists of more than a few members offically or otherwise connected to foreign policy and the CIA. Mandalay is the only camp the average visitor cannot just walk into; an appointment or formal invitation is necessary.”

The names of Bohemian Grove attendees are not made public.

In July 2008, Wikileaks published the 2008 Bohemian Grove Guest List. Now, thanks to Crazy Days and Nights (CDAN), we have an updated list for 2018.

“. . . calling out many of Hollywood’s now-ostracized sexually misbehaving elite, sometimes years in advance of the mainstream media.

‘If you had been reading @entylawyer, you’d have known about Matt Lauer. And Harvey [Weinstein]. And Kevin Spacey. Just saying,’ tweeted New York professional Sara Zucker. Or as investigative journalist Mark Ebner (one of only 20 people who knows the blogger’s real-life identity) observes, ‘Enty Lawyer is like the anti-Perez Hilton. In my opinion, that’s what makes him so impressive, is that no one knows who he is, and he’s being proven right again and again. That’s like legendary shit.’”

Below is a screenshot of page one of the 60-page list on CDAN:

You can also see the list in text format, here (h/t codyave).

Below are the names of attendees I can identify. Note that some individuals are deceased, which means they were attendees of the 2008 Bohemian Grove. Names with a red check mark (√) stayed at the exclusive Mandalay camp: