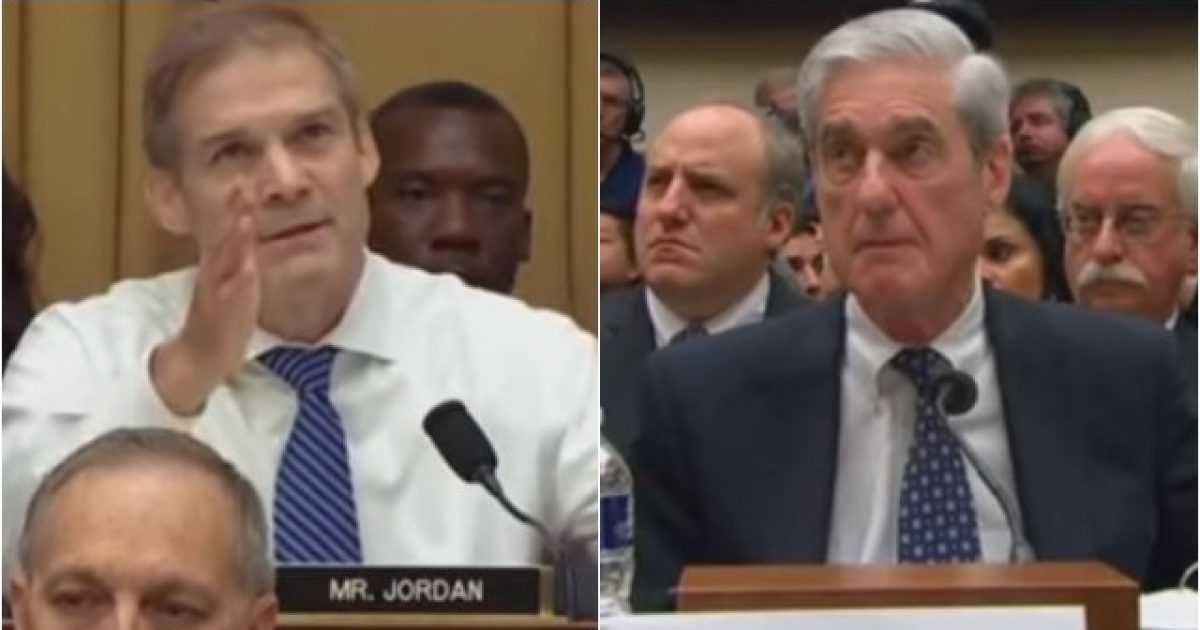 The severe beating of former Special Counsel Robert Mueller continued with Rep. Jim Jordan as he crushed him with facts.

And then he warned the former special counsel that he should not worry anymore because Attorney general Bill Barr is investigating his witch hunt.

Mueller has been taking a whooping from Republicans for hours and he is starting to look haggered and exhausted at the entire affair.

Transcript via Carmine Sabia at The Federalist Papers:

JORDAN: Director, the F.B.I. Interview Joseph miss day on February 28, 2017. He lied. You point this out an page 133, he also denied and falsely stated. In addition he omitted. Three times he lied to the F.B.I. Yet you didn’t charge him with a crime. Why not?

JORDAN: Why didn’t you charge him with a crime?

MUELLER: I can’t get into internal deliberations with regard to who would or would not be —

JORDAN: You charged a lot of other people for making false statements. Let’s remember this, in 2016 the F.B.I. Did something they probably haven’t done before.

They spied on two American citizens associated with a presidential campaign. George Papadopoulos and Carter Carter Page they went to the FISA court. They used the now famous dossier as part of the reason they were able to spy on page for better part of a year. With Mr. Papadopoulos they didn’t go to the courts they used human sources.

All kinds from the moment Papadopoulos joins the Trump campaign you have all these people around the world starting to swirl around him. Names like Halper, downer, Thompson, meeting in Rome and London. All kinds of places.

The F.B.I. Even sent a lady posing as somebody else, even dispatched her to London to spy on Mr. Papadopoulos. In one of these meetings Mr. Papadopoulos is talking to a foreign diplomat and he tells the diplomat Russians have dirt on Clinton.

MUELLER: I can’t get into the evidentiary.

JORDAN: You can, you gave us the answer. Page 192 of the report you tell us who told him. Joseph Misfin is the guy who told Papadopoulos.

The professor that teaches and two different universities. This is the guy who told Papadopoulos and the guy who starts it all.

JORDAN: When the F.B.I. Interviewed him in February, when the special counsel’s office interviewed him, did he lie to you guys, too?

MUELLER: Can’t get into that.

JORDAN: Did you interview him?

MUELLER: Can’t get into that?

JORDAN: Is he Russian or western intelligence?

MUELLER: Can’t get into that.

JORDAN: A lot of things you can’t get into. You can charge 13 Russians no one has ever heard, seen or you can charge them and all kinds of people around the president with false statements, but the guy who launches everything, the guy who puts this whole story in motion, you can’t charge him. I think that’s amazing.

MUELLER: I’m not certain I agree with your characterizations.

JORDAN: I’m reading from your report. He told Papadopoulos, Papadopoulos tells the diplomat, the diplomat tells the F.B.I., the F.B.I. Opens the investigation July 21, 2016 and here we are three years later July of 2019 the country has been put through this and the central figure who launches it all, lies to us, and you guys don’t hunt him down and interview him again and you don’t charge him with a crime.

James Comey told us at that point they had nothing. You do a 22 month investigation, you find no conspiracy, and what do the Democrats want to do? Keep investigating.

That’s exactly what Bill Barr is doing. And thank goodness for that. What they’re doing. They’ll find out why we went through this three-year saga and get to the bottom of it.