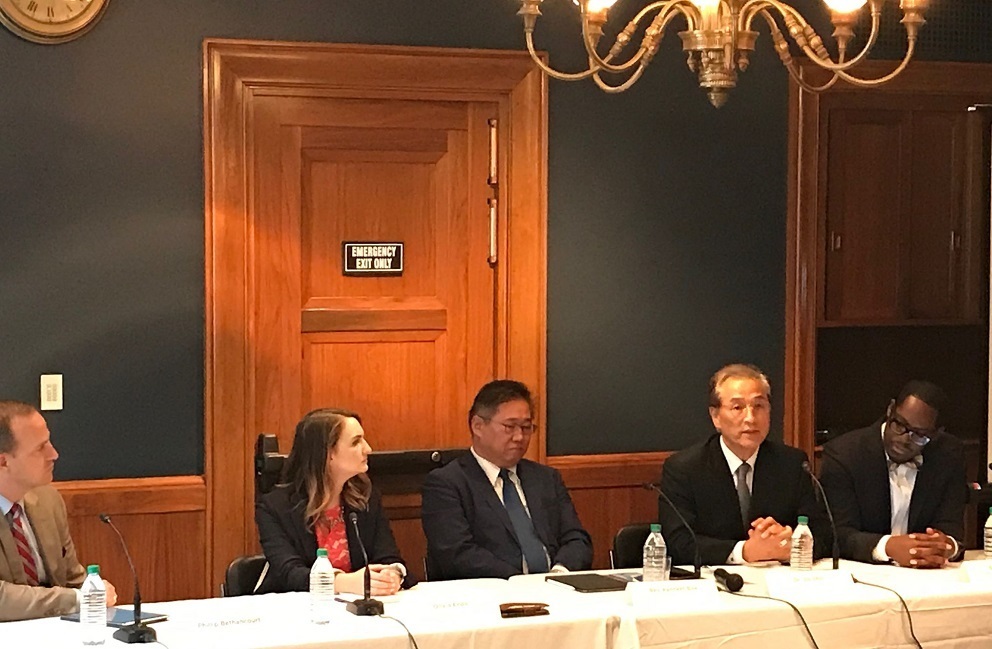 “But in fact Christ has been raised from the dead, the firstfruits of those who have fallen asleep. For as by a man came death, by a man has come also the resurrection of the dead. For as in Adam all die, so also in Christ shall all be made alive. But each in his own order: Christ the firstfruits, then at his coming those who belong to Christ. Then comes the end, when he delivers the kingdom to God the Father after destroying every rule and every authority and power. For he must reign until he has put all his enemies under his feet. The last enemy to be destroyed is death. For “God has put all things in subjection under his feet.” But when it says, “all things are put in subjection,” it is plain that he is excepted who put all things in subjection under him.When all things are subjected to him, then the Son himself will also be subjected to him who put all things in subjection under him, that God may be all in all.” -1 Corinthians 15:20-28

In a short video that has been produced, the fate of Christians in North Korea has been unveiled and the message has been echoed by a pastor who was a former prisoner in the Communist state, who informed American Christians of the true biblical worldview of what King Jesus brings to tyrants, and that is an end to their tyranny over their people and peace and prosperity in its place.

The film “Humanity Denied: Religious Freedom in North Korea” from the Ethics & Religious Liberty Commission was shown for the first time at the Senate Dirksen building Thursday.

Prior to the unveiling of the above documentary, the State Department’s Ministerial to Advance Religious Freedom was held just a short few miles away and a panel of experts spoke concerning what is going on in North Korea.

Kenneth Bae, a Korean-American pastor, who was held hostage in North Korea from 2012 to 2014, explained that when North Korean authorities arrested him and found out that he was a missionary, he was told that he was trying to overthrow the North Korean government. For years, Bae had been leading teams into North Korea so they could visit as tourists but pray and worship while in the land.

The North Koreans also told him that if one person came back and started an orphanage and 10 children became Christians, they will only multiply from there and present a threat to the nation.

Note what he said, and Christians should take heart that the Gospel of Jesus Christ, the administration of justice under God’s law and righteous people demanding such frightens Communists and the devils behind them.

“They said ‘we are not afraid of nuclear weapons … we are afraid of someone like you bringing religion into our country and use it against us and then everybody will turn to God and this will become God’s country and we will fall,” Bae said.

Bae was informed that he was probably the most dangerous American criminal they had ever had since the Korean War. He was sentenced to 15 years of hard labor, and was then sent to a North Korean labor camp. He was ultimately released in 2014.

Pyongyang was once known as the “Jerusalem of the Far East” and had a strong Christian presence, he explained. But today, except for the faith of those few who have been forced underground, most North Koreans have never heard the name of Jesus. In all the hundreds of refugees that he has met, Bae recounted that he never met a single escapee who fled North Korea that had heard of Jesus.

When Bae would talk about Jesus with North Koreans they would ask him if Jesus lives in Korea or China.

The official creed of the North Korean regime is called Juche, which means “self-reliance.”

When this philosophy was instituted in the 1960s they deliberately erased the name of Jesus from everything in culture; the reason they did this, Bae surmised, is because the Bible says in John 14 that Jesus is the Way, Truth, and the Life, that no one comes to the Father but through Him. Without Jesus no one can find the truth, the way, or receive life, he said.

Well, Amen!  That’s exactly right and Jesus isn’t sitting back waiting on men.  He has commanded us to go boldly and disciple the nations with no fear of men because the Captain of our Salvation leads us in the battle.  Christianity is going to take over the world, not Communism, not Islam, not anything else because the Scriptures say it will.  That’s why I quoted the context of 1 Corinthians 15 above.  You either believe Christ is bringing all his enemies into subjection or you don’t.  If you don’t, it’s probably because you have been taught really, really bad biblical doctrine.

Pastor Bae, the author of the 2016 memoir Not Forgotten: The True Story of My Imprisonment in North Korea, leads the Nehemiah One Million Prayer Petition Campaign, which is an effort to mobilize intercession for the people of North Korea.

During the time that Pastor Bae was in a labor camp, he had time to get to know many of the guards at the prison and despite the brainwashing they had endured from the Korea indoctrination centers, he came to believe they were really not much different than he was.

Hundreds of thousands of people are enslaved in these camps by North Korea, and Pastor Bae reminds people that there was a vast multitude of people who prayed for him continually during his imprisonment.

“People remembered; you and I had not forgotten you while you were in North Korea and I’ve not forgotten the people, the 25 million people who have never heard the name Jesus. I will restore them, I will reveal them as my people once again,” he said.

That’s faith right there, a belief that God is going to do what He said he would do.

Bae continues to do things for the North Korean people, things that may seem very simple to us such as supply aid and Bibles hid in bottles of rice down the river into the hands of the people and aiding those escaping North Koreans, including those who have been trapped in sex slavery in China.

He is trusting God that the current regime will one day fall, and it may be sooner than many people imagine.  However, he wants to be prepared to minister the saving Gospel to the people there.

“We need to get ready when North Korea opens up. If the North Korean regime suddenly falls, are we ready to have enough Bibles to let them know what is truth and how they can find truth?” he said.

Pastor Bae is looking to print 1 million Bibles and put them in the hands of the people before that collapse comes, putting a Bible in every household in hopes that it might be looked to as a blueprint to rebuild the society there on a firm foundation to the glory of God.

May God grant you your desires, Pastor Bae, and may all the nations bow their knees to King Jesus and receive the blessings of the forgiveness of sins and living under His holy law!

h/t The Washington Standard
Tim Brown is an author and Editor at FreedomOutpost.com, SonsOfLibertyMedia.com, GunsInTheNews.com and TheWashingtonStandard.com. He is husband to his “more precious than rubies” wife, father of 10 “mighty arrows”, jack of all trades, Christian and lover of liberty. He resides in the U.S. occupied Great State of South Carolina. . Follow Tim on Twitter. Also checkhim out on Gab, Minds, MeWe, Spreely, Mumbl It and Steemit
Share
Tweet
Share
Pin