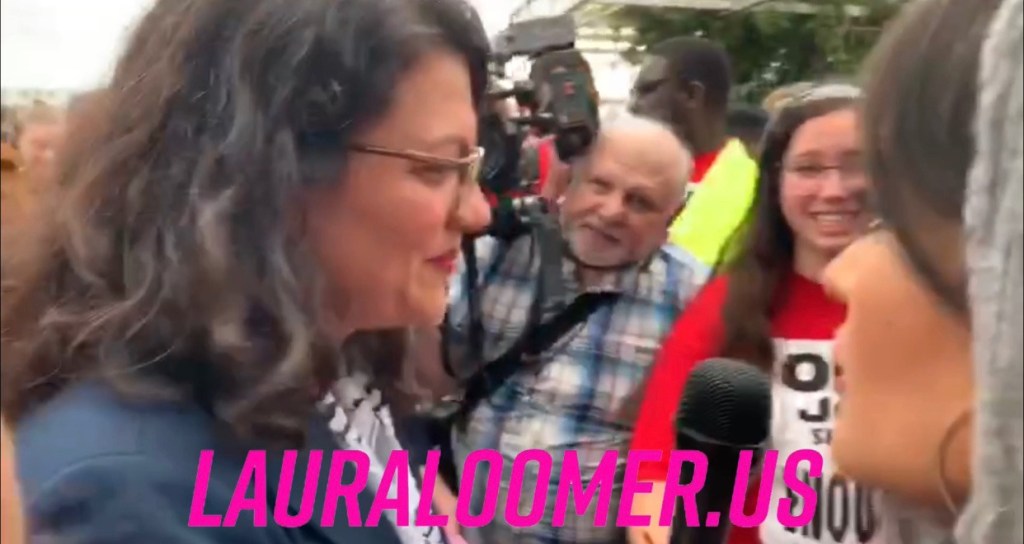 After speaking at a pro-socialist and communist rally at Reagan National Airport outside of Washington D.C. on Tuesday, Michigan Congresswoman Rashida Tlaib was asked by LauraLoomer.Us contributors Jacob Engels and Alicia Powe to condemn the recent Antifa terrorist attack on an ICE detention center in Washington state.

In the exclusive LauraLoomer.US video, Tlaib giggles continuously and refused to offer a simple condemnation of the firebombing by a prominent member of Antifa, a documented domestic terrorist organization.

When confronted about using anti-Semitic rhetoric comparing ICE detention facilities to the horror of the concentration camps in Nazi Germany, Tlaib giggled and donned a wide smile.

Here are some of the questions posed to Tlaib that she refused to answer:

“Rashida, will you condemn the ANTIFA fire bombing attack on an ICE facility?”

“Rashida, will you condemn ANTIFA?”

“Rashida, didn’t your language lead to the domestic terrorist firebombing at an ICE facility?”

“Will you condemn Hamas’?

“Will you condemn domestic terrorism?”

“Can you please speak up about Muslim women subjected to Female Genital mutilation?”

“Why did you call the President a Motherf**ker?”

Tlaib, a prominent member of the anti-American and anti-Semitic “Squad”, or as Laura Loomer calls them, the ‘Hamas Caucus”, declined to denounce the act of forced female genital mutilation. Not surprisingly, she would not condemn Sharia Law or terrorist linked groups like Hezbollah and Hamas.

“The Democrats have a legacy of associating with and promoting hateful domestic terrorist organizations like the Ku Klux Klan and Antifa. They relentlessly attack our President with baseless accusations of racism and white supremacy,. Their fascist smear machine galvanizes groups like Antifa and radical Islamists to viciously attack conservatives and disseminate propaganda through their allies in the mainstream media. The Democrats need to stop radicalizing their base and supporting domestics terrorist organizations like Antifa. We must charge the Democrats for aiding and abetting these terrorists,” Alicia Powe stated following the confrontation,” said Powe.

Ms. Powe, who is multi-racial, was recently attacked by a mob of Antifa drag queens at the Demand Free Speech rally in the nation’s capitol the first week of July.

“I think we need to send these anti-American bigots back to the shitholes from whence they came. I will buy their plane ticketstomorrow. As a gay man and fellow Michigander, Rashida Tlaib disgusts me. Joe Biggs is organizing a protest against these jagaloons in Portland on August 17th. Antifa can come tell this gay man what’s what.”

“Take your paper straws, high taxes, legacy of racism, and anti-Americanism and go to Iran, Venezuela or North Koreaand spew your hatred there,” Powe added.