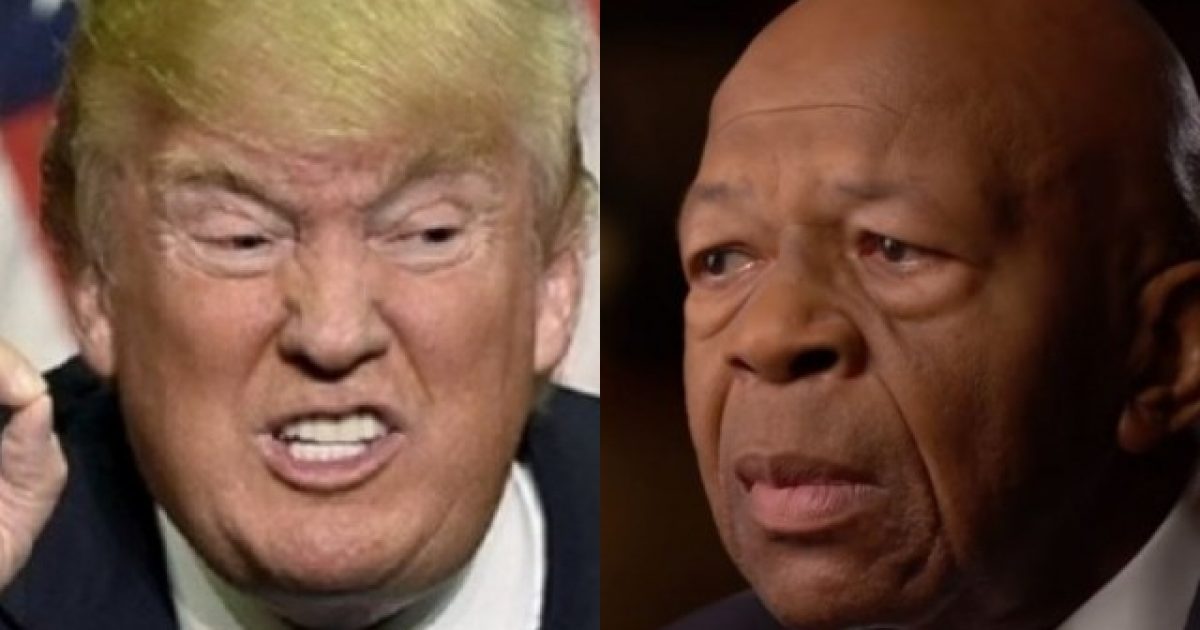 Dem Tried To Take Out Trump & Failed, Now Trump Moves In For The Kill (Politically, Metaphorically) On Elijah Cummings

OPINION & SPECULATION By Elder Patriot – this article contains editorial content by an opinionated author who is hoping you agree with him.  This is not an unbiased new report.

By now, those who are the target of President Trump’s tweets should be very worried.  Earlier today, President Trump set his sights on U.S. Rep. Elijah Cummings (D-MD). All indications are this isn’t going to end well for the Representative from Maryland.

“Rep, Elijah Cummings has been a brutal bully, shouting and screaming at the great men & women of Border Patrol about conditions at the Southern Border, when actually his Baltimore district is FAR WORSE and more dangerous.”

“His district is considered the Worst in the USA. As proven last week during a Congressional tour, the Border is clean, efficient & well run, just very crowded.”

“Why is so much money sent to the Elijah Cummings district when it is considered the worst run and most dangerous anywhere in the United States.”

“No human being would want to live there. Where is all this money going? How much is stolen? Investigate this corrupt mess immediately!” he said.

At the start of his presidency, President Trump’s tweets were dismissed as the act of a shoot-from-the-hip, out-of-control, chief executive ill-suited to be the leader of the free world.

However, history has proven that Trump’s tweets, after they’ve been given a chance to age, presaged Trump’s deep knowledge of the skulduggery of those aligned against him.

Remember the way the mainstream media reacted to this tweet from two weeks into his first term?

It’s almost as though Trump posts these tweets publicly to let his target know he’s gunning for them.  Inevitably, they begin making mistakes.

Now, two-and-a-half years later, that appears to be the case as the Deep State is on the verge of collapse.

We digress.  Back to Rep. Cummings and the two-pronged purpose of this morning’s tweets.

Last week, President Trump successfully used Twitter to tie leader Pelosi to the most radical elements of the Democratic Party – the squad.  Today, he forced Speaker Pelosi to defend one of the party’s more corrupt members.

In May, the National Legal and Policy Center (NPLC) filed a complaint with the IRS accusing Maya Rockeymoore, the wife of House Oversight Committee Chairman Elijah Cummings.

The NPLC charged Rockeymoore with commingling the finances of a charity she runs with a for profit LLC that she operates to derive “illegal private benefit” for herself and her husband.

That charity, the Center for Global Policy Solutions, took in millions of dollars from special interest groups that had business before Cummings’ Oversight Committee.

We’re betting President Trump is signaling that evidence exists that Cummings was peddling influence in a multi-million dollar pay-to-play scheme in concert with his wife.

Trump has linked the party’s exalted leader Nancy Pelosi to Cummings, at this time, for a reason.  The bet here is that the hammer of justice will soon drop on Cummings.

If Trump’s DOJ takes down a Democrat as prominent as Cummings on charges of corruption, he’s the chairman of one of the three most important House committees, he’ll have positioned himself to tie the entire Democratic Party to his corruption.

Finally, Cummings is one of three Committee chairmen – Adam Schiff and Jerrold Nadler are the other two – that are leading the move to impeach the president.

Nadler’s impeachment effort was neutered on Wednesday after special counsel Robert Mueller did more to damage the effort than to advance it.

What we are seeing now is the president laying the foundation for his re-election in 2020.