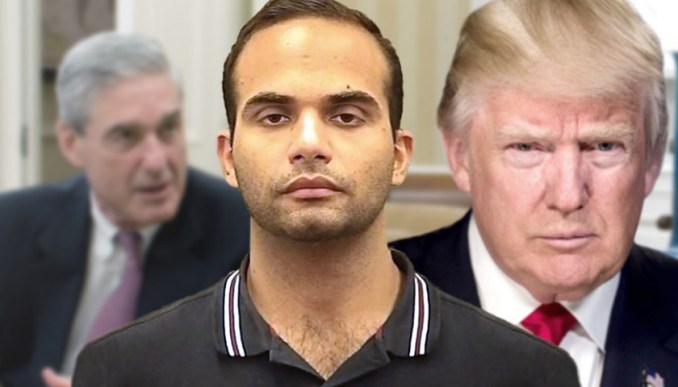 It appears as if the Department of Justice is now looking into transcripts of a recorded conversation between former Trump campaign aide George Papadopoulos and “at least one government source” during a conversation that took place in 2016, which could be a smoking gun, which the FBI did not make part of its surveillance warrant application.

As is often the case, the federal government seems to be not only complicit but consistently involved in Brady violations when it comes to making cases against what it considers enemies of the state.

The Justice Department’s internal review of the Russia investigation is zeroing in on transcripts of recordings made by at least one government source who met with former Trump campaign aide George Papadopoulos overseas in 2016, specifically looking at why certain “exculpatory” material from them was not presented in subsequent applications for surveillance warrants, according to two sources familiar with the review.

The sources also said the review is taking a closer look at the actual start date of the original FBI investigation into potential collusion between members of the Trump campaign and the Russians, as some allege the probe began earlier than thought. Both components are considered key in the review currently being led by Attorney General Bill Barr and U.S. Attorney from Connecticut John Durham –– an effort sure to draw more attention in the coming weeks and months now that Robert Mueller’s testimony is in the rearview.

The recordings in question pertain to conversations between government sources and Papadopoulos, which were memorialized in transcripts. One source told Fox News that Barr and Durham are reviewing why the material was left out of applications to surveil another former Trump campaign aide, Carter Page.

“These recordings have exculpatory evidence,” the other source added. “It is standard tradecraft to record conversations with someone like Papadopoulos—especially when they are overseas and there are no restrictions.”

What’s even more interesting is that the source said that the transcripts indicate that Papadopoulos denied having contact with Russians to obtain any “dirt” on Hillary Clinton.

Of course, Papadopoulos deems thrilled about the investigation as it would exonerate him.

“The heat is now on the Clinton errand boy, and wannabe spy, Alexander Downer. The world will love to see the secret recordings of my “meeting” with him. They will be out as soon as Mifsud provides his deposition to Durham. Glorious,” he tweeted.

The heat is now on the Clinton errand boy, and wannabe spy, Alexander Downer. The world will love to see the secret recordings of my “meeting” with him. They will be out as soon as Mifsud provides his deposition to Durham. Glorious.

He had previously tweeted, “Have been contacted by about a dozen Australian journalists for comment on Clinton errand boy, Alexander Downer, and him being idiotic enough to spy on me with his phone. The transcript of my meeting with him will show Australia was willfully trying to sabotage Donald Trump.”

Have been contacted by about a dozen Australian journalists for comment on Clinton errand boy, Alexander Downer, and him being idiotic enough to spy on me with his phone. The transcriptof my meeting with him will show Australia was willfully trying to sabotage Donald Trump.

And while Fox doesn’t name the ‘government source,’ it’s undoubtedly Australian diplomat and Clinton ally AlexanderDowner, who was “idiotic enough” to spy on Papadopoulos with his phone, according to the former Trump aide.

No gray area about the claim Papadopoulos was making here, is there? https://t.co/IAYQarAY5w

But Papadopoulos did not only meet with Mifsud and Downer while overseas. He met with Cambridge professor and longtime FBI informant Stefan Halper and his female associate, who went under the alias Azra Turk. Papadopoulos told Fox Newsthat he saw Turk three times in London: once over drinks, once over dinner and once with Halper. He also told Fox News back in May that he always suspected he was being recorded. Further, he tweeted during the Mueller testimony about “recordings” of his meeting with Downer. –Fox News

It was on June 5 of this year that Papadopoulos made the claim that Stefan Halper **also** made an attempt to record their conversation on his cell phone. https://t.co/In0UvCPKOJ

Former Rep. Trey Gowdy (R-SC) chimed in on the transcripts back in May.

“Some of us have been fortunate enough to know whether or not those transcripts exist. But they haven’t been made public, and I think one, in particular … has the potential to actually persuade people,” he continued, adding “Very little in this Russia probe I’m afraid is going to persuade people who hate Trump or love Trump. But there is some information in these transcripts that has the potential to be a game-changer if it’s ever made public.”

Of course, this past week, Rep. Jim Jordan (R-OH) pointing out that the Russia investigation only officially opened with the FBI after Papadopoulos mentioned a rumor that Russia had “dirt” on Hillary Clinton.

“The FBI claims the counterintelligence investigation of the Trump campaign began on July 31, 2016, but in fact, it began before that,” Nunes said. “In June 2016, before the investigation was officially opened, Trump campaign associates Carter Page and Stephen Miller were invited to attend a symposium at Cambridge University in July 2016. Your office, however, did not investigate who was responsible for inviting these Trump associates to the symposium.”

Mueller replied: “Those areas…I’m going to stay away from.”

Apparently, from what we learned from Robert Mueller, he should have stayed away from the entire fiasco that cost the American people tens of millions of dollars.

Meanwhile, Papadopoulos said that in May 2016, he was approached by two U.S. military officials based in the U.S. Embassy in London—Gregory Baker and Terrence Dudley. He told Fox News they were questioning him about his ties in the Middle East and Trump’s relationship with Russia.

“Both wanted to ingratiate themselves in campaign via myself,” Papadopoulos tweeted last year.

Hons: @SenatorBurr and @MarkWarner if I do testify, I think it’s also important for me to detail my interactions with US intelligence officials from US Embassy, London. Gregory Baker and Terrence Dudley. Both wanted to ingratiate themselves in campaign via myself.

It is unclear at this point what, if any, involvement Baker and Dudley had in collecting intelligence related to the Trump campaign. Both Baker and Dudley disputed Papadopoulos’ tweet, and reportedly said they reached out to him out of curiosity.

“Maybe a better course of action is to figure out how the false accusations started,” Jordan said Wednesday. “Here’s the good news—that’s exactly what Bill Barr is doing and thank goodness for that.”

Well, this will just be more political theater in the coming days.

What continues to amaze me is how the American people are up in arms that all of this unlawful behavior of our federal government targeted then-candidate and later President Donald Trump, but they seem oblivious to the fact that the same ones that targeted Trump are also currently targetting them.