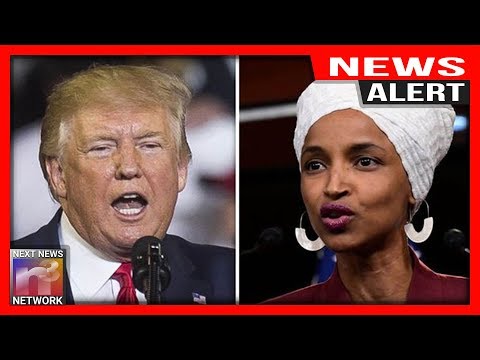 Ilhan Omar is acting less like an “American” every single day.

She has now attacked tens of millions of American voters, and tens of thousands of our readers.

Here’s the video from our friends at Next News Network:

Let me get this straight.

Ilhan Omar just attacked what is the second largest voting base in America (behind white women).

In an interview with Al Jazeera’s Mehdi Hasan, the anti-Semitic lawmaker, Rep. Ilhan Omar (D-MN), was asked about how much she felt about President Trump’s “Muslim ban?” Hasan asked Omar, “Do you think President Trump doesn’t want people who look like you in the country?”  Omar responded by saying that “If we were really being honest, about what could be masqueraded as a national security issue, we know that no one from any of these countries [included in the temporary travel ban] has ever posed a threat to our national security.”

The Muslim freshman U.S. congresswoman represents the 5th district in Minnesota, where over 100,000 Somali’s reside. Her district which is primarily made up of residents from one of the countries included in Trump’s temporary travel ban has been labeled by the FBI as the “Terror recruitment capital of the United States.”

“More men and boys from a Somali American community in Minneapolis have joined — or attempted to join — a foreign terrorist organization over the last 12 years than any other jurisdiction in the country.

FBI stats show 45 Somalis left to join the ranks of either the Somalia-based Islamic insurgency al-Shabab, or the Iraq- and Syria-based ISIS combined. And as of 2018, a dozen more had been arrested with the intention of leaving to support ISIS.”

According to the draft copy of Trump’s executive order, the countries whose citizens are barred entirely from entering the United States is based on a bill that Obama signed into law in December 2015.

The Al Jazeera host continued, asking Omar about the fear Americans have of Muslims committing acts of terror in the United States. Hasan asked Omar, “A lot of conservatives, in particular, would say that the rise in Islamaphobia is a result not of hate, but of fear, and legitimate fear, they say of  ‘Jihadist terrorism.’ Whether it’s Fort Hood or San Bernadino or the recent truck attack in New York.

What do you say to them?

Leave it to Ilhan Omar to attack the white majority in this country.

Attacking the majority is not generally perceived to be a good strategy for winning elections.

But maybe that is what the people in her district want to hear?

Here are some of Ilhan’s latest embarrassments:

Who does this evil woman think she is fooling?

She hates America and what it stands for, and only survives because 100,000 Somali-Americans live in her district.

The more hate she preaches, the bigger her star may grow with people who SUPPOSEDLY wanted to move here to leave people like her behind.

Common sense is not a requirement for residence or citizenship, but it probably should be.

People like Ilhan Omar who have moved here en masse to fix what was not broken.

Now the whole Democrat party has gone insane and many are following her lead.