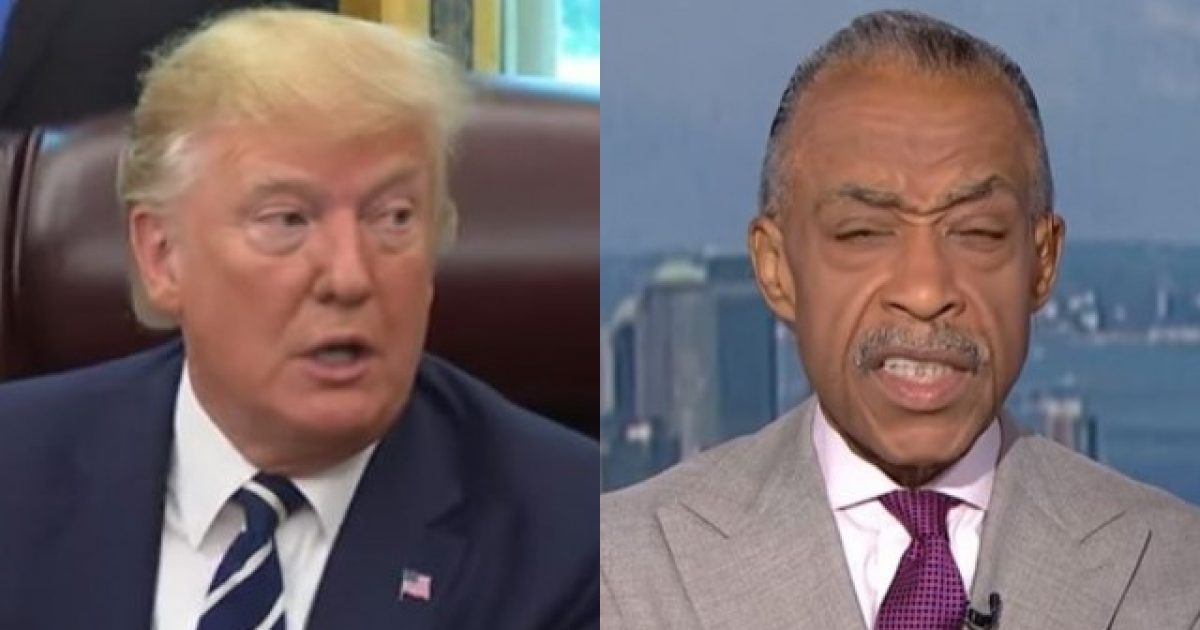 Trump: Al Sharpton Is A ‘Con Man Who Hates Whites’

Before billionaire businessman and real estate developer Donald Trump became president, no one ever called him a racist or a bigot.

That’s probably because he really isn’t one, and what’s more, some of the more notable minorities who have been omnipresent on the American scene and in New York — the president’s home city — have long known that he’s not the racist Left-wing Democrats claim he is.

One of these notables is Al Sharpton, a race-baiter who earns a living keeping blacks and whites stirred up by pretending that the 1960s didn’t change a thing in terms of civil rights for all Americans.

Case in point: After the recent media/Democrat-created “controversy” over the president’s comments regarding “bully” Rep. Elijah Cummings (D-Md.), here comes Sharpton, floating up from the bottom where he feeds, to hold a “press conference” to discuss how Trump is a “racist” for criticizing a black lawmaker whose Baltimore-area district is an absolute mess.

The president is heading him off at the proverbial pass, so to speak.

In early Monday tweets, POTUS accurately described Sharpton as a con man who used to needle Trump for [financial] favors back in the day.

”I have known Al for 25 years. Went to fights with him & Don King, always got along well. He ’ loved Trump! ’ He would ask me for favors often,” Trump wrote on Twitter about the founder of the National Action Network.

I have known Al for 25 years. Went to fights with him & Don King, always got along well. He “loved Trump!” He would ask me for favors often. Al is a con man, a troublemaker, always looking for a score. Just doing his thing. Must have intimidated Comcast/NBC. Hates Whites & Cops! https://t.co/ZwPZa0FWfN

“Al is a con man, a troublemaker, always looking for a score. Just doing his thing. Must have intimidated Comcast/NBC. Hates Whites & Cops!”

Sharpton announced on his Twitter account late Sunday that he and former Republican National Committee chairman Michael Steele, who was also a former lieutenant governor of Maryland, would “address Trump’s remarks & Bi-Partisan outrage in the black community.”

Like we said, a manufactured controversy. Criticizing a politician of color after doing so little for his constituents following 30-plus years of ‘service’ is legitimate; it’s not racism. But because Democrats and Leftists cannot refute the fact that yes, Cummings’ district is a s**thole, they must manufacture a bogus claim of bigotry.

For Democrats, it’s wash, rinse, repeat: They are completely out of ideas, they cannot compete with the president’s accomplishments, and the cities and jurisdictions they run are becoming lawless, third-world concrete jungles of decay and hopelessness, so all they’ve got is, “Trump, you’re a racist!”

What started the feud?

“Rep. Elijah Cummings has been a brutal bully, shouting and screaming at the great men & women of Border Patrol about conditions at the Southern Border, when actually his Baltimore district is FAR WORSE and more dangerous,” the president wrote last week in defense of immigration officials who are contending with a migrant crisis on the border of Democrats‘ making.

POTUS laid into Cummings after the career politician from Maryland blew up at acting Secretary of Homeland Security Kevin K. McAleenan for his agency’s [imagined] mistreatment of migrant kids detained at the U.S. border.

During more political theater testimony before another useless Democrat-run House committee in which Left-wing hacks like Cummings are using not as a means of crafting legislation aimed at fixing immigration-related issues but as platforms to rail against the Trump administration, McAleenan said border officials were doing their “level best” to take care of the thousands of kids that adults have brought illegally across the border.

Cummings exploded: “What does that mean? What does that mean when a child is sitting in their own feces, can’t take a shower? Come on, man. What’s that about? None of us would have our children in that position. They are human beings.”

As for the long-serving Maryland lawmaker, the president tripled down on criticizing him Monday after Democrats and squishy Republicans cranked up the outrage machine over the weekend.

”Baltimore, under the leadership of Elijah Cummings, has the worst Crime Statistics in the Nation. 25 years of all talk, no action! So tired of listening to the same old Bull…Next, Reverend Al will show up to complain & protest,” Trump tweeted on Monday. “Nothing will get done for the people in need. Sad!”

Who can seriously argue with that assessment? Democrat voters continue to put the same losers in office year after year, election after election, and nothing changes in their districts. In fact, you could argue that they simply get worse.

As for Baltimore? Well, you be the judge as to who is correct, Cummings or the president:

Trump calls Baltimore rat infested. Facts show that Baltimore is ranked in the top cities for largest rat population. Trump calls out the leadership, and is called a racist. Anyone else sensing a pattern here?https://t.co/n8hlPH3qse

It is so sad to see @VictorBlackwell & @CNN turn the light currently shining on #WestBaltimore into a race issue. This could result in a positive change. @RepCummingscould help get his district in order. Listen to one of his constituents explain the “rats & rodents” problem. pic.twitter.com/LTG8AnT27x

Let’s continue to expose the truth. This is a neighborhood filled w/families that have small children. West Baltimore is filled with trash thanks to dumping. A problem city officials should have addressed years ago. This is @RepCummings district. @realDonaldTrump

In this video, @RepCummings constituents explain how clean Coppin State University is kept, while their neighborhood is used as a dumping ground. I was told if trash was not in marked green cans, the city refused to remove it. More abandoned row houses. #WestBaltimore pic.twitter.com/wuSNoiNJED

As for notable minorities who had no ‘race’ issues with the president before he became a Republican president, here’s a little flashback involving then-businessman Trump and Jesse Jackson: