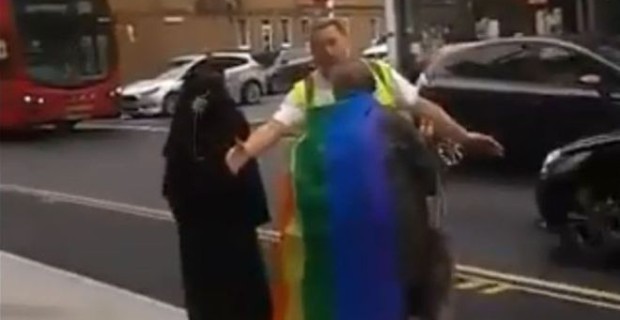 A video out of the UK shows a Muslim woman in a full Islamic veil shouting “shame on you!” at members of a gay pride parade.

The incident was caught on camera during a Waltham Forest Pride event in Walthamstow on Saturday.

“Shame on you! Shame on all of you!” the woman repeatedly screams at another person wearing a rainbow flag.

“Shame on you, you despicable people!” she adds, remarking, “God created Adam and Eve, not Adam and Steve.”

Disgusting homophobic abuse at those on Waltham Forest Pride today.

No matter what form hate comes in, we must stamp it out and say no to all forms of hate! Also, very importantly we cannot call out one form of hate but be silent/complicit on others. @GalopUK @stonewalluk pic.twitter.com/kDAFoAb8Vw

A leftist then tries to respond by saying, “That’s what the racists and fascists say about you,” but the Muslim woman continues screaming.

“Abusing someone because of their sexual orientation or gender identity is a hate crime,” tweeted the Met Police in response to the video.

The woman in the clip hasn’t been identified (gee I wonder why not) and no arrests have been made.

This footage once again highlights the disconnect between leftists who virtue signal all day about their love and respect for cultures that are ruthlessly intolerant of their lifestyles.