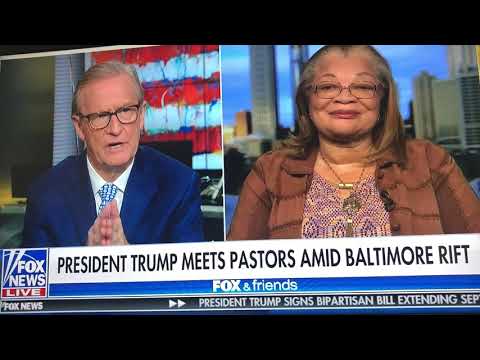 Evangelist Alveda King, who happens to be the late MLK’s niece, appeared on Fox & Friends Tuesday and set the record straight about claims that our President is a racist.

Here’s a video of her appearance from Alveda’s personal YouTube channel:

Alveda King, the niece of civil rights icon Dr. Martin Luther King Jr., came to the defense of President Trump on Tuesday after his brutal criticism of the city of Baltimore and its congressman, Democratic Rep. Elijah Cummings.

King appeared on Fox News on Tuesday to address charges from politicians and pundits that Trump’s comments were racist.

“All of that news is absolutely fake,” King said. “You know, we all believe the same. That’s something the president has said, one race, one human race,” King said. “So, he’s not a racist, absolutely is not,” she said, adding “the programs that he has moved forward, the higher job market is helping African Americans. The criminal justice reform, helping African Americans.”

Trump met with 20 African American faith leaders on Monday after he was blasted for his comments. Trump over the weekend called out Cummings, who represents the district in the House, for the dismal state of affairs in the city, calling it a “disgusting, rat and rodent infested mess.”
“They began to hurl insults at the president. Nobody wants to understand that,” King said. “What the president’s simply saying is your communities need to be fixed and he said to Representative Cummings, Elijah Cummings, who actually said either abort the babies now or you’ll kill them later. He says things like that and then you look at his community and you see individuals suffering, communities suffering, and families suffering.”

Trump on Tuesday said black residents of Baltimore have praised him for his comments.

“They are so happy, because I get the calls,” Trump told reporters before his departure to deliver a speech in Jamestown, Va. “They are happy as hell. The African-American community is so thankful at what I’ve been doing. They’ve been calling me and saying finally somebody is telling the truth.

Trump is not racist and only the most brainwashed libtards contend he is.

Their story is bull $hit and most Americans know it.

Here is some recent racism truth from our site: