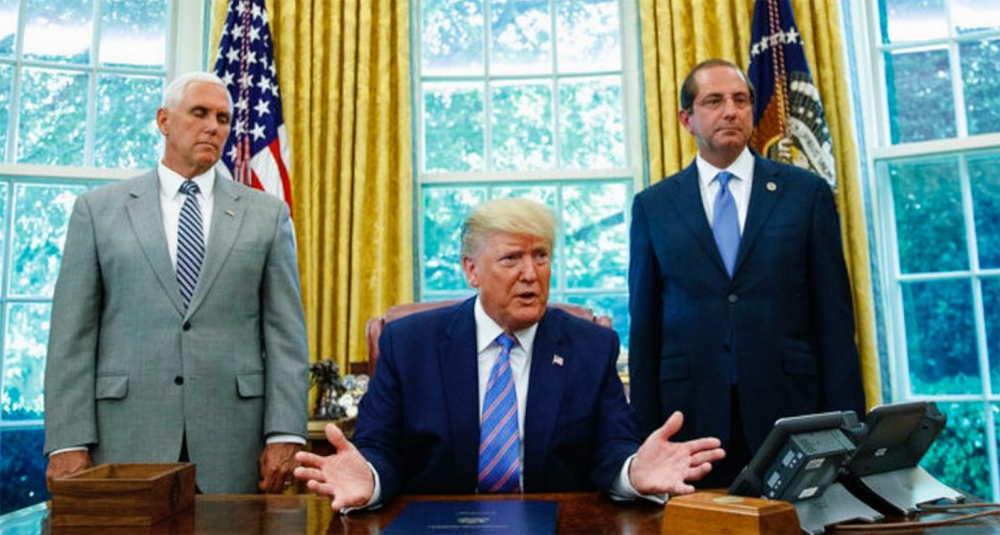 The administration of President Donald Trump revealed a plan on July 31 that would let Americans buy lower-cost prescription drugs from Canada.

The action plan released by the Department of Health and Human Services (HHS) and the Food and Drug Administration (FDA) included two pathways to get lower-cost drugs to consumers.

One relies on the Federal Food, Drug, and Cosmetic Act to allow people to import drugs from Canada. That was expected to lead to “significant cost savings” for Americans, the FDA said.

“Under this pathway, States, wholesalers, or pharmacists could submit plans for demonstration projects for HHS to review outlining how they would import Health-Canada approved drugs that are in compliance with section 505 of the FD&C Act,” the agency stated.

The second path allows manufacturers to import versions of FDA-approved drugs that the companies sell in other countries and are the same versions used in the United States.

Health and Human Services Secretary Alex Azar said that Trump had been pushing to lower the cost of drugs and that he spoke with the president about the issue Tuesday night.

“I just got off the phone with him,” Azar told CNBC. “Working on a plan on how we can import drugs safely and effectively from Canada so the American people get the benefit of the deals that pharma themselves are striking with other countries.”

“President Trump has been clear: for too long American patients have been paying exorbitantly high prices for prescription drugs that are made available to other countries at lower prices,” Azar added in a statement.

“We support the President and Secretary’s efforts to bring down drug prices for Americans,” added Acting FDA Commissioner Ned Sharpless.

“We know there are many operational challenges to address through each of these pathways, and are actively working through them as we look to formally announce these policies, with opportunity for public comment, in the coming months.”

Most patients take affordable generic drugs to manage conditions such as high blood pressure or elevated blood sugars. But polls show concern about the prices of breakthrough medications for intractable illnesses like cancer or hepatitis C infection, whose costs can run to $100,000 or more. And long-available drugs like insulin have also seen price increases that have forced some people with diabetes to ration their own doses.

The administration’s move comes as the industry is facing a crescendo of consumer complaints over prices, as well as legislation from both parties in Congress to rein in costs.

Trump is supporting a Senate bill to cap medication costs for Medicare recipients and require drugmakers to pay rebates to the program if price hikes exceed inflation. Democrats in the House are pressing for a vote on a bill allowing Medicare to directly negotiate prices on behalf of millions of seniors enrolled in its prescription drug plan.

Separately, the Trump administration is pursuing a regulation that would tie what Medicare pays for drugs administered in doctors’ offices to lower international prices.

The importation idea won praise from a key lawmaker, Sen. Chuck Grassley (R-Iowa) chairman of the panel that oversees Medicare. Grassley said on Twitter that importation would lower prescription drug costs, and all drugs from abroad must be verified as safe by the FDA. He and presidential candidate Sen. Amy Klobuchar (D-Minn.) have a bill to facilitate importation.