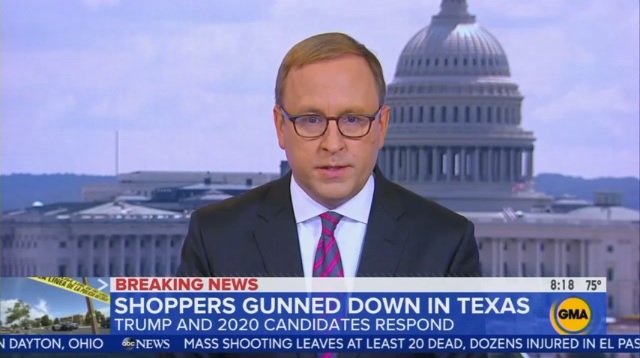 It wasn’t 24-hours since the first of two tragic mass shootings on Saturday and ABC News was entrenched and spewing the liberal hate that demanded that President Trump be considered the cause of the violence. Suggesting it was “fair” to blame Trump for the shootings during Sunday’s Good Morning America, chief White House correspondent Jon Karl argued the shootings were “going to be something that he is going to have to answer for.”

Karl was teed up by GMA co-host Dan Harris who played a soundbite of former El Paso Congressman Beto O’Rourke, who called “racist” Trump the cause of the shootings. “Several of the Democrats who are running for president right now are tieing President Trump to these mass shootings,” Harris said. “Is it fair, Jon, to tie the President to this violence?”

Do Democrats have to answer for the 37 people shot in Chicago this weekend?