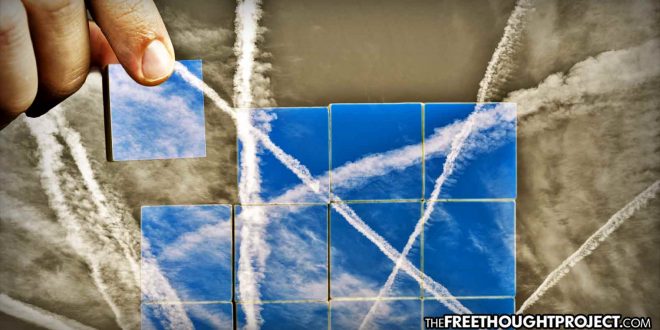 No, we are not a satire site. We are not a conspiracy theory site. The information you are about to read is factually accurate and 100% real despite the ostensible ‘skeptics’ who claim otherwise. The controversial subject of geoengineering or weather modification – which was popularized, and oversimplified with the term “chemtrails” – is once again stepping from the shadows and into the light of public scrutiny. And it may soon be a reality as Harvard scientists plan first ever experiment to spray particles in the sky to dim the sun.

What was once a conspiracy theory is now the subject of congressional debate, peer-reviewed studies, and now a Harvard experiment. Harvard scientists will attempt to replicate the climate-cooling effect of volcanic eruptions with a world-first solar geoengineering experiment. The university announced this month that it has created an external advisory panel to examine the potential ethical, environmental and geopolitical impacts of this geoengineering project, which has been developed by the university’s researchers.

According to Nature Magazine, Louise Bedsworth, executive director of the California Strategic Growth Council, a state agency that promotes sustainability and economic prosperity, will lead the Harvard advisory panel, the university said on 29 July. The other seven members include Earth-science researchers and specialists in environmental and climate law and policy.

What was once a conspiracy theory will soon be a reality—any day now.

Known as the Stratospheric Controlled Perturbation Experiment (SCoPEx), the experiment will spray calcium carbonate particles high above the earth to mimic the effects of volcanic ash blocking out the sun to produce a cooling effect.

The experiment was announced in Nature magazine last year, who was one of few outlets to look into this unprecedented step toward geoengineering the planet.

If all goes as planned, the Harvard team will be the first in the world to move solar geoengineering out of the lab and into the stratosphere, with a project called the Stratospheric Controlled Perturbation Experiment (SCoPEx). The first phase — a US$3-million test involving two flights of a steerable balloon 20 kilometres above the southwest United States — could launch as early as the first half of 2019. Once in place, the experiment would release small plumes of calcium carbonate, each of around 100 grams, roughly equivalent to the amount found in an average bottle of off-the-shelf antacid. The balloon would then turn around to observe how the particles disperse.

Naturally, the experiment is concerning to many people, including environmental groups, who, according to Nature, say such efforts are a dangerous distraction from addressing the only permanent solution to climate change: reducing greenhouse-gas emissions.

The idea of injecting particles into the atmosphere to cool the earth also seems outright futile considering what scientists are trying to mimic—volcanic eruptions. If we look at the second largest eruption of the 20th century, Mount Pinatubo, which erupted in the Philippines in 1991, it injected 20 million tons of sulfur dioxide aerosols into the stratosphere. Scientists from the USGS estimated that this 20 million tons only lowered the temperature of the planet by about 1°F (0.5°C) and this only lasted a year because the particles eventually fell to back to Earth.

The Harvard team, led by scientists Frank Keutsch and David Keith, has been working on the SCoPEx project for several years but they haven’t always been in total agreement. In fact, as Nature reported, Keutsch—who is not a climate scientist—previously thought the idea to be “totally insane.” But he’s since changed his mind. As Nature reports:

When he saw Keith talk about the SCoPEx idea at a conference after starting at Harvard in 2015, he says his initial reaction was that the idea was “totally insane”. Then he decided it was time to engage. “I asked myself, an atmospheric chemist, what can I do?” He joined forces with Keith and Anderson, and has since taken the lead on the experimental work.

Adding to the questionable nature of this experiment is the fact that it is largely funded by none other than Microsoft co-founder, Bill Gates. Gates is no stranger to funding controversial experiments as he’s publicly funded many of them including one that would implant devices into babies to automatically give them vaccines.

While the Harvard team’s experiment may sound like something out of a dystopian science fiction movie, the reality is that it has long been on the table of governments and think tanks from around the world. In fact, just last November, a study published in Environmental Research Letters, talked about doing the exact same thing—geoengineering and planes spraying particulates into the atmosphere to curb global warming.

What’s more, that study echoed the sentiments of then-CIA director John Brennan when he addressed the Council on Foreign Relations in 2016, detailing a similar process of spraying chemical particulates in the atmosphere to cool the planet.

At the meeting, Brennan addressed instability and transnational threats to global security at a meeting with the Council on Foreign Relations. During his long-winded talk of threats to US interests and how the largely CIA-created ISIL threat is impacting the world, Brennan brought up the topic of geoengineering.

Again, this is not some conspiracy theory. Watch him say all of this in the video below starting at the 12:05 marker.

The extent to which Brennan talked about stratospheric aerosol injection shows that he and the CIA have likely been considering this for some time.

Although we are hearing more and more talk about geoengineering, it has been around for a very long time and not just in the realm of conspiracy theories. In fact, scientists have already suggested that it could be going on right now, unintentionally.

Researchers with the National Oceanic and Atmospheric Administration (NOAA) are suggesting contrails from airplanes may be inadvertently geoengineering the skies.

Chuck Long is a researcher with the Cooperative Institute for Research in Environmental Sciences (CIRES) at the NOAA Earth System Research Laboratory at the University of Colorado in Boulder. At the American Geophysical Union Fall Meeting in 2015, Long and his team released their paper, “Evidence of Clear-Sky Daylight Whitening: Are we already conducting geoengineering?” The analysis found that vapor from airplanes may be altering the climate through accidental geoengineering.

To be clear, no one here is claiming to be an expert on climate change or the effects of geoengineering. But one thing is clear and it’s the fact that there is still much to be debated and learned before humans deliberately begin altering Earth’s climate. Aside from doing nothing to curb carbon emissions, if we are so quick to jump on this method, it could set off a chain reaction that could prove to be catastrophic.

Please share this article with your friends and family so that they may see what’s being planned for their future.