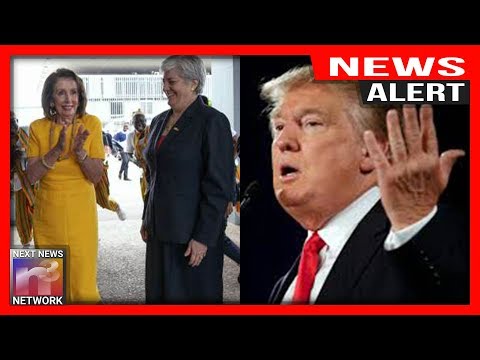 For those of you that have not heard, Nancy Pelosi has led a delegation of Black Democrats to Ghana.

While there, she has apparently found The Speaker’s New Groove.

Watch the video, but not on a full stomach.

Or does she just not dance well because she’s white?

Why in the hell are Dems celebrating the 400th anniversary of the first African slaves arriving here?

First, they were pictured eating at a five-star restaurant in Italy and now the 13-person delegation of Democrats from the Congressional Black Caucus are in Ghana.

This trip’s purpose was to mark “400 years since the first set of slaves left the shores of Africa across the Atlantic to the USA”.

Democratic leader Nancy Pelosi and her delegation are having a rip-roaring time on this boondoggle. She released a statement about the trip confirming what most Americans already know…this is an official boondoggle hosted by Pelosi and paid for by the taxpayers:

Solemnly, the delegation will pay respects at Cape Coast and Elmina Castles and the “Door of No Return,” to observe the 400th Anniversary of the First Enslaved Africans Landing in America.

“As we face evolving global security challenges, our delegation will thank our men and women in uniform and receive briefings from U.S. military leaders at U.S. Army Africa headquarters.”

“In Ghana, our delegation looks forward to high-level discussions on key issues such as regional security, sustainable and inclusive development and the challenges of tomorrow including the climate crisis.”

I still can’t understand why the anniversary of African slaves landing in America is worthy of celebration.

Maybe Nancy was trying to sell the other 12 back to Ghana?

I mean Sheila Jackson Lee and Ilhan Omar have to be worth something, right?

Nancy was privately celebrating slavery and found 12 blacks to celebrate with her.

Don’t forget that the Democrats are the real racists against blacks in this country:

The Democrats are a party that only serves to guarantee that minorities never succeed and remain in a state of victimhood.

It’s time for blacks in America to break the chains that continue to bind them.

Trump Issued Thanksgiving Message That Could Be a Hint About 2024
November 29th, 2021 Flag And Cross

The True Story And Meaning Of The Hanukkah Holiday
November 28th, 2021 The Lid

‘Puzzling’ Surge In Heart Disease Among Soccer Players Is A ‘Coincidence,’...