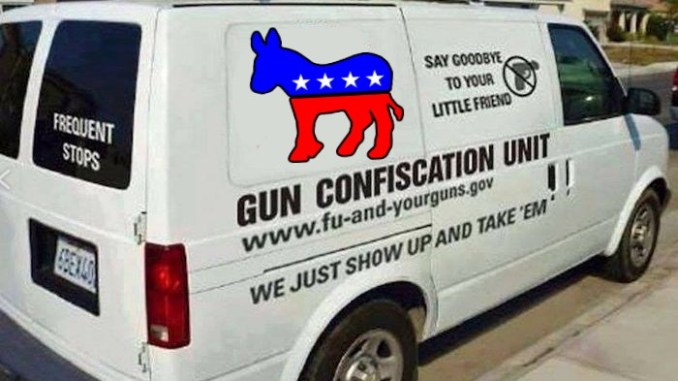 There is no question that the recent shootings in Dayton, Ohio and El Paso, Texas were a tragedy for those affected. As well, these shootings can be seen as nothing less than acts of domestic terrorism (they fit the basic definition of terrorism, and they were domestic at their core). But the El Paso shooting stands out as a hand over-played by the Progressive-Fascist Left, both domestically and internationally.

As usual, the mainstream media is committing sins of omission are a fast and furious rate, pun intended. Even as they paint the societally dysfunctional shooter, Patrick Crusius, as a “white nationalist”, they are conveniently leaving out his self-declaration as a neo-Progressive; a self-declaration proven by his own hand in his “manifesto”.

Gateway Pundit points out that Crusius was a proponent of both basic universal income and universal healthcare, two goals only valued by the Progressive-Fascist Left:

“In the near future, America will have to initiate a basic universal income to prevent widespread poverty and civil unrest as people lose their jobs (to automation). Joblessness is in itself a source of civil unrest…Achieving ambitious social projects like universal healthcare and UBI would become far more likely to succeed if tens of millions of defendants are removed.”

These are hardly the words of a Capitalist, a Conservative, a Libertarian, or a devotee of the President’s. In fact, these are the words of the Ocasio-Cortez Left; the Progressive-Fascist Left. So it is that once again the mainstream media is executing ideological and political dishonesty in its overt activism. Where they are making Crusius sound like a Trump supporter, he is actually a supporter of the fringe Left, although one could hardly deduce that from their coverage.

Then we have the international one-world, Progressive-Fascist disingenuousness. Mexico’s Foreign Minister, Marcelo Ebrard, as much as said his government was going to hold the United States legally responsible for the endangerment of Mexican nationals in El Paso.

“The president of the Republic has instructed me so that this posture and indignation from Mexico is translated, first in protecting affected families, and then in legal actions, efficient and prompt, quick and convincing so that Mexico can demand the conditions to protect to the Mexican-American community and Mexicans in the United States,” (emphasis mine).

While not every Mexican national who illegally crosses into the United States is a violent criminal or a drug cartel-related operative, there is a good percentage who are. There are reports daily of lives ended tragically, senselessly, and unnecessarily by illegal immigrants who have often been ordered deported and who disappeared into the sanctuary city mist. These Mexican nationals have committed crimes against American citizens; citizens the United States government has a duty to protect from “enemies foreign and domestic” – like illegal immigrants from Mexico who would even be considered criminals in their own country.

It takes a real set of cojones for Ebrard and his government to even suggest legal action against the United States in the wake of this senseless tragedy. It is an international insult to the United States and President Trump would be well within his moral and ethical right to shut the Mexican border completely citing their exact demand in reverse: we demand the conditions to protect American citizens from criminals who choose to violate our immigration laws to affect violent crime in our country.

As the mainstream media, the Democrats, and the Progressive-Fascists play politics with this heart-wrenching act of violence keep in mind that they are advancing a false narrative even as they try to emotionalize the event for their own ideological purposes. Repulsive doesn’t even begin to summarize their intents, words, and actions.

My sincere condolences and prayers to all who are affected by this event.

Frank Salvato is a partner at TRR Consulting Group, LLC, a reputation management and organizational strategies group. He serves as managing editor of The New Media Journal. His writing has been recognized by the US House International Relations Committee and the Japan Center for Conflict Prevention. His analysis has been published by The American Enterprise Institute, The Washington Times, and Accuracy in Media, and is syndicated nationally. Mr. Salvato has appeared on The O’Reilly Factor on FOX News Channel and is the author of six books examining internal and external threats facing our country. He can be heard twice weekly on “The Captain’s America: Third Watch” radio program syndicated nationally on the Salem Broadcasting Network and is a host on The Underground Podcast Network.