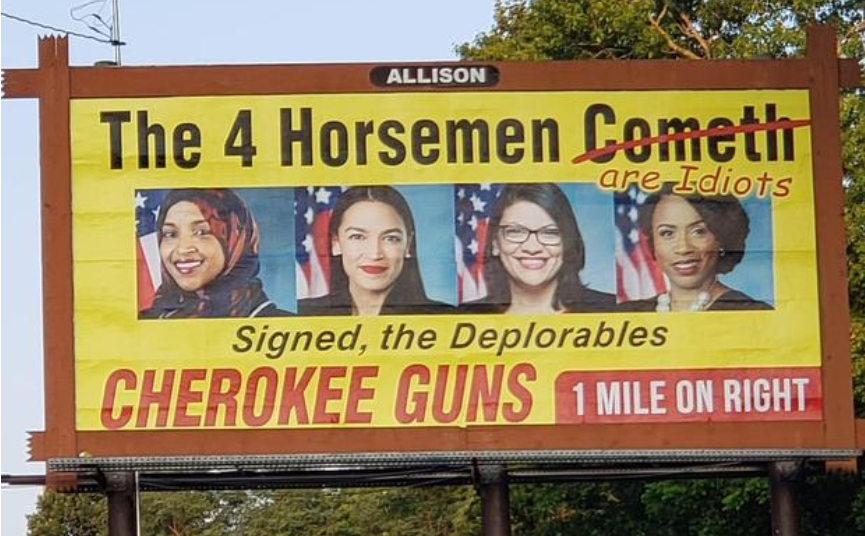 Cherokee Guns took down its “Four Horsemen” billboard in Murphy, WDEF reported. Murphy is about 240 miles west of Charlotte, in Cherokee County.

It was replaced with another advertisement for the gun store, one focused on the First Amendment, according to WTVC. The new billboard says “First Amendment. Enough Said. Cherokee Guns.”

The original billboard said “The Four Horsemen Cometh,” with the word cometh covered with a large red slash and the words “are idiots” intentionally scribbled beneath it, McClatchy news group reported.

It also said “Signed, the Deplorables. Cherokee Guns,” sandwiched around pictures of Congresswomen Alexandria Ocasio-Cortez of New York, Ilhan Omar of Minnesota, Ayanna Pressley of Massachusetts and Rashida Tlaib of Michigan. They are also known as “The Squad,” CNN reported.

A salesperson for the gun shop said the billboard was not removed because of the mass shootings but because of death threats posted online, according to WDEF.

He also says the store also took down its Facebook page on its own after they were contacted by the Secret Service. He says they and the FBI are involved after people have threatened their lives and President Trump’s life following the reaction to the billboard.

Doc, the owner of Cherokee Guns, told us last week that if need be, they would fight and they sue the advertising company to keep the billboard up in order to stand for their beliefs.

The advertising company salesman said last week he regretted the controversy, and that the billboard company was considering taking down the sign.

“Freedom of speech is a right. Unless it is something illegal or offensive, we use our best judgment and let it go. It is tragic what happened. He has been a great client of ours for a while, he just has his beliefs,” Danny Coleman said, CNN reported. “I wish it hadn’t happened. I didn’t want to hurt anybody.”

After the initial controversy sparked by the billboard, the store said it would distribute identical bumper stickers to those who visited the store and ate a piece of bacon and vowed to vote for President Donald Trump in 2020, according to McClatchy news group.

“Snowflakes and Liberals are not eligible,” said the post.

A store employee said the billboard had nothing to do with the race but was a matter of putting “the face of socialism out there so the American people can get a good look at it,” per WHNS.

News of the controversy caused some of the politicians targeted by the billboard to respond.

“How the hell is this not inciting violence?” Tlaib asked on Twitter.

Pressley tweeted, “Racist rhetoric from the occupant of the White House has made hate our new normal. We are still vulnerable.”

This is not the first time the store, founded in 2012, has had a controversial billboard up in Murphy. Earlier this month, the shop posted photos of another that featured a muscular Donald Trump flexing his arms in front of a U.S. flag.

“No collusion. No Obstruction. Just Guns!!! One mile on the right,” said the billboard.