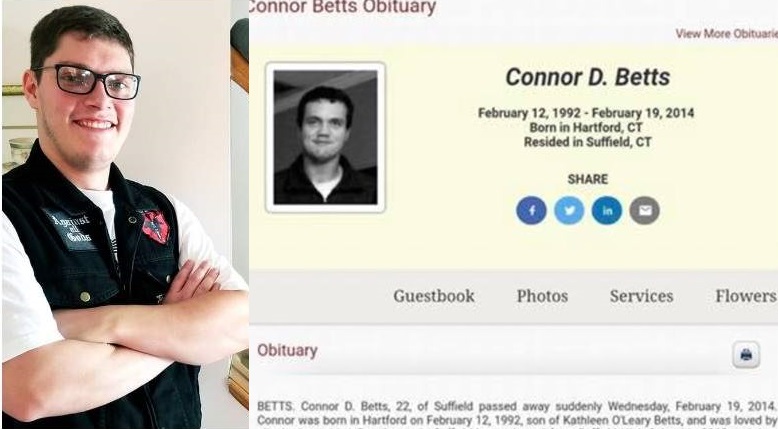 As I lay this out, don’t think for a minute that I don’t consider the possibilities that our government and their accomplices in the media wouldn’t pull a stunt like this and fabricate the narrative concerning Connor Betts.  However, while many are quick to jump on the allegations that the Dayton, Ohio shooter Connor Betts actually died in 2014, that doesn’t seem to meet with the facts.

I received the following phone screenshot from a friend of mine and decide to follow up with it as at first glance, it appeared to be pretty amazing on several levels.

First, you will note the names are similar, with just the middle name being different.

Second, you will also note that the Connor Betts who died in 2014 also had a sister named Megan.

OK, so let’s break this down, shall we?

First, I’ll note that Legacy.com has removed the following post you can see here, which is the page above.

According to the Hartford Courant, he was killed as a result of electrocution due to an automobile accident.

However, the man that Dayton Police named in the shooting was not Connor D. Betts.  Rather, they named Connor Stephen Betts as the perpetrator, whose birthdate in 1994 would age him at 24 years old.

Additionally, he was registered to vote in Greene County, Ohio and had been participating in elections in the county since 2012 till the time of his death in 2014.

Most interesting is the both Conners had a sister named Megan.

In the case of Connor D. Betts, his sister is listed as Megan B. Betts, according to court records and news articles.  However, she was likely born around 1986.  Keep that in mind.

In the case of Connor S. Betts’ sister Megan, her full name is listed at Megan Kathleen Better, and she was murdered on August 4, at only 22 years of age, having been born in 1997.

While people in a passing glance might mistake both Connors for the same person, via internet photos, the reality is that they really didn’t look at all the same in appearance.

Frankly, I don’t think they are that resemblant when you consider the post above and the pictures posted at Heavy.com.

However, while I do think there is definitely something more than what is being put out in the media, and have said so, these two guys are not the same people.  If you still believe that, then please provide the evidence to substantiate your claims.  Otherwise, I will chalk this up to a simple misunderstanding in the discovery of what actually took place.