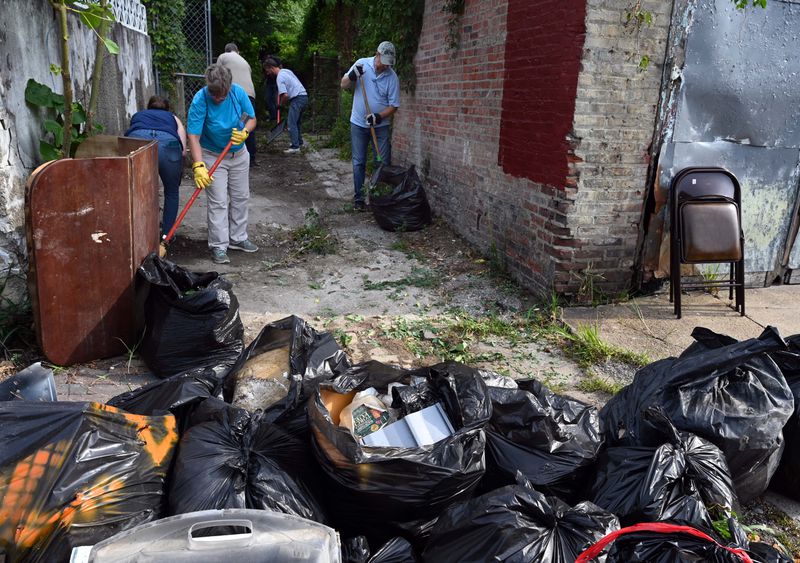 Evidently no one ever explained what “looking a gift horse in the mouth” means to The Baltimore Sun Editorial Board.

You will not believe what you are about to read.

Rather than saying “Thank You” and leaving it at that, The Baltimore Sun thought they should use a much needed cleanup as political ammo.

The title of the piece is “We assume it was pure motives that led a Trump supporter to launch a cleanup in Cummings’ district, right?”

Here is the disgusting piece of opinion that The Baltimore Sun considers good journalism:

It made for good photos, compelling videos and catchy Twitter hashtags. A group of conservatives rolled their pickup trucks into one of West Baltimore’s most impoverished neighborhoods Monday for a cleanup day. Loaded down with trash bags and shovels, they cleared alleyways of old tires, food containers, paper and other debris. They pulled up weeds and cut away overgrown grass. The group posted before and after pictures on social media showing their progress.

The effort was organized by pro-Trump activist Scott Presler. He claimed the event was not political. Yes, he was inspired to come by tweets from President Donald Trump describing the area, represented by U.S. Rep. Elijah Cummings, as a “rodent infested mess.” But the visit wasn’t about showing support or animosity for either man, he said.

Look, we appreciate anyone who is willing to roll up their sleeves to help Baltimore. More than 170 people came from all over the country and cleaned up nearly 12 tons of trash, according to Mr. Presler’s Twitter feed. He doesn’t post any photos of the totality of the trash, so we’ll have to take his word for it.

But if this was all about “Americans helping Americans,” why all the videos of Baltimore residents thanking Mr. Trump for bringing attention to the issue? We happen to know that not everybody in West Baltimore feels that way. And in the same posts as the videos, why the frequent reminders that this is in act Mr. Cummings’ district?

Of course it was somewhat political, just like the op-ed that bashed it.

There is one BIG, or maybe I should say YUUUUGE, difference.

The Trump Supporters got it done while the left did what the left always does.

They whined about it.

UNZ.com had this to say about the PRIMARILY WHITE board:

After it was dubbed a “disgusting, rat, rodent infested mess,” by President Trump, a bunch of white conservative supporters of his decided to travel to West Baltimore and clean up the city.

The result? This spontaneous act of momentary gentrification resulted in white conservatives picking up 12 tons of trash the citizens of West Baltimore – mind you, the population is 83 percent black – had left all throughout the community, never cleaning it up but only augmenting the piles of refuse on a daily basis.

Enter the primarily white editorial board of The Baltimore Sun. They blasted the white conservatives who cleaned up the 83 percent black community of West Baltimore for “reinforces the tired image of our failing urban cores. That the poor people in this dilapidated city can’t take care of their own neighborhoods and all the public officials around them have failed as well. The bureaucratic, all-talk Democrats strike again. If a crowd of volunteers could clean up 12 tons of trash in 12 hours, how incompetent and helpless must Baltimoreans be if they can’t manage it in decades, right?”

Leave it to the libtards to b*tch and moan about a result produced by well-meaning conservatives that they might never have achieved on their own.

Who cares if it’s politics?

The job got done didn’t it?

Elijah Cummings should have bought those guys dinner.

I guarantee you that if he did we’d see praise from the same Baltimore Sun.

Here are some other examples of how liberals and media “whine” about things:

You know the game out there.

They are politicians, duh!

At least it got done and the people of Baltimore are grateful, even if their local rag is not.

Why didn’t Baltimore residents clean up their own trash to politically support Elijah Cummings?