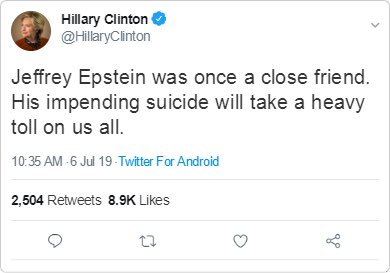 The above photo of a tweet was not actually sent by Hillary Clinton, but rather a parody account.

The point is that many of us knew this was coming.

Ann Coulter predicted it a couple of weeks ago.

So the Saturday morning news that Jeffrey Epstein is dead by suicide is big news, but not a huge shock.

Jeffrey Epstein, the disgraced financier who was indicted on sex trafficking charges, died overnight by an apparent suicide in his Manhattan jail cell, according to multiple reports Saturday morning.

Law enforcement officials told ABC News that Epstein, 66, died by suicide in his cell at the Metropolitan Correctional Center (MCC). His body was found Saturday morning about 7:30 a.m., The New York Times reported.

I am a one man show at DC Clothesline, so I just wanted to get this story up for now.

I will try to dig deeper in coming days.

It’s a shame that someone who may have had dirt on the Clintons would end up dead by suicide AGAIN:

As Jeffrey Epstein meets his maker, let’s all realize that in the end justice always prevails, even if not on this earth.

For Epstein’s sake, hopefully he repented in prison.