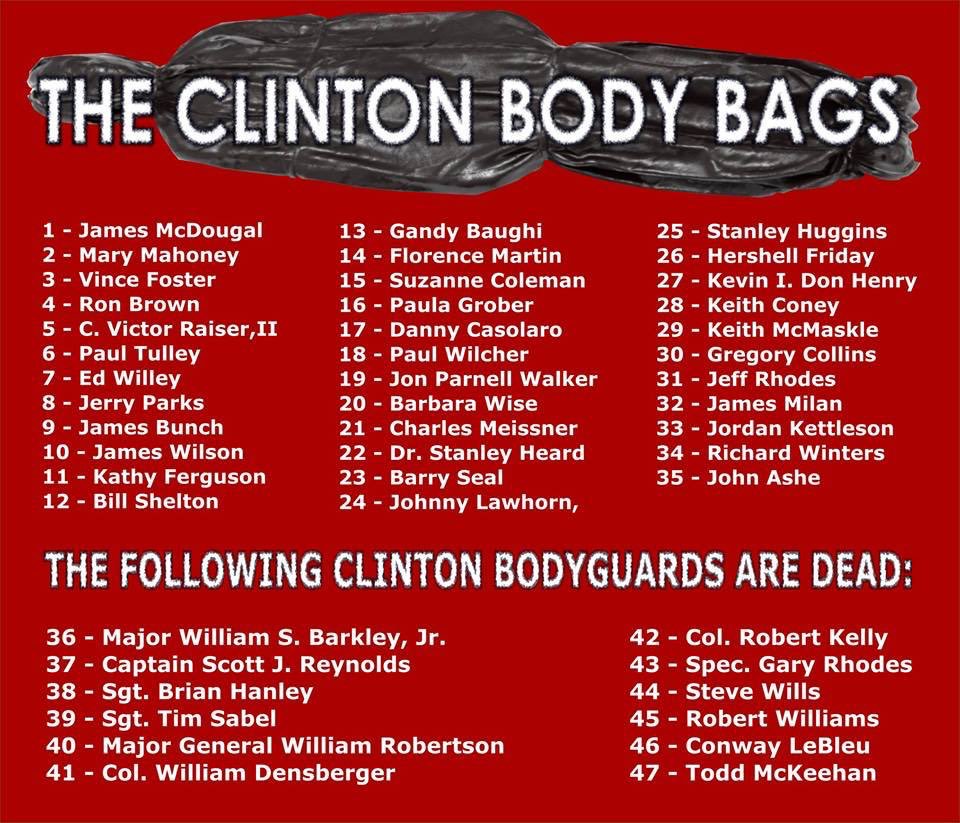 While outlets such as Snopes and others provide cover for Socialists, Communists, Islamists and the Sodomite movement, the fact is that they have also attempted to dismiss the claims that the Clinton Body Count isn’t real.  However, the list is so compelling that even CBS Las Vegas posted it, calling it a conspiracy theory.  Now, the Clinton friend and fellow traveller of the Lolita Express is alleged to have committed suicide, can we add billionaire Jeffrey Epstein to the long list of those who have had ties to the Clintons who have lost their lives in untimely deaths?  I think the majority of people in America would answer with a resounding, “Yes.”

I’ve already written two reports on Epstein’s alleged “suicide.”   In one of those, I call into question whether Epstein’s death was faked, and that relies heavily on what took place last month and the conflicting story of his cell and what is alleged to have happened to him, as well as the fact that not one person in the Manhattan area can attest to him going to the hospital, being in the morgue or getting past a rude gatekeeper manning the phones at the Manhattan Correction Center.

With that said, CBS did report in 2016 the following list of deceased people as being a part of the Clinton Body Count, or Clinton Dead Pool.

1- James McDougal – Clintons convicted Whitewater partner died of an apparent heart attack, while in solitary confinement. He was a key witness in Ken Starr’s investigation.

2 – Mary Mahoney – A former White House intern was murdered July 1997 at a Starbucks Coffee Shop in Georgetown .. The murder …happened just after she was to go public w:th her story of sexual harassment in the White House.

4 – Ron Brown – Secretary of Commerce and former DNC Chairman. Reported to have died by impact in a plane crash. A pathologist close to the investigation reported that there was a hole in the top of Brown’s skull resembling a gunshot wound. At the time of his death Brown was being investigated, and spoke publicly of his willingness to cut a deal with prosecutors. The rest of the people on the plane also died. A few days later the Air Traffic controller commited suicide.

7 – Ed Willey – Clinton fundraiser, found dead November 1993 deep in the woods in VA of a gunshot wound to the head. Ruled a suicide. Ed Willey died on the same day his wife Kathleen Willey claimed Bill Clinton groped her in the oval office in the White House. Ed Willey was involved in several Clinton fund raising events.

8 – Jerry Parks – Head of Clinton’s gubernatorial security team in Little Rock .. Gunned down in his car at a deserted intersection outside Little Rock Park’s son said his father was building a dossier on Clinton He allegedly threatened to reveal this information. After he died the files were mysteriously removed from his house.

9 – James Bunch – Died from a gunshot suicide. It was reported that he had a “Black Book” of people which contained names of influential people who visited prostitutes in Texas and Arkansas

10 – James Wilson – Was found dead in May 1993 from an apparent hanging suicide. He was reported to have ties to Whitewater..

12 – Bill Shelton – Arkansas State Trooper and fiancee of Kathy Ferguson. Critical of the suicide ruling of his fiancee, he was found dead in June, 1994 of a gunshot wound also ruled a suicide at the grave site of his fiancee.

13 – Gandy Baugh – Attorney for Clinton’s friend Dan Lassater, died by jumping out a window of a tall building January, 1994. His client was a convicted drug distributor.

15 – Suzanne Coleman – Reportedly had an affair with Clinton when he was Arkansas Attorney General. Died of a gunshot wound to the back of the head, ruled a suicide. Was pregnant at the time of her death.

17 – Danny Casolaro – Investigative reporter, investigating Mena Airport and Arkansas Development Finance Authority. He slit his wrists, apparently, in the middle of his investigation.

18 – Paul Wilcher – Attorney investigating corruption at Mena Airport with Casolaro and the 1980 “October Surprise” was found dead on a toilet June 22, 1993, in his Washington DC apartment had delivered a report to Janet Reno 3 weeks before his death.

20 – Barbara Wise – Commerce Department staffer. Worked closely with Ron Brown and John Huang. Cause of death: Unknown. Died November 29, 1996. Her bruised, naked body was found locked in her office at the Department of Commerce.

24 – Johnny Lawhorn, Jr. – Mechanic, found a check made out to Bill Clinton in the trunk of a car left at his repair shop. He was found dead after his car had hit a utility pole.

25 – Stanley Huggins – Investigated Madison Guaranty. His death was a purported suicide and his report was never released.

RELATED:  This is Why People are Angry, Cop With 90 Misconduct Complaints Promoted to Commander

27 – Kevin Ives & Don Henry – Known as “The boys on the track” case. Reports say the boys may have stumbled upon the Mena Arkansas airport drug operation. A controversial case, the initial report of death said, due to falling asleep on railroad tracks. Later reports claim the 2 boys had been slain before being placed on the tracks. Many linked to the case died before their testimony could come before a Grand Jury.

THE FOLLOWING PERSONS HAD INFORMATION ON THE IVES/HENRY CASE:

32 – James Milan – Found decapitated. However, the Coroner ruled his death was due to natural causes”.

And the most recent, Seth Rich, the DC staffer murdered and “robbed” (of nothing) on July 10. Wikileaks found Assange claims he had info on the DNC email scandal.

Not Included in this list are the 4 men killed in Benghazi.

This list also doesn’t include several who lost their lives, some quite impressively, in the run up to the 2016 elections.

These are just the latest bodies in a long trail of them around the Clintons. You may ask, are you claiming the Clintons had something to do with these five men’s deaths? No, but I am saying that the list of dead people around the Clintons is quite long and you have to admit that these deaths happening so close together should give you pause as to the official story that is coming out about each one, knowing Mrs. Clinton’s record for lying, deceit and endangering the lives of Americans.