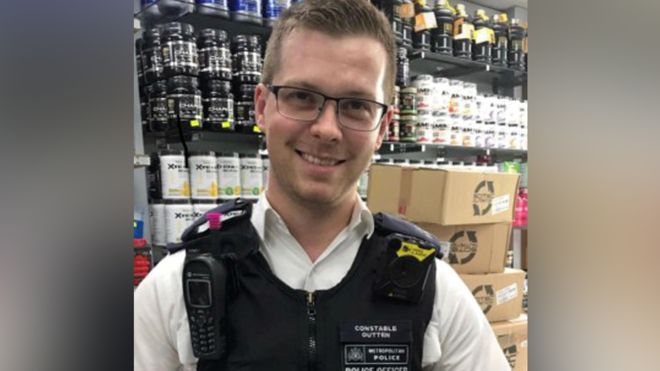 The UK is a mess and the lack of guns, coupled with growing cultural diversity just ended badly for a police officer.

Before we go on, let’s first provide some good news.

The police officer survived, despite what the above tweet implies.

He is recovering and likely to live after being struck in the head by a machete:

The family of a police officer who was attacked with a machete say they are “overwhelmed” by messages of support.

PC Stuart Outten, 28, was stabbed as he tried to stop a van suspected of having no insurance in Leyton, east London, in the early hours of Thursday.

The Met Police officer Tasered his assailant despite receiving multiple stab wounds to his head and body.

Mr Rodwan, who is British and of no fixed address, is also charged with possessing an offensive weapon.

He has been remanded in custody and will appear at the Old Bailey on 6 September.

The court heard PC Outten was in a serious but stable condition in hospital.

PC Outten, who has about a decade of police experience, suffered a wound to the side of his head which required stitches and needed an operation to a hand injury caused while trying to fend off the attack.

So a COP in the UK, stops someone for a traffic violation and gets hacked by a machete…

And they want us to just turn over our guns in America, so they can protect us?

It’s NOT going to happen…

Several UK sources are reporting that Outten was able to taser the suspect after being struck with the machete.

Otherwise the ending may not have been so encouraging.

Yesterday I reported that an ARMED firefighter probably saved another mass shooting from happening in Springfield, Missouri.

Where do you feel safer?

No one is taking our guns and, with all due respect, that includes you Mr. President.

Here are some examples of the 2nd amendment saving lives:

The UK is insane.

Who would want to live in a place where even the good guys don’t carry guns?

Prayers please for Stuart Outten and his family…