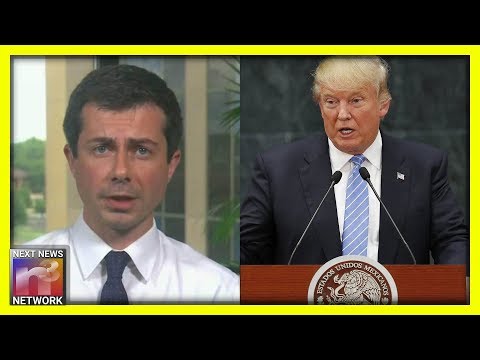 This couldn’t have happened to I mean gay guy. ***label confusion syndrome is real***

Here’s the report from our friends at Next News Network:

So they found out about Buttigieg’s voter scam?

He’s just trying to fit in with his fellow Demonrats. (note to self, use spellcheck)

Trouble could be looming for Democrat presidential candidate Pete Buttigieg after a conservative watchdog group filed a lawsuit to gain access to information over a voter id card program.

The lawsuit is seeking documents that would confirm that Buttigieg and his lackeys were using taxpayer funds to benefit illegal immigrants with the un-implied quid pro quo that they would repay the Democrats with their votes.

Following a blazing hot start for the mayor of smallish South Bend, Indiana, the liberal darling has plummeted in polls after a white police officer shot and killed a criminal of color who was coming at him with a knife.

The ensuing fallout put “Mayor Pete” on the spot between outraged black constituents demanding the officer’s head and his own police department which he stabbed in the back for political expediency.

Citizen: "Can you say it to us today in front of all these cameras that black lives matter?"

Mayor Pete Buttigieg: "Did you just ask me if black lives matter?"

Citizen: "Yes we want to hear you say it."

The controversy only underscored the problems that Buttigieg (pronounced Boot-Edge-Edge) has had with appealing to black voters despite his race-baiting demagoguery and puckering up to plant his lips on Al Sharpton’s buttocks.

Now he is facing even more problems with the Judicial Watch lawsuit that seeks to pry loose emails relating to a South Bend voter id card program for illegal immigrants.

Oh my goodness, puckering up to plant his lips on Al Sharpton’s buttocks?

If Mayor Pete is messing with voter rolls a little, he’s not alone.

We would expect no less from Democrats.

But maybe if a guy wants to be President, we should hold him to a higher standard.

Mayor Pete needs to clean up his act, and his own town, before making a serious run at being our next gay president.

Not that there is anything wrong with that. Isn’t that what I am supposed to say?

Well of course there is something wrong with it, but we are talking issues.

My biggest problem with Mayor Pete are his qualifications and stances on issues.

OK, I forgot to mention that he might be more than a vote fraudster.

He may also be a rapist.

Maybe he can go to work for The Clinton Foundation.

I’m pretty sure they hire rapists.

This guy needs to drop out NOW.

He has ZERO chance.