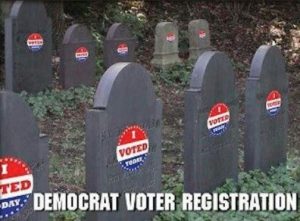 Democrats vehemently oppose voter identification (ID), claiming that requiring voter ID is a form of “voter suppression” because, for some inexplicable reason, requiring them to show their IDs especially would discourage and prevent people-of-color from voting.

But as The Daily Signal points out, voter ID laws are rooted in a desire to promote election integrity because election fraud has been and continues to plague U.S. elections, as can be seen in The Heritage Foundation’s election fraud database. Moreover, a recent study by the National Bureau of Economic Research shows that voter ID laws have no discernible effect on reducing the turnout of voters. Over the period 2008 to 2016, the researchers found that voter ID “laws have no negative effect on registration or turnout, overall or for any group defined by race, gender, age, or party affiliation.”

North Dakota is the only U.S. state that does not require citizens to register to vote. In that state, without having registered to vote, a resident can show up on Election Day and vote —as long you show identification.

North Dakota’s state legislature stipulates that a valid form of identification must show the voter’s legal name, current residential address, and date of birth. Valid IDs include a driver’s license, a nondriver’s ID card issued by the state Department of Motor Vehicles, or an “official form of identification issued by a tribal government to a tribal member residing in the state”.

However, even if an individual cannot produce one of the three acceptable IDs, North Dakota would still allow him/her to vote if s/he produces a current utility bill, bank statement, paycheck, or a check or other document issued by a federal, state, or local government agency.

Moreover, a prospective voter who cannot provide either a valid form of ID or a supplemental documentation like a bank statement, may still vote. But his/her ballot would be set aside until the voter presents an acceptable ID either before the close of the polls that day, or within 6 days to “an employee of the office of the election official responsible for the administration of the election.”

Despite the reasonableness of North Dakota’s voter ID law, in January 2016, six members of the Turtle Mountain Band of Chippewa Indians sued, claiming that the ID requirement restricted the ability of tribal members to register and exercise their right to vote, in violation of the U.S. Constitution, state law, and Section 2 of the Voting Rights Act of 1965.

As described in Court House News, the 6 Native American plaintiffs — Richard Brakebill, Dorothy Herman, Della Merrick, Elvis Norquay, Ray Norquay, Lucille Vivier — claimed that the ID requirement places an unconstitutional burden on the right to vote of many Native Americans because Native Americans in North Dakota are “disproportionately homeless” and “often live on reservations or in other rural areas where people do not have street addresses; even if they do … those addresses are frequently not included on tribal IDs.” It must be noted that the six plaintiffs themselves all have residential addresses.

On August 1, 2016, the U.S. District Court for the District of North Dakota – Bismarck granted the plaintiffs’ motion for a preliminary injunction, on the grounds that voter ID imposes “excessively burdensome requirements” on Native American voters in North Dakota which outweigh the State’s asserted interests. The district court cited statistical evidence that North Dakota’s voter ID law would prevent 2,305 Native Americans from voting because they did not possess a valid ID.

On July 31, 2019, in a 2-1 decision, the 3-judge panel of the 8th U.S. Circuit Court of Appeals reinstated North Dakota’s voter ID requirement and tossed out the lower district court’s injunction. The three judges are:

In Brakebill et al. v. Jaeger, Judge Steven Colloton writes for the 2-to-1 majority (it’s no mystery who the dissenting judge is):