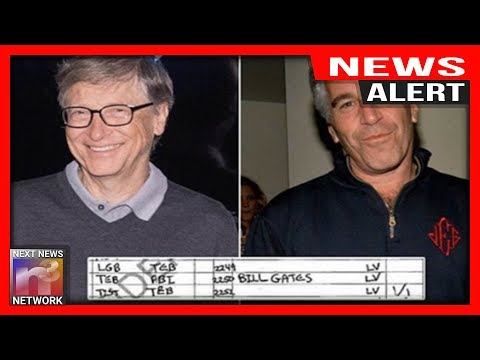 Now that Epstein is dead and gone, a lot of truth is starting to come out about his associates.

The latest is not a big shocker, but now it’s fact and not just more speculation.

Paris Wade from Political Entertainment Network reports, Billionaire Bill Gates flew with Jeffrey Epstein on his private jet named the “Lolita Express” four years after he served time for soliciting a minor under the age of 18. Flight records show that Gates flew with Epstein to Teterboro Airport in New Jersey to Palm Beach on March 1, 2013.

Billionaire Bill Gates flew with Jeffrey Epstein on his private jet named the “Lolita Express” four years after he served time for soliciting a minor under the age of 18. Flight records show that Gates flew with Epstein to Teterboro Airport in New Jersey to Palm Beach on March 1, 2013.

A representative for Gates has not responded for a request for comment and many people are saying that the pair being together is odd considering that Melinda Gates had a charity aimed at young women around the world at the same time.

Epstein claimed that he was a financial adviser to Gates, but the Microsoft founder’s representatives say that is not true. It is true that both men own property in southern Florida. Gates owned a five property compound in Wellington that he purchased for $40 million and Epstein had two homes including a $12 million Palm Beach mansion.

Here are the flight logs below showing Bill Gates’ name.

In a biography that was published for Edge, noted that Epstein “founded the Jeffrey Epstein VI Foundation in 2000 to fund cutting edge science around the world.” Epstein was also a huge supporter of Stephen Hawking and Nobel Laureates Gerard’t Hooft, David Gross and Frank Wilczek.

There were many famous passengers on Epstein’s jet including Bill Clinton, Naomi Campbell, Kevin Spacey, Chris Tucker and Prince Andrew. Two of Epstein’s “sex slaves” have claimed that they engaged in sexual acts with Prince Andrew.

Do you think that it is suspicious that Bill Gate rode with Epstein?

Not at all suspicious.

Expected is a better description.

The elites have their own set of rules and I am not at all shocked.

Bill Gates is an insane, power-tripping elitist with a god-complex:

Maybe it was legitimate business.

But if it was, why fly on the Lolita Express and not just meet somewhere for business?

We may never know, but…

We can’t really be shocked to hear of any of the powerful elite being associated with Epstein.

Bill Gates knew who Epstein was and still chose to associate with him, business or NOT.