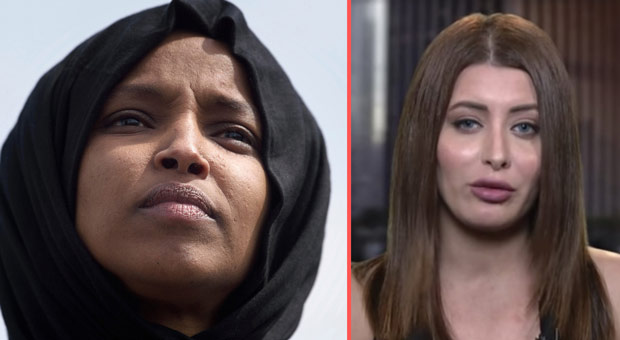 Editor’s Note:  I applaud this woman for speaking out.  At the same time, she needs to understand, as many others need to understand, Islam cannot be reformed as Christianity was when it delivered a death blow to the papacy during the Reformation because the Reformers took away from the tyrants in the Roman Catholic Church their power of twisting the Scriptures and sought to let the Scriptures speak for themselves.  If Islam attempts to do that, they will inevitably get the true Islam, which is the one we are continually warning people about.  As Turkish President Erdogan said, there is no moderate Islam, only Islam.

TEL AVIV – A former Miss Iraq who was forced to flee her native country after posting a selfie of herself and Miss Israel has lambasted Rep. Ilhan Omar for trying to push Sharia law on the U.S. and says that the congresswoman does not represent her as a Muslim.

“You know like in Arab countries we call her the Muslim Brotherhood,” she added.

In an interview with i24 news, Idan expanded on the accusation, saying, “It’s an ideology of trying to push Islam to make it the ruling system of the country.”

She continued by saying that Omar angered a lot of Muslims in the U.S. because she always says, “I speak for every Muslim in this country.”

“She made a lot of us angry — moderate Muslims who escaped Sharia, who are trying to push for moderate Islam and a reform of Islam,” Idan said.

In an earlier tweet, Idan described the Minnesota Representative’s agenda as “anti-American.”

“Seriously @IlhanMN this is your intellectual come back?” she asked. “I said as a MUSLIM! I dont stand for your anti-American, anti-Semitic, Muslim Brotherhood agenda using this democracy to further YOUR & YOUR FRIENDS Islamic socialism goals of dividing & weakening our country.”

The former Miss Universe contestant, who grew up in Iraq under the regime of Saddam Hussein, fled the country after receiving threats that her Iraqi citizenship would be withdrawn because she posted a selfie with Miss Israel.