Finish chewing any food in your mouth and proceed with caution because, momentarily, I am going to show you an image that might make… 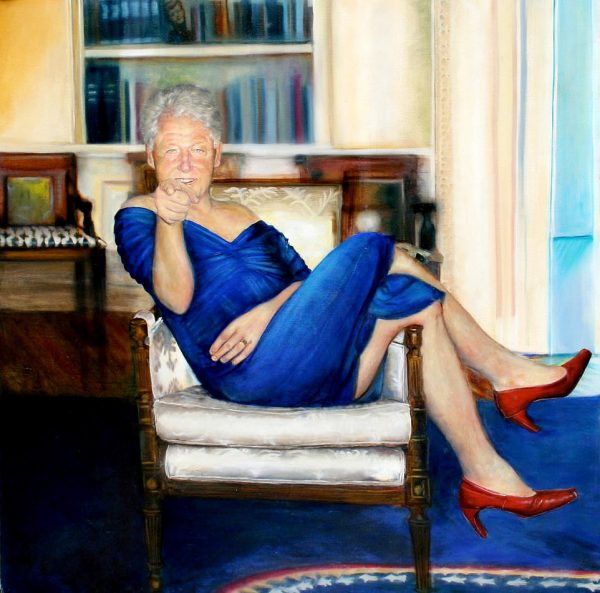 I may have thrown up a little in my mouth just now.

The above painting is supposedly residing somewhere in Jeffrey Epstein’s Manhattan mansion.

What is a painting of Wild Bill in a blue dress worth?

I would be very interested in what this painting would draw at auction.

I bet it would be enough to fuel the Epstein investigation for awhile.

I’m also fairly certain that an anonymous bidder might pay more than an open bidder, because…

Who would like to be known as the pervert who bought that painting?

Even more disgustingly intriguing is what kind of a sicko, or sickos, would find a thrill from Billy Boy in a blue dress?

Still the finding of this painting is hilarious, but possibly significant.

Did Bill Clinton know about this painting?

If he did, then I think it is safe to say that this is just another mark on his legacy, if he even cares.

I would think this would make Bill Clinton more likely to try to keep Epstein alive than have him killed.

I mean, if Bill knew about the painting, he definitely did not want the day to come when it would be revealed to the public.

Here’s the story from our friends at PJ Media:

A photo of a bizarre portrait of Bill Clinton wearing a blue dress and red high heels was secretly taken at pervert Jeffrey Epstein’s Manhattan mansion in October 2012. The Daily Mail on Wednesday published the photo, which was given to them by a source who had visited Epstein to present a business proposal.

EXCLUSIVE: Why Did Jeffrey Epstein have a painting of Bill Clinton wearing a blue DRESS and red heels inside his mansion? https://t.co/MaUAQ5xo97 pic.twitter.com/OWq9qvuKER

The painting shows the former president flirtatiously lounging on a chair in what looks like the Oval Office, wearing red heels and a blue dress reminiscent of Monica Lewinsky. The source said it was situated in a room off the stairway of the pedophile’s lavish $56 million Upper East Side townhouse.

The painting, titled “I want you,” is by Australian-American artist Petrina Ryan-Kleid, the Daily Mail reported. It wasn’t immediately clear whether Epstein had bought the canvas or had a print mounted.

Jeffrey Epstein had a bizarre portrait of Bill Clinton in a dress hanging in his Manhattan mansion, DailyMailTV can reveal.
The picture depicting the former president apparently lounging on a chair in the Oval Office, wearing red heels and posing suggestively in a blue dress-D.M. pic.twitter.com/sL0yegKKLJ

The source told the Daily Mail that during her visit that she also spotted a girl who seemed to be around 14 years old waiting to see Epstein.

There was a New York Times article out recently that talked about the dirt Epstein had on his clients.

I wonder if this was some of that dirt?

Maybe it was a discreet present from Bill himself.

They say that a picture paints a thousand words and in this case that may be an understatement.

We will never likely know, but we will keep digging.

More on the Clinton-Epstein Connection: