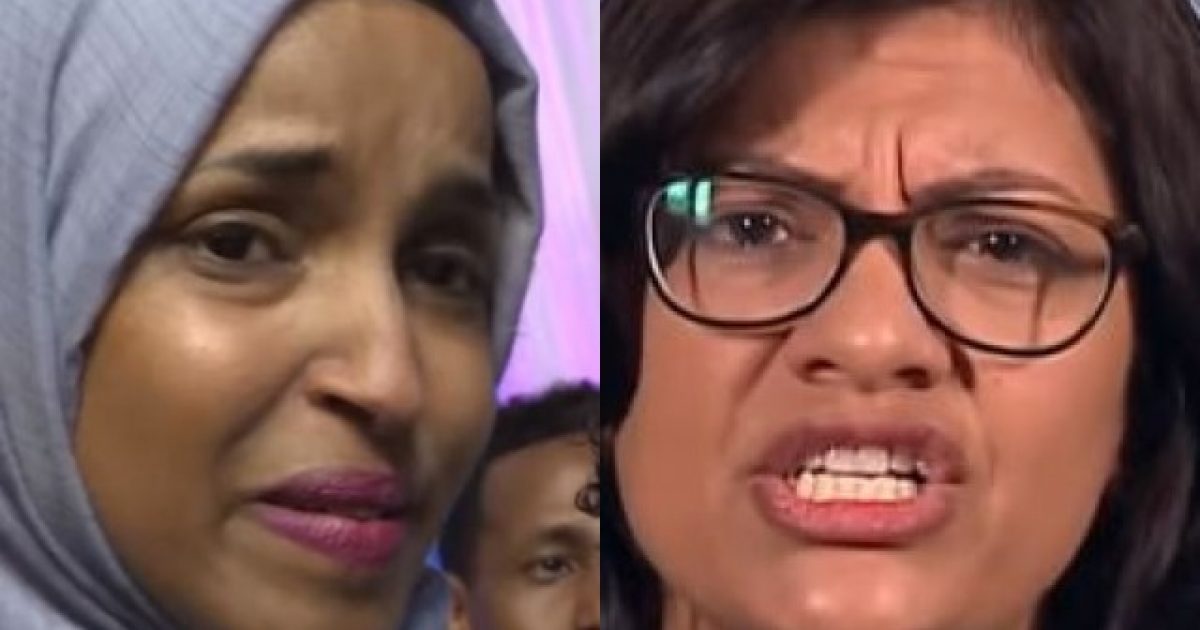 Netanyahu took to Twitter to explain why Israel is denying entrance of Tlaib and Omar into Israel and it’s a lot bigger than the fact that the two women hate Israel and Jews.

In a series of tweets Netanyahu said the following:

“No country in the world respects America and the American Congress more than the State of Israel.
As a free and vibrant democracy, Israel is open to critics and criticism with one exception: Israeli law prohibits the entry into Israel of those who call for and work to impose boycotts on Israel, as do other democracies that prohibit the entry of people who seek to harm the country,” he said.

“In fact, in the past the US did this to an Israeli member of Knesset, as well as to other public figures from around the world.

Congresswomen Tlaib and Omar are leading activists in promoting the legislation of boycotts against Israel in the American Congress.”

“Only a few days ago, we received their itinerary for their visit in Israel, which revealed that they planned a visit whose sole objective is to strengthen the boycott against us and deny Israel’s legitimacy.”

“For instance: they listed the destination of their trip as Palestine and not Israel, and unlike all Democratic and Republican members of Congress who have visited Israel, they did not request to meet any Israeli officials, either from the government or the opposition.”

“A week ago, Israel warmly welcomed some 70 Democratic and Republican members of Congress, who expressed broad bipartisan support for Israel, which was also demonstrated a month ago in a resounding bipartisan vote against BDS in Congress.”

“However, the itinerary of the two Congresswomen reveals that the sole purpose of their visit is to harm Israel and increase incitement against it.”

Calvin Custis at The Federalist Papers has more:

Liberals immediately cried “racism.” Because of course they did.

It is disgusting that a bigot like Trump is attacking @RashidaTlaib and @IlhanMN in this way. Opposing Netanyahu's policies is not “hating the Jewish people.” We must stand together against those who promote hatred and racism in Israel, Palestine, the U.S. and everywhere. https://t.co/Sq8FikcumK

Israel doesn't advance its case as a tolerant democracy or unwavering US ally by barring elected members of Congress from visiting because of their political views. This would be a shameful, unprecedented move. I urge Israel’s government to allow @IlhanMN and @RashidaTlaib entry.

Visiting Israel & Palestine are key experiences towards a path to peace.

Sadly, I cannot move forward w scheduling any visits to Israel until all members of Congress are allowed. https://t.co/WTP5vnt5IH

This woman right here is my sity. She deserves to live in peace & with human dignity. I am who I am because of her. The decision by Israel to bar her granddaughter, a U.S. Congresswoman, is a sign of weakness b/c the truth of what is happening to Palestinians is frightening. pic.twitter.com/GGcFLiH9N3

But, as it turns out, that news was only the beginning.

Prime Minister Netanyahu went on to explain that his decision to bar the two Congresswomen was based primarily on the disturbing details surrounding who exactly was funding their trip.

In a bombshell announcement, Netanyahu revealed to the world that a terrorist-backed organization was footing the bill.

In addition, the organization that is funding their trip is Miftah, which is an avid supporter of BDS, and among whose members are those who have expressed support for terrorism against Israel.

Therefore, the minister of interior has decided not to allow their visit, and I, as prime minister, support his decision.

So, what exactly is Mifta and what are their connections to terrorism that convinced PM Netanyahu to cancel their trip?

In a January 2017 interview for Deutsche Welle, founder and chair of the Miftah board of directors Hanan Ashrawi claimed that Palestinian “attacks and their perpetrators” (as described by the interviewer, Tim Sebastian) “are seen by the people as resistance. And you cannot somehow adopt the language of either the international community or the occupier by describing anybody who resists as terrorist (sic)” (3:20).

Described Wafa Idrees, one of the first female Palestinian suicide bombers, as “the beginning of a string of Palestinian women dedicated to sacrificing their lives for the cause.” Idrees detonated herself on January 27, 2002, killing 81 year-old Pinhas Takatli and wounding another 150 Israeli civilians. She is described as one of the “several young women” who “decided to join the ranks of the resistance movement.”

Twitchy goes even farther in their article on the group:

In his explanation for the decision to bar Reps. Ilhan Omar and Rashida Tlaib from visiting Israel (except under a very specific condition in Tlaib’s case), Israeli Prime Minister Benjamin Netanyahu cited their itinerary and offered up some insight into the organization that was sponsoring their trip to “Palestine”:

In addition, the organization that is funding their trip is Miftah, which is an avid supporter of BDS, and among whose members are those who have expressed support for terrorism against Israel.

Turns out that that was only scratching the surface:

Instead you get reports by @washingtonpost & others which omit how the itinerary referred to Israel–and what that tells us, and which whitewash an org that has made numerous antisemitic statements. https://t.co/qc9exEDRrA

Per the itinerary, both lawmakers were also going to meet with an NGO, DCI-P, which has links to terrorist organizations. On what basis is it a good idea–either for Israel or the U.S.–to allow lawmakers to meet w a group that has ties to PFLP? https://t.co/PGgeKlwko2

Tell me: Why aren't Western news outlets reporting that U.S. lawmakers were attending a trip sponsored by an organization that claims Jews "use the blood of Christians"? Or that they're meeting w groups that have ties to the PFLP, a U.S.-designated terror group. https://t.co/7PYSQRo6a3

What do you think of this terrifying turn of events?