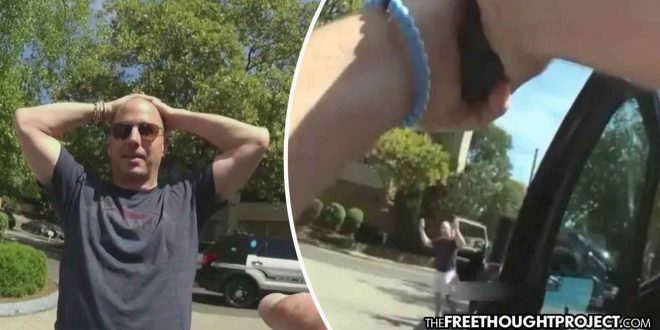 Darien, CT — As we constantly repeat here at the Free Thought Project, being entirely innocent is no defense against getting harassed or abused by police officers. As the following video illustrates, even being the famous General Manager for the New York Yankees is no defense against cops holding you at gunpoint—for stealing your own car.

Last week, Brian Cashman, the GM for the Yankees, was driving his white Jeep Wrangler, when cops accused him of stealing his own car. He was subsequently ordered out of the car as multiple officers trained their guns on him, barking orders.

“Put your hands out the window!” an officer shouts after pulling over Cashman.

Afraid of being killed, Cashman complies, puts his hands in the air and walks to the back of the vehicle.

Cashman attempts to explain to the police that his car had been stolen but it was already recovered by the NYPD and he was bringing it to police in Norwalk for an evidence check.

“I picked it up,” he starts to explain.

However, he is quickly cut off by one of the cops, who says, “Understood sir, we’ll talk to you in a second.”

“I know but it was taken off by the NYPD a few day ago,” the GM says, noting that the car was recovered and should have been removed from a list of stolen vehicles already.

“And we all know how they are, all right?” the cop responds sarcastically.

After interrogating him, holding him at gunpoint, and accusing him of stealing his own car, police finally began to realize it was incompetence which led to the innocent man being threatened with deadly weapons.

“You look very familiar to me,” an officer says who recognizes Cashman.

“I’m the GM of the New York Yankees,” Cashman explains.

“Yeah, I know,” the cop answers. “I used to see you at Brook Street Bagels when I was an Eastchester cop. I apologize for the embarrassment.”

“Clear it,” the cop then tells the other officers. “Clear it. Turn all the lights off and we’re good. No spectacle.”

An officer in plainclothes then comes over and tells Cashman apologetically that police had received a report of “a guy with a gun at a doctor’s office driving a white Jeep, and then I ran your plates and they came back stolen.”

“I didn’t want to say, ‘It’s Brian Cashman over the radio,’” an officer can be heard saying in embarrassment on the body camera footage.

The cop then laughs and jokes, “Now you’ve got a story for the guys.”

Cashman, who lives in the village of Rowayton in Norwalk, said last week the Jeep was stolen a week earlier and found dumped in The Bronx.

Cops there towed the vehicle to a local repair shop, where Cashman picked it up on Aug. 7, a Wednesday.

He then arranged to drive it to Norwalk police headquarters on Friday so they could “process it” for any evidence of the theft. That’s what he was doing when he ran into the cops in Darien.

After the incident, he told The Post that he had no hard feelings toward the officers.

“I had a welcoming committee descend up on me as I pulled out of the gas station,” Cashman told the NY Post. “They executed a very tactful interception.

“I have high respect for all law enforcement. They do an amazing job, whether you’re in Connecticut or New York City. Sometimes, unique circumstances occur.”

Cashman explained that the cops even gave him an escort so he could drop off the car for an evidence check.

“The public should take encouragement when someone is in a stolen vehicle — they’re not going to get very far,” Cashman said jokingly.

While Cashman came out of the situation unscathed, others — namely persons of color — have been beaten, arrested, and even shot for the exact same circumstances. Police escorts for wrongly accused individuals must be reserved only for high profile Yankees general managers.

As TFTP reported earlier this year, even women have been beaten by cops after being wrongly accused of stealing their own car.

In February, Khalil Harvin had harmed no one, and had committed no crime when she was arrested and put into handcuffs by two Philadelphia cops. The officers stopped the vehicle Harvin was in because they claimed it was stolen. However, it was not.

Just like Cashman, the vehicle was previously stolen but police forgot to take it off the list when it was found. But instead of an escort, Harvin was attacked, smashed to the pavement and kidnapped. Luckily, all charges were eventually dropped, but not before this innocent woman suffered a violent fate at the hands of Philly cops.

While Harvin was only beaten and arrested, TFTP has reported on an incident in which a man wrongfully accused of stealing his own car was shot.

Lyndo Jones is lucky to be alive after his encounter with police in November 2017 left him with severe injuries that forced him to spend several days in the intensive care unit. Footage from the night Jones was shot was released last year, and it shows that the officer who confronted him was agitated from the start.

Like the cops in Connecticut, officer Derick Wiley, a 10-year veteran of the Mesquite Police Department, started by approaching the vehicle with his gun raised, pointed at Jones, who was sitting the driver’s seat.

“Put your hands up! Or I will f—king shoot you,” Wiley yelled as soon as Jones started to slowly open the door.

As Jones complied with all the officers commands, the officer decided to shoot him anyway—twice—in the back as he was laying on the ground with his hands behind his back.

It is quite telling how differently Cashman was treated versus the two other victims mentioned above.