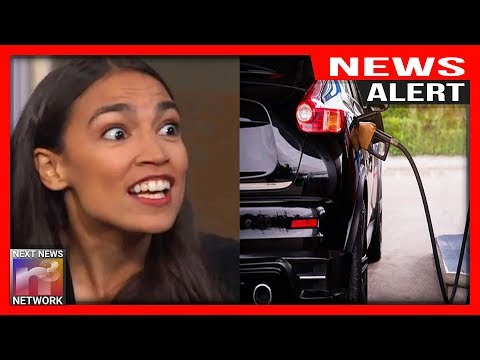 Politicians like Alexandria Ocasio Cortez represent a crossroads decision for the Democrats.

Do they continue to push the limits of crazy or do they return to a more moderate posture?

You won’t believe what she is saying now about YOUR favorite mode of transportation.

While we are at it let’s eliminate garbage disposals, as much as possible, because they simply confuse people like the freshman congresswoman:

Ocasio-Cortez reminds me of some of the stoners I used to sit in a circle with back in my wasted days.

“Woah, what if we just got rid of all the cars and moved everything closer to our house so we could just walk?”

“Yeah and then they couldn’t f*** with us because it’s not illegal to walk stoned.”

“Yeah AOC, I agree. You should run for President someday.”

It’s been awhile and I honestly don’t miss those days but in defense of those who may occasionally, or even regularly, partake of the green stuff — I full-well realize that most of you are much smarter than this woman.

Prepare yourself to lose a little more pride in our educational system when you hear about Alexandria Ocasio-Cortez’ most recent comments regarding eliminating gas-powered vehicles.

Rep. Alexandria Ocasio-Cortez (D-N.Y.) said that gas-powered vehicles must be eliminated as much as possible in order for everyone to survive.

“Would you like to see gasoline-powered vehicles gone within 12 years?” an interviewer asked her.

“Well as much as it is technologically possible I think we need to draw down our fossil fuels as much as we possibly can,” she responded. “I don’t think we should build another pipeline at all in the United States of America.

You can see the interview in the tweet below:

AOC says we must eliminate cars "as much as we possibly can" and no more pipelines can be built in the U.S.

"It's a matter of our survival."

"I don't even think it's a matter of political opinion. It's scientific fact" pic.twitter.com/VJm0YbGFsb

Think about where AOC is SUPPOSEDLY from and you might understand that cars are not a big thing in a congested city.

A lot of people depend on taxis and may not even bother obtaining driver’s licenses that they will never use.

So why should we expect AOC to know about how most of Americans are dependent on cars and garbage disposals?

AOC may seem like an idiot to many, but she is also a very smooth politician when she needs to be.

Don’t buy into her idiot act.

Some of the most powerful Democrats have made careers of playing the village idiot role:

Is this what the Democrats will continue to be?

A party of village idiots and degenerates?

Hopefully the donkeys take a serious swing back toward the middle in 2020 so we can focus more on sound policies and less on divisive politics.