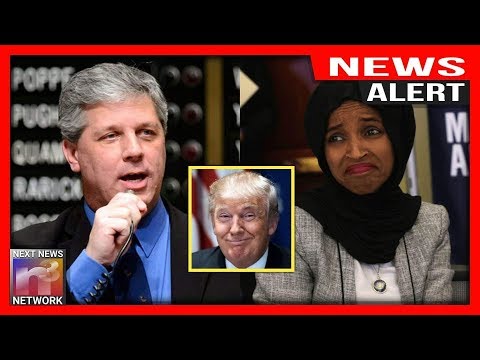 She is a bigamist, a bigot, and a whole lot of things that we could write an entire book about.

Finally someone is stepping up to try to do something about it.

This has been brewing for awhile.

The biggest newspaper in Minnesota turned against Omar and Dems have been scrambling to primary her for 2020:

Now the state Republicans have the same goal in mind — to end Omar!

Here’s more from The Minnesota Sun:

State Rep. Steve Drazkowski (R-Mazeppa) announced Tuesday that he is submitting formal requests to the IRS and the Minnesota Department of Revenue for a full investigation into Rep. Ilhan Omar’s (D-MN-05) fraudulent 2014 and 2015 tax returns.

As The Minnesota Sun reported, Omar filed joint tax returns in 2014 and 2015 with Ahmed Hirsi, even though she was married to Ahmed Nur Said Elmi from 2009 to 2017. Omar claims that she “corrected” those tax returns, though Drazkowski alleges that she may have improperly used campaign funds to do so.

“I am very pleased that several of my colleagues here in the Minnesota House are joining me in this effort,” he said. “More and more people are beginning to realize that Rep. Omar’s deceptive conduct is unacceptable. The people deserve answers.”

According to a press release from Drazkowski’s office, the requests also ask both agencies to examine “improper payments” Omar accepted for speaking at various Minnesota colleges. During the time of her speeches, she was a member of the Minnesota Legislature and served on the Higher Education Committee, meaning she oversaw the budgets for the institutions she accepted payments from.

Ilhan Omar is embroiled in so many controversies, that eventually something has to stick:

And just yesterday we ran a story that confirmed what we already suspect:

Sharia Law in the US?

Not going to happen.

We love our bacon and don’t necessarily trust those who do not, at least where I am from.

Muslims are infiltrating our elected offices and if you think it’s because they love America, you’d be wrong.

They have a vision of America as a Muslim nation.

“One Nation Under Allah” is their goal.

That WILL NEVER happen.

Not on our watch.